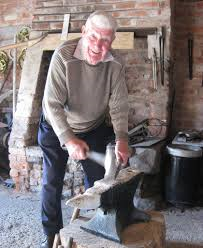 Barney is the 94 year old blacksmith at Castledawson,  County Londonderry in Northern Ireland. He worked in the smithy there, when Seamus Heaney, the Nobel Laureate poet, was growing up in the local 'Mossbawn Farm', the first of nine children. He walked past the smithy on his way to school in the 1940s, when Barney was hammering at the anvil inside, a young smithy in his twenties. He didn't go inside but knew and spoke to Barney, both in their Northern Irish, English. Barney recalled that : "He walked up the side of the road for years on his way to school."

In 1969, when he was 49 and Seamus 30, he composed his poem, 'The Forge' and as a result "the visitors came in carloads. One day Seamus came himself and I'll never forget it. People don't realise it but he actually wrote the poem before he even crossed the dark door. When he arrived he laughed because everything was in place as he wrote it."

All I know is a door into the dark.
Outside, old axles and iron hoops rusting;
Inside, the hammered anvil’s short-pitched ring,
The unpredictable fantail of sparks
Or hiss when a new shoe toughens in water.
The anvil must be somewhere in the centre,
Horned as a unicorn, at one end and square,
Set there immoveable: an altar
Where he expends himself in shape and music.
Sometimes, leather-aproned, hairs in his nose,
He leans out on the jamb, recalls a clatter
Of hoofs where traffic is flashing in rows;
Then grunts and goes in, with a slam and flick
To beat real iron out, to work the bellows

Sesamus died last year, at the age of 74. Barney has an enlarged photograph of himself with him above the television in the family home and in a frame, a handwritten version of 'The Forge', with Seamus's comment : 'Hammer on Barney.'
Barney has said that when he learnt of his death it "annoyed me immensely. He was a grand fella and I knew all of his family. He'll be sadly missed.Seamus was a very humble man known for his poetry yes, but locally known for his football, farming, humour and community spirit."

Barney's forge has been well preserved and become a tourist attraction and it was here, this year, that Barney was interviewed for BBC's 'Countryfile' tv programme at the forge, about its association with Seamus. This was broadcast on Sunday and has raised emotions, since in production, the decision to add subtitles for Barney's Northern Irish speech. https://www.youtube.com/watch?v=IqWGTeBcxYg

The BBC has said : "No offence was intended. We wanted as wide an audience as possible to appreciate Barney Devlin's evocative memories of blacksmithing and of Seamus Heaney. We discussed with Mr Devlin using subtitles and he was happy for this to happen."
One wonders, however, if they would have been added if Barney had been 34 and not 94 ?  Either way, Barney's treatment has united both sides of the political divide in Northern Ireland.

The Sinn Féin MP for the area, Francie Molloy, was unappeased. Speaking to BBC Radio Ulster, said he was very unhappy with the programme : "I think this is part of an ongoing process by the BBC of insulting the Irish people both in culture and language, in this occasion putting subtitles over the voice. The subtitles were only coming up for Barney and in other episodes of the programme which covers different parts of the country, indeed the world, it's very seldom that you do see subtitles being used. Seamus Heaney was from the same part of the country and he was never subtitled. The people of south Derry have complained to us so we're passing that on to the BBC."

: "I felt that what Barney had to say was relatively distinct and that the use of subtitles was both unnecessary and somewhat insulting to a 94-year-old man. I sometimes see Countryfile and I can't remember another occasion, despite the wide range of accents you hear in the United Kingdom, that I saw somebody subtitled. Somebody at the BBC has acted in a slightly patronising and unnecessary way."

Ian Milne, Mid Ulster Sinn Fein, M.L.A, claimed to be “shocked” by the use of subtitles, demanded an apology and told the Mid Ulster Mail that : “Following the death of Heaney last year, Devlin was interviewed by media organisations from across the world, including the BBC and they did not see the need for subtitles. This has caused anger in the local community who are insulted by this unnecessary move. It is yet another example of the BBC’s lack of respect for Irish people and culture.” 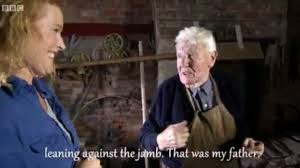 Labels: Barney Devlin and The Forge