Born in the first summer of the Second World War in 1940, Ken Clarke is 79 years old and has been in politics for most of his life. In fact, he first became a Conservative Member of Parliament at the age of 29, fifty years ago. Earlier this week he joined 20 other rebel Conservative MPs to vote against his own Conservative Government led by Prime Minister Boris Johnson. Effectively, they helped block Johnson's "No Deal" Brexit plan from proceeding on 31 October. Subsequently, all 21 were told that they were no longer they were members of the Conservative Parliamentary Party and would be barred from putting themselves forward as Conservative candidates in a future general election.

In one fell swoop Prime Minister Johnson had put an end to Ken's 50 year career as a a professional politician. He is well-respected and is currently Father of the House and had held all the great offices of state under Prime Ministers Heath, Thatcher, Major and Cameron having served as Chancellor of the Exchequer, Home Secretary, Justice Secretary, Health Secretary and Education Secretary.

Interviewed after his ejection he said that he no longer recognised the present Conservative Party, referring to it as "the Brexit party, rebadged". Referring to Prime Minister Johnson he said :"It’s been taken over by a rather knockabout sort of character, who’s got this bizarre crash-it-through philosophy … a Cabinet which is the most right-wing Cabinet any Conservative Party has ever produced."

Interviewed in the Observer today he reflected that he first became a Conservative MP when Boris Johnson was “a small toddler” and before he was born first came in Tory politics. He first attended a Conservative party conference as a student in 1962, where he supported Harold Macmillan’s application to join the Common Market against the fierce opposition of the imperialist wing of the Tory party and recalled : “I was one of the students who was going around wearing a ‘Yes’ badge.” Asked if he were a 20-year old student again would he make a different choice he said : “In its present state, I would not join the Conservative party. I would not follow Boris Johnson in this wild, rightwing nationalist stuff. The party wasn’t like that when I joined.”

Another Tory grandee and one of the 21, is the 71 year old Sir Nicholas Soames, who has served as an MP from the age of 35 in 1983. He hadn't risen as high as Ken in Government, but he had been a former Conservative Defence Minister and the grandson of Winston Churchill and he admitted that he, unlike Ken, had shed a tear this week when he was told that he had lost the Conservative whip for rebelling over a no-deal Brexit after 37 years as an MP : “I did blub actually, it was a sad moment. I was very emotional. I don’t want to end like this particularly as I am so far from being a serial rebel.”

He told 'The Times' : “I am worried about the Tory party because . . . give or take the odd spasm we have always been seen as pragmatic, sensible, good at our job, sane, reasonable and having the interests of the whole country and now it is beginning to look like a Brexit sect.” 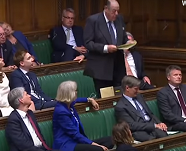 He told the House of Commons : ‘I’m truly very sad that it should end in this way and it is my most fervent hope that this house will rediscover the spirit of compromise, humility and understanding that will enable us finally to push ahead with the vital work in the interests of the whole country that has inevitably had to be so sadly neglected whilst we have devoted so much time to wrestling with Brexit’
https://www.youtube.com/watch?v=awA6D5k5VI8