Why in Britain, a country besieged by coronavirus, is Barrow-in-Furness the most dangerous town for old men ? 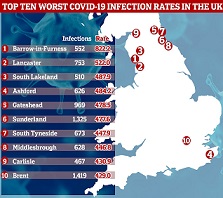 According to Government figures, 552 people in Barrow, mostly old man and women and more old men than old women, have so far been infected with coronavirus. Put starkly, the average infection rate per 100,000 people is :

The high rate of infection in Barrow, naturally, continues to cause concern locally and Lee Roberts, Deputy leader of Barrow Borough Council, has complained that he has not seen any data analysis looking into the figures. He has his own theories, such as high levels of deprivation among the densely packed terraces and has said :

This link between poverty and a high level of infection is backed by figures from the Office for National Statistics this month, which showed that those living in the poorest parts of England and Wales were dying at twice the rate of those in the richest areas.

In addition, the constituency of Barrow in Furness has higher than average levels of asthma, chronic obstructive pulmonary disease, diabetes, high blood pressure and obesity, all of which are known to be risk factors for coronavirus. Lee said : “We have quite a lot of historic respiratory problems from people who worked in old industry, in the ship yards."

Yet perhaps the biggest factor is that the town's economy is reliant on a BAE Systems shipyard and plant where nuclear submarines are built and which employ almost 10,000 workers. Kevin Hamilton, Mayor of Barrow Borough Council, said :

“You can’t build nuclear submarines while working from home. Not unless you have a very big bath. There are 9,500 people who work there and we know that one or two of them had the virus in early March, so that’s potentially a lot of people being exposed right there.” Indeed, even after lockdown, some 1,500 people remained working on site building the new Astute-class submarines.

He also backed up Lee's point about the connection with housing : “About 50 per cent of Barrow’s housing is terraced. You can’t social distance in those kinds of streets. That immediately means a greater likelihood of spread before restrictions were imposed.”

Finally, Barrow’s population is also older than average. It has a disproportionate number of old men and women with 22.7% of residents aged 65 to 90, compared with the England average of 18.3%.

Lee said : “You would hope some sort of spike would attract some sort of resource to come in and help. You’d want someone to say: ‘We better look at that to see if we can learn from it.’ But so far we haven’t had any detailed information. What I would hope for is some sort of deeper analysis, which we have been pushing for.” Kevin said that he had contacted the Government Health Secretary, but had heard nothing. “You would expect some kind of communication as soon as there figures were known, if only because the Government wanted to understand the disease more, As far as I’m aware, there’s been nothing.”

One woman, who spoke to the press and asked not to be named, said : “It’s so clear to myself and other residents that the high numbers here are the result of an outbreak at the shipyard. The main office blocks share stairwells and thousands of people are going through the same 12 turnstiles. Because the ‘customer’ for BAE Systems is ultimately the Government, at every step the company was forced to follow the government advice. In reality, with workers falling sick and confirmed cases in large shared offices, common sense should’ve seen most people sent home earlier.”

Colin Cox, Cumbria’s Director of Public Health, said the high infection rate may also be skewed by the fact Barrow is testing more people for the virus than other towns. "The rate of testing in Barrow has been two to three times higher than in many other parts of the north-west, so that will explain a fair chunk of it, but I don't think it will explain all of it."

He also said : “I am aware of lots of speculation about the possible effect of the staffing of the shipyard, but I have seen no evidence yet that would support this. I have however had a number of conversations with BAE about their plans for establishing safe systems of work and I know that they have been taking very seriously their responsibilities to their workforce and the wider community.”

BAE Systems have said : “We strongly reject the suggestion that we have adversely contributed to the coronavirus infection rate in the Barrow area. Contrary to any assertion otherwise, we have

* while introducing preventative measures to protect the safety of our employees.

* We took the decision to send the vast majority of our employees home before the Government announced the national lockdown.

* Since then, more than 4,500 employees have been working from home.

* We have restricted access on our site with fewer than one in five employees back at work and have put in place a number of measures to adhere to safety and social distancing guidelines.

*We continue to work closely with local authorities as we play our part in tackling this public health emergency.”


So why has Barrow-in-Furness been overlooked by the Government ? Accident or design ?