Has Britain fully recognised the importance of the part played by Basil Brown at Sutton Hoo ?

Last week when I researched the role of Basil Brown the 1939 archaeological dig at Sutton Hoo, with a view to publishing my post (below) to coincide with the world world transmission of the Netflix movie, 'The Dig', I had no idea of the reception that my post would bring.

Is Britain a country which finally recognises its old and Uncrowned King of Sutton Hoo, the brilliant Basil Brown ?

By posting a link on twitter : 'For Basil Brown. the 'Uncrowned King' of Sutton Hoo, you might like : a small tribute : http://bit.ly/3aa6O8o', I have been overwhelmed with the response. Google Analytics tells me that to date, the post has received over 13,000 page views. At the same time, I have received replies and comments from tweeters as far afield as Singapore, Sweden, Italy, Spain, Dubai, Bayreuth, Toronto, Yukon, Costa Rica, Auckland, and in the USA from San Francisco, E. Tennessee, Pittsburg. Isolated by the Covid Pandemic, it has put me in touch with the world.

In terms of recognition, I'm particularly proud of the fact that the historian Tom Holland tweeted : 'A fine and moving tribute to Basil Brown, which anyone who has watched 'The Dig' will enjoy'. Also the great historian, Simon Schama replied : 'this is lovely thank you'.

In answer to the question : Has Basil been given the credit he deserved in the recovery of the Sutton Hoo Ship treasures ?  The end credits in the movie, 'The Dig', read :

The Sutton Hoo Treasure was taken from the British Museum to the Aldwych Underground Station in 1939, to protect from possible German aerial bombardment during the Second World War. In the War, the Museum was bombed on several occasions, but the Treasure remained safely stored 28 metres underground. It saw the light of day again, at the end of the War, before the end of 1945.

The Treasure was indeed displayed for the first time, 9 years after Edith's death at its first public appearance at the Festival of Britain in London in 1951. There were 8 million visits to the Museum and many people went more than once, so it safe to say that the treasures were seen by millions of visitors.

'Basil Brown's name was not mentioned' :

Apparently, this was true for the Festival and the Museum and when the Treasure went on permanent display in the late 1950s, Basil's name not mentioned on the information boards. Sue Brunning, Lead Curator for the Museum's Sutton Hoo Collection, has said : "I don't believe there was any great conspiracy to omit Basil's name. The emphasis in the 1950s was very much on the artefacts themselves, which were mind-blowing, but his name has definitely been on the boards since the permanent display was created in room 41, in 1985" and his name does appear 'alongside that of Edith in the British Museum's permanent display'. However, on the Edith Pretty page of the British Museum's website, a click on the name 'Basil Brown' brings up no information, but just half a dozen photos from the Sutton Hoo Dig.

'It is only in recent years that Basil's unique contribution to archaeology has been recognised' :

It probably true say that a recognition of Basil's 'unique contribution' in terms of his approach and techniques, has only been recognised in this century and therefore 'in recent years'. However, his 'contribution' to Sutton Hoo has been publicly accredited for the last 35 years, which is hardly 'recent' and 'privately' for much longer.

"In fact, the first full published account of the Sutton Hoo finds, written by Charles Phillips in 1940 in the 'Journal of Antiquity', included mention of Basil Brown, so he was being acknowledged within a year of the dig, even if you would have had to track it down to read it. That 1940 archive report has since been made available to read online."

It is probably true to say that Basil has gained more recognition at the local and Suffolk level than at national level. Simon Knott has said : 'To be fair, Basil Brown has been well known locally for his role. There's been a display about him in Ipswich Museum for many years and the new lecture hall at the Suffolk Archives Building, 'The Hold' in Ipswich, is named after him'. In addition, to this one road in a new build in Rickighall, 'Basil Brown Close', bears his name.

After Basil's death in 1977, his wife May, donated his personal records to  Ipswich Museum, but it wasn't until the 1990s, that the Suffolk Archaeology Department started to transcribe some of his notebooks. Then in 2014, 'The Basil Brown Collection', owned by the Museum, containing his diaries, notebooks and photograph albums, was deposited with the Suffolk Archives, with the agreement of Ipswich Borough Council which owns the Museum. 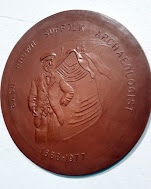 In 2009 the 'Suffolk Institute of Archaeology and History' held a special service in Basil's honour in St Mary's Church in the village Rickinghall, where he lived. They commissioned the creation of a plaque in his memory which will be unveiled was unveiled to mark the 70th anniversary since his unearthing of the ship. The plaque was handed over by its creator and Institute member, Gilbert Burroughs, who formed an interest in archaeology after meeting Basil in the 1950s, who said :
“He was a humble man, he was not pushy at all and whilst he was not a professional in the sense that he went to university and got degrees he was an excellent archaeologist and I think that really stands out by the fact that anyone who looks at the photographs of the Sutton Hoo boat can see it was not an amateur dig”. As well as honouring him with the plaque, the Institute hoped to find out what happened to Basil's ashes after he was cremated at Ipswich Crematorium in 1977 in the hope of being able to lay a wreath at the site.

Since composing my first post on Basil I came across this 'BBC Archive' film interview of Basil, which demonstrates that he was little like the Basil portrayed by Ralph Fiennes in 'The Dig'.