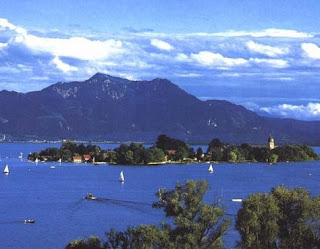 A crime took place in a holiday home on the lake above. It is called 'Chiemsee' and is in Bavaria not far from where I'm writing this post. It involved a 56 year old German-American financial advisor and 5 elderly Germans, 3 men and 2 women with ages ranging from 60 to 79. The story is bizarre and was reported in the 'Sun' newspaper in Britain and others around the world.

KIDNAP
James Amburn returned to his apartment in the town of Speyer after a night out in June. He was hit from behind with a zimmer frame, tied up with masking tape, as he said later : " I looked like a mummy. It took quite a long time because they ran out of breath". He was then taken to a lake called Chiemsee where his abductors, the 74 year old Roland and 60 year old Willy were met by Roland's 79 year old wife, Seiglinde. They were later joined by the retired doctors, Iris 66 and Gerhard 63.

MOTIVE
The kidnapped Amburn ran an investment company and on his advice the group had invested 2 million pounds in Florida property and lost it all in the financial storm.
The Chief Prosecutor of Traunstein said later : " They were angry because they invested money in Florida and lost it all."
Their motive was clear : THEY WANTED HIM TO COUGH UP THE MONEY THEY HAD LOST

ORDEAL
Amburn claimed he was kept chained up and almost naked in a cellar, was fed soup twice a day and periodically beaten up with a chair leg and burnt with cigarettes. He said they threatened to kill him and did sustain 2 broken ribs. Their motive was clear : they were using force, captivity and intimidation to get him to somehow 'cough up' the money.

ESCAPE
On the occasion of being allowed to smoke in the garden, ( perhaps the 2 doctors objected to him smoking in the house ?), he escaped over the garden wall only to be pursued by car with his captors shouting : "Stop that man ! He's a burglar !"
Two local men stepped in and pinned Aubam to the ground and he was taken back to the seller and he says, another beating.

RESCUE
Amburn wrote out a message to a Swiss bank asking them to transfer money, but here's the clever bit : when asking for insurance policies to be called up he put in call up 'pol-ice'. Someone in the bank picked it up. The house was surrounded by 40 police from the anti-terrorist squad and Aubam was freed and the assailants arrested.