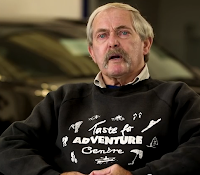 Brummie, who has died at the age of 70, was a remarkable man who led a remarkable life. In 2015 he said : "I've lost all my toes to frostbite. I've lost my kneecap, part of my femur, been shot, been blown up, broke my neck and avalanched off Everest about half a mile, four times been paralysed and I've got Parkinson's disease. They said I'd got "six months to two years to live" and that was thirteen years ago. So that ain't gonna happen."
https://www.youtube.com/watch?v=ZlXGwK09o2w&t=0m44s

He was born 1945, the last year of the Second World War, into a poor, working class family, in the mining village of Hamstead, straddling the border of South Staffordshire and Birmingham. His Dad was a factory worker and money was tight and a measure of Brummie's  unhappiness can be judged from the fact that he ran away from home for the first time when he was just nine years old. He

developed a thirst for climbing and later recalled : "As a kid I used to walk along the canal banks in Birmingham and we didn't have a lot of toys and things, but there were cliffs there and bridges and I started climbing on bridges" and, no doubt, he scaled this bridge over the Worcester and Birmingham Canal as it headed for the City centre.

By 1958, and despite his diminutive size, he had already become a delinquent and recalled  : "When I was 13, I had a gun and I would have used it. I was running gangs. I was in Soho in Birmingham, which is predominantly a black area, got mixed up with people there and I would have used this weapon. I would have been a great gang leader. I didn't. I left. The gun actually went to a friend of mine who ended up for murder and I'd had been the same way."

He was well on the way to becoming a professional criminal and had "taken drugs, done all sorts of things. Been robbing, stealing - all manner of things" when, at the age of 17, he left home and "went into the Military, three years in the Green Jackets, the Rifle Brigade, very respectful regiment." Apart from the soldiering he found that "they'd got climbing clubs" and "went to Germany, to Bavaria, saw places like these and started walking and wandering in the hills."

When he was 20 in 1965, he decided to join the SAS and deserted from the Green Jackets : "because they weren't putting my application through and I ended up at the gates of the old camp with my Green Jackets uniform where the first person I saw there was smaller than me, he was five foot five, half an inch shorter and he had the SAS Regiment beret on, he had wings on, no rank, nobody wore rank in those days and I looked at him an I thought : 'Well of he can get in, I can get in."

"He took me up the the sergeant major who was responsible for the selection and he was six foot, big brummie lad, hands like shovels and shook my hand. Well sergeant majors don't do that. He said  "I'll go and see the Boss" and 'the Boss' was the Major. Again, you never called majors 'bosses.'  It was always 'sir.' And he went in and all I could hear was : "Troublemaker, troublemaker. We don't want him" and I was listening at the

door and then he came out and I pulled myself back and he said : "Right, I've persuaded the Boss to give you a chance. Where's your regiment ?"  I said : "Green Jackets, Winchester," I gave the Adjutant's name and he rang them up and all I could here over the phone was : "We've got this young lad Stokes. He's run off, run away." "Put him in jail, put him in the jail." I could hear him going down the phone and he looked at me and he winked and he said : "I'll tell you what Sir, we'll keep him here. If he passes selection we'll deal with it. If he doesn't you can shoot him " and he put the phone down."

During the next 23 years, as part of the Special Air Services and serving as a sergeant, he was to take part in active duty, including the Falkland Islands as well as Malaya, Borneo and Oman where he was shot in the knee in Dhofar and along the way was also blown up. In addition, he taught 'mountain rescue' and 'mountain warfare'  to NATO troops and travelled to British Guiana, Jamaica, Chile and the Canadian Rockies. 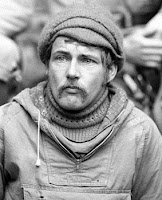 In 1975, at the age of 30, his friend, Michael 'Bronco' Lane convinced him to sign up for the 'Army Mountaineering Association' so that he could try for a place an upcoming 'Nuptse Climb' on Everest’s near neighbour, which would serve as a trial run for a an assault on Everest. He persuaded the Expedition Leader, on a shakedown trip to the Alps, to include him on the team and performed well on the Nuptse trip, which unfortunately saw men suffer from multiple injuries and four fatalities.

Along with Bronco, he was invited to join the Everest climb and i

n May 1976, they took part in the expedition planned as the first to put British soldiers on the roof of the world. Unfortunately, after reaching the summit, they encountered 'white out' conditions as they made their descent. As darkness fell, still situated at 27,000ft, they were some distance from their camp and were forced to bivouac in a snow hole on an exposed and dangerous knife-edge ridge. He later recalled : "We scraped a little hole in the snow. Bronco hit me to wake me. I did the same to him. We were keeping each other alive." They both knew their chances of surviving the night, in some of the worst conditions ever seen on 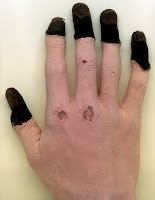 Everest, were slim and by morning they were both barely alive. Bronco had fed Brummie oxygen from his own bottle to keep them alive. Incredibly, exhausted and frost-bitten, they made it down the mountain but as a result of their injuries they both lost their toes and Bronco lost five digits of one hand. They waited for three months for their amputation operations, after which  they had to learn to walk, run and climb again with only half their feet.

The expedition leader successfully recommended them for the British Empire Medal and wrote :
'I consider the conditions under which they reached the summit of Everest to be the worst under which the mountain has ever been climbed. There are few mountaineers who could have survived such conditions.'

For Brummie it was a long road back to ‘normal’ life and eight years before he went back to climbing, when in 1984, at the age of 39, he climbed the North face of Everest, having proved himself by climbing Mount McKinley in Alaska. Tragically, an avalanche wiped out the advanced base camp, killing one of the members and injuring several others and Brummie himself suffered a broken neck as a result of being swept along by the avalanche. 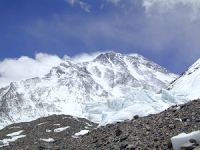 Undeterred by his injuries, on leaving the Army at the age of 40 in 1985, he obtained a permit from the Chinese Government to climb the north-east ridge of Everest, the only remaining unclimbed route. His team for this attempt was to be a joint ex-SAS and top British climbers with notables like Joe Brown, Paul Nunn, Mo Anthoine and Paul Moores. At 26,000ft, the team were forced to abandon their assault, owing to abnormally hazardous weather conditions, but obtained, what is probably the best film footage of Tibet and Everest, ever taken.

In 1988 Brummie completed the North-East ridge some years later, but suffered three attacks of cerebral oedema, which left him partially paralysed and had to retreat all the way back to London, two of his team, however, Harry Taylor and Russell Brice, managed to make the first ascent of the Pinnacles

In 1990 he published his autobiography : 'Soldiers and Sherpas’ A Taste For Adventure' and the following year, at the age of 46, with his wife Lynn, Brummie started the 'Taste for Adventure Centre' in Credenhill, Herefordshire, as an outdoor activity centre which aimed to 'empower less privileged young people and help them fulfil their potential through the medium of outdoor challenge.' using high ropes, climbing, canoeing, kayaking, abseiling, mountaineering, survival and expeditions to raise cash to Europe, Kenya and Nepal. https://www.youtube.com/watch?v=ZlXGwK09o2w&t=1m10s

Brummie said he told the youngsters about his own youth : "I'm not proud of it, but I've seen a little bit and many different angles in life and some of the people we work with are in those sort of fields and when they come here I tell stories about my background and suddenly they see this bloke, five foot five and a half and nothing, he can do all this : run away, join the SAS, get shot, get blown up, go climb Everest and I'm not recommending they all do that, but they sort of realise and then they ask questions and then you answer their questions from a point of strength, because you've been there."

Lynn and Brummie also focussed on the less able, the impoverished, the abused and the elderly, teaching them self-reliance, team trust, team dependence and basic survival skills and in 2004 he was awarded an MBE 'in recognition of his charitable work' and in the 25 years since its inception many thousands of people, young and old have passed through his hands. http://tasteforadventure.co.uk/history/

"You can become whatever you wish. You can become your wildest dream. All you've got to do is to have that idea in your mind and that will do it."