Britain is no longer a country for and says "Farewell" to the protector of its sick and injured wildlife, Les Stocker 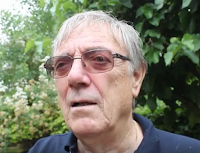 Leslie, who has died at the age of 73 and created one of the most revered animal hospitals in the world, was born in Oxfordshire in the fourth year of the Second World War in January 1943, probably as a result of his mother being evacuated for her confinement away from Blitz-torn London. 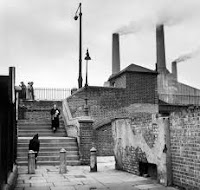 Les had always loved animals and his passion probably started when he was a kid growing up and playing out on the grassless streets of post-war Battersea in the heart of bombed-out London. As he later recalled : "There were no animals where we lived, apart from caterpillars. Me and my mate Peter used to go take the bus to Wimbledon Common on a Saturday morning and go looking for birds’ nests and lizards and things like that.”

When he started to attend the prestigious Emanuel Grammar School, having passed the 11+ exam in 1954, perhaps he was fired by the science lessons of Mr H.H. Hirst. It is difficult to say. What is certain is that the school, which had been independent since its Elizabethan foundation and became a voluntary- aided grammar in 1944, was proud of its traditions and its pupils tried to live up to its motto : 'Pour Bien Desirer', 'The Noble Aim'. Although Les didn't know it at the time he, would eventually join the school's list of illustrious alumni which included the tv presenter Michael Aspel and the creator of the world wide web, Tim Berners-Lee and no doubt, the spirit of the school which inspired achievement, later inspired him in his work in wild animal rehabilitation which was indeed a 'noble aim.'

In his teens in the late 1950s, he began to read books by wildlife experts such as Gerald Durrell : “My favourite was by an author called Grey Owl. He was a guy from Reigate called Archie who became an American Indian and wrote all these books about hunting and trapping.”

After leaving school at 16 in 1959, Les trained as an accountant, but his interest was always the animals, as his wife recalled : "When we were courting, Les would say, 'Let's go to the park and look at the birds!' "

The years passed and when he was in his mid thirties he stumbled across an injured hedgehog and took it to the local vet to see what treatment could be applied. “I can’t do anything,” the vet said. “I suggest I put it to sleep for you” to which Les replied : “I don’t think that’s necessary.” When Les found his local branch of a major animal welfare organization, reacted in the same way, he took the hedgehog home and cared for it himself. This was in the summer of 1976 and as he recalled : "There was a massive drought and all the media were coming on television and saying : "There's a load of hedgehogs seem to be out and about dying." So I thought 'I've got to do something about this. '"

As an accountant, Les quickly saw the cause of the problem : the veterinary profession, fully occupied coping with domestic animals and with little training or experience with wild animals, had insufficient time or resources for wild casualties. As he later said : "If you bring your pet dog in for treatment by a vet, you take it away afterwards to get better at home. But no one comes to take away a wild animal to give it time to get better.”
https://www.youtube.com/watch?v=l7DD2DFbG0k&t=4m53s 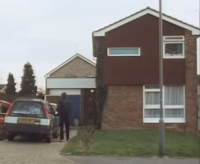 Identifying an obvious gap in the care provided to sick or injured wild animals, in 1978, at the age of 34, Les and his wife Sue set up an animal rescue centre in a small shed in the back garden of their estate, suburban house in Aylesbury, Buckinghamshire. When he thought about an injured animal he reflected on "how alone it was, it had nobody to look after it, nobody seemed to care. It was just  that feeling that made it quite easy for me to start taking them in. I didn't mind what time of day or night when they came in I still found the time to look after them."
https://www.youtube.com/watch?v=l7DD2DFbG0k&t=0m33s

He recalled : “It was a hobby. I said to the local vets, the police and the RSPCA, "If you get any wildlife casualties, let me have them."” 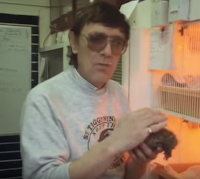 As the reputation of Les and Sue spread, members of the public who had found ill or injured wild animals began beating a path to their door, including Robin Gibb of the Bee Gees, who pulled up in his Rolls-Royce and dropped off a partridge which had been hit by a car. They were soon coping with a range of animals and, working with a sympathetic local vet and without formal training began to develop treatment regimes for wild animals, through a process of trial and error.

In, at the age of 40 in 1983 Les retired from accountancy and turned his hobby into a fully-fledged charity, 'The Wildlife Hospital Trust' and called it 'St Tiggywinkles' after Beatrix Potter's Edwardian children's book, hedgehog character and saw it opened, amid much fanfare, by the actress Susan Hampshire in August 1985.
So many hedgehogs passed through Les' hands that he was reputed to be the world's expert on hedgehog care. His publications were his sole form of income because, as a trustee, he could take no money from his charity. To help run the Trust he employed five full-timers and an army of volunteers helping with the animals and in the office dealing with donations from the public, cheques to buy St Tiggywinkle's merchandise, money raised from fetes, schools and sponsored games, requests to adopt animals. Les' aim was to build a teaching hospital on a permanent site which would cost over a million pounds and in 1991 it was opened in the Buckinghamshire village of Haddenham by Princess Alexandra, the Charity’s patron.

Extensions were subsequently added to the hospital giving it a triage section, state-of-the-art operating theatre, x-ray unit, diagnostic lab, nurseries for juvenile birds and mammals, convalescent wards, an intensive care unit for swans, pools for otters, seals and waterbirds and a bat cave, equipped with ultra violet light to attract insects for its resident bats. In addition, it provided a 24-hour emergency service because, as Les explained : “most of the calls come in after 11 pm as people drive home from the pub”.

What was once a part-time operation in Les' suburban house had become a professional operation with 23 full-time staff, 50 volunteers and between 8,000 and 10,000 trauma patients a year and with its reputation as a teaching hospital and emergency phone calls from overseas Les saw his hospital has become a world hub of care for wildlife. https://www.youtube.com/watch?v=rXLEwS7wPmk&t=2m58s

Les' hospital adapted many 'human' hospital treatments for injured or sick wild animals, including keyhole surgery, fibre optics, ultrasound scanning, artificial limbs and spare-part surgery. While trained vets were paid to come in and do operations and prescribe drugs, Les himself learnt how to anaesthetise a range of animals and provide emergency treatment.

His ingenuity knew no bounds and he developed :

* the use of surgical superglue to repair bats’ wings and broken beaks.

* a stretcher with holes cut for the legs of injured deer with straps on top to secure it making it easier to handle their flailing legs and sharp hooves.

* an anaesthetic mask for baby hedgehogs out of a plastic syringe cap.

* incubators for injured animals out of plastic plant propagators bought from a local do-it-yourself store.

Two examples stand as a measure of his dedication : In 1997 the hospital treated four sick seal orphans that had been rescued from the Norfolk coast and when it came to releasing them, Les travelled to Norfolk, hired a boat and went out to sea in a force eight gale to return them to their colony and when surgeons at the hospital stitched up the tongue of a toad after it had been severed by a lawnmower, he found the toad was no longer able to flick it to catch insects and subsequently spent hours training the animal to pick up food with its mouth.

As a mark of recognition for the work of his Trust, St Tiggywinkles developed extensive cooperation with universities, with 20 students at any one time studying and working on a 12-month government-accredited course in animal welfare. The hospital has the world’s biggest and widest selection of wildlife in-patients. 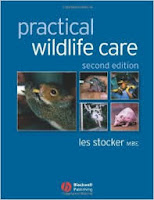 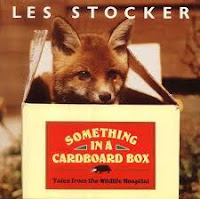 Les himself  wrote a number of books based on the work of the hospital, including 'Something in a Cardboard Box : Tales from a Wild Life Hospital' in 1989 and a veterinary manual, 'Practical Wildlife Care' in 2000, which gave disparate advice on everything from how to treat a bird with a fractured wing, a dormouse with an abscess, or a grass snake suffering from dehydration.

Recognition also came in accolades : In 1990 he received a 'Rolex Award for Enterprise' which played a key role in bringing him international renown and support and the following year was appointed MBE for 'Services to Wildlife' and in 2002, at the age of 59 and his proudest achievement, he was made an 'Honorary Associate of the Royal College of Veterinary Surgeons.'  The citation for his associateship stated that he had 'probably done more to improve the quality of veterinary care for wildlife species than anyone else in the country', and pointed out that he had presented papers and speeches on the need for wildlife care to the European Parliament, the British Veterinary Zoological Society, the British Veterinary Nursing Association and the National Wildlife Rehabilitators Association. 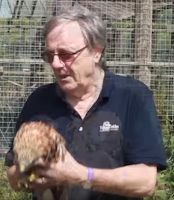 Les once said :
“If you’ve got a passion for something, you learn about it. An animal will fight for life, if you give it a chance. It’s the same as with a human casualty. And when you see the bird or animal go off into the wild when it’s better, you feel as if you’ve really achieved something.”