Britain, no longer no country for old men in the kitchen

The supermarket chain, Waitrose, which runs Cookery Schools all over Britain, reports that retired men are among the fastest-growing of its student groups and is planning to trial courses aimed specifically at older men. Claire Lanza, Head Chef at the company’s cookery school in Salisbury said : “We find skills and meat-based courses are very popular with men in general and with retired men in particular.” There's plenty potential for profit here from an industry estimated by the 'Independent Cookery Schools Association' to be worth £70m to £80m a year.

If you take a tour around Britain you'll find old men ready at their chopping boards in :

* Harts Barn Cookery School in the Forest of Dean in Gloucestershire, where demand from retired men has quadrupled since the spring of last year and where six men in their sixties among the 10 people learning how to cook a curry from scratch. Yvette Farrell, an instructor said : “We are seeing a cooking revolution among older men. In one of my classes I teach students how to cook a three-course meal and nine out of 10 of the attendees are retired men.” Apparently, she had to teach one 67-year-old man how to peel a potato because he had never done it before. However, many of the students are there because they have some cookery skills and are interested in how they can cook in a healthier way. “They’re concerned about their heart and diabetes and will ask questions about sugar, salt and butter, and the hidden factors in processed food. Others have the time in retirement to explore new skills. Cooking for them is exciting and almost magical. Their generation missed out because they never experienced being in the kitchen with their mother when they were young.”

* Bakewell, Derbyshire at Hartingtons School of Food , where 60% of callers are buying bread-making courses as Christmas presents for the older men with a 10% to 20% increase in bread-making courses being bought for them this year. Director, Chris Horne said : “A typical comment from these men would be that they remember their mother baking bread at home. It can be a way of connecting with their childhood memories. Some can get quite competitive, and the quality of their loaf is like a ‘badge of honour’.” 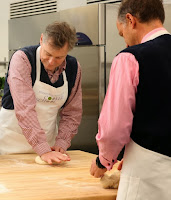 * Edinburgh at the New Town Cookery School, where Fiona Burrell estimated the number of male students aged over 60 attending beginners’ classes had doubled over the past year. With typically, half of them either widowed or divorced and where Fiona said :  “A lot of them feel quite nervous because they have never cooked a meal in their lives and some cannot do anything at all – you almost have to tell them what a wooden spoon is.”

* Walton-on-Trent, Derbyshire where at the Seasoned Cookery School the new 'How to cook the perfect steak' course is proving “extremely popular” with older men.

* in Northwood, Middlesex in Denise’s Kitchen, where Denise Phillips, professional chef and founder of her Jewish cookery school said : “There’s no longer any stigma attached to men cooking. It’s much more socially acceptable, but despite this many older men lack confidence in the kitchen.” Here, 66 year old Ian Kay, 66, attended two basic cookery classes after his divorce and said : “My mother and I saw cooking as a girly thing when I was a child in the 1950s, and I regret that now. I wish I’d done a class when I was younger. It’s given me the confidence to be adventurous and introduce spices. I make meals that are less bland nowadays – and cooking is another string to my bow.”

Professor Anne Murcotta, Food Sociologist at the School of Oriental and African Studies, University of London believes many of these older men are likely to have been influenced by the rise in popularity of cookery shows on tv such as 'The Great British Bake Off' and suggested that : “There is a place for men in the kitchen that has become very visible in a way that it wasn’t 30 years ago.”

Sixty-six year old Norman Calder, retired naval officer from Portnockie in Scotland, acted as a role model for older men when he won the hearts of television viewers across Britain in the 2014 'Bake Off' with his unfussy approach on the BBC show. 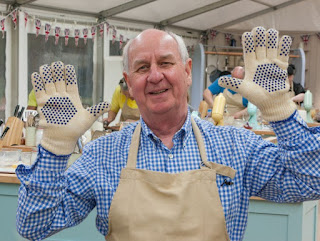 Labels: Old men in the kitchen