Bob, who has died at the age of ninety and brightened our tv screens in the 1970s and 80s with his bewhiskered, country-gentlemanly presence and infectious enthusiasm on 'Model World' and 'Tomorrow's World', was in fact the son of an Austrian aristocrat, who had spent his youth on the family country estates of Schutzmanndorff' and its palatial Viennese residence in pre-Second World War Vienna.

What you possibly didn't know about Bob, that he :

* was born Robert Alexander Schutzmann, in 1924 in Vienna, the son of his writer mother and Austrian lawyer father and ardent Zionist, Herbert, Baron Schutzmann von Schutzmanndorff, educated at the Real Gymnasium and recalled : "I've been lucky enough to bump into models all of my life right back to my earliest days in Austria. We occupied a section of what was once the family palace on the Vienna Ring on the Great Boulevard of Vienna. A tram went past our house on its way to the spa suburb of Baden. You could get a meal on board complete with white table cloth and fine china and even at the early age of three, I like it so much that my Grandfather gave me a model of the tram." 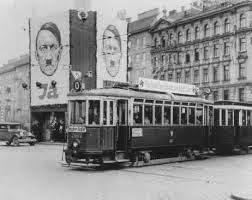 * developed his interest in railways on the family estate, set in forest outside Vienna and helped to maintain the private line which hauled timber around it and  'grew up in a family which had its bedding from its own land and I well remember the goose down duvet which I had as a child – very warm but heavy'

* was thirteen years old when his Father died in 1937 and when Hitler engineered the Nazi takeover of Austria the following year http://ow.ly/HKzNr, facing persecution escaped to Palestine with his mother and sister by way of Trieste and after the outbreak of the Second World War in 1939, desperate to fight the Nazis, contacted a former British diplomat based in Vienna who helped him gain a commission in the Royal Navy in 1942.

* served as a lieutenant, without a naval beard, in torpedo boats out of Alexandria and took part in the naval landings which led to the liberation of Crete and less seriously recalled that, on board, out of the chalk sticks used to record the ship's course on a blackboard "one of our ratings used the chalk to make tiny chalk models (of ships) out of them. The trouble was these models never survived because the chalk was used again and the model was literally written off."

* demobbed after the War, visited the BBC to find 'Monica Chapman' who had produced the music request programme, 'Forces Prom', wanting to thank her personally for the choices he had submitted and married her after a six week courtship at the age of twenty-three in 1947, then took British nationality adopting one of her family names, 'Symes'.

* after several years in the Merchant Navy, utilised his knowledge of German, French and Arabic when he joined the BBC's Overseas Service in 1953 and saw Monica's career prosper, who by 1956 was a producer working with Roy Plumley on BBC Radio's 'Desert Island Discs' and was photographed with him and island castaway, Dame Margot Fonteyn in 1965.

* at the age of thirty-two in 1956, had his London-based work interrupted by a two year stint as a 'Broadcasting Officer' in the Eastern Region Colonial Office in Nigeria, to install radio transmitters in Lagos and Enugu, before resuming his career with the BBC where he also became a radio producer of 'Desert Island Discs' before moving to television in his forties in the 1970s and later reflected : "When I went into television I started again as an assistant. It was called a 'production assistant'. Then it was an 'assistant producer'. You did research. You rang up and fixed filming sessions. You filmed it. You wrote the script and you edited it and submitted it to the programme editor who put it in a programme like 'Tomorrow's World' and an awful of times I'm not in it, but did the work."

* in 1967, with the advent of colour tv, took advantage of an empty black and white transmission studio, to make a model railway layout and filmed the models in action to the tune of 'Wheels' and in 2012 recalled : "The controller of BBC2 came in and saw this film being made and said : "What is this ?" And I said "It's a railway" and he said : "When that's finished Boyo, let me have a look at it" and I did and he said "We'll use it as a filler film." And that gave me my bona fide, as it were : 'A', I could make films and 'B', I loved railways. And from then on, Rake's progress has been glorious." http://ow.ly/HKrw6 (half-way through clip).

* at the age of fifty, in the February and October 1974 Parliamentary elections, stood unsuccessfully as a Liberal candidate for Mid Sussex with 30% of the vote and in the 1970s was also involved with the unsuccessful 'Waverley Route Preservation Project - the Border Union Railway', focussed on reopening, for enthusiasts and the public, the abandoned railway track which ran south from Edinburgh through Midlothian and the Scottish Borders to Carlisle and worked on the possibility of acquiring locomotives for the line. 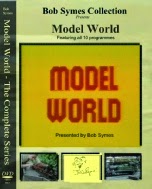 * had more success when he started to present the 10 programme series, 'Model World' for BBC TV in 1975, dealing in turn with : how to build planes from balsa wood with radio controls explained and demonstrated ; yachts and power boats; model soldiers to model battlefields and finally three episodes devoted to his beloved railways, through initial plans of building the track, stock and scenery and on to running trains with movements shown on the 00 Gauge model of Horsted Keynes and then on Gauge One with live steam, battery-powered and diesel-electric locomotives : http://ow.ly/HKJ14

* in 1982 presented a 'Tuesday Documentary' for the BBC, 'The Danube Power Game' and returned to the river whose banks he had stood on as a boy in Vienna, fifty years before, to uncover the plan to tame its flow from Germany to Russia, which had the potential to make it the centre of a new power struggle which could threaten the security of  Western Europe : http://ow.ly/HKNjD

* in 1984 presented 'Ad Hoc Adventures' on BBC Radio 4 on which he, as a 'steam enthusiast and amateur cook, deserts his kitchen and sallies forth in search of leisure occupations suitable for a gentleman of increasing age and girth' and broadcast from the series : 'The Call of the Wild' and 'Mountains are easier to scale if a trek pony does the leg work.'

* became a familiar face to tv audiences of the 1980s through his appearance on 'Tomorrow's World' http://ow.ly/HIMNe  in which he showcased smaller inventions in dramatised vignettes such 'Bob Goes Golfing' and sometimes presented challenges for the film director when a close-up was required of his hands, which had parts of some fingers missing, as a result of accidents with his own invention-related exploits in the workshop.

* at the age of sixty-two, made six programmes of 'Model Magic' for Ulster TV and Channel 4 in 1986 : http://ow.ly/HKJNO and co-presented with Mary-Jean Hasler, the series, 'Making Tracks' in the 1993 -95, for the BBC dedicated to little-known lines and networks worldwide which specialised in steam operations with episodes filled with train sounds rather than background music : http://ow.ly/HKUgc 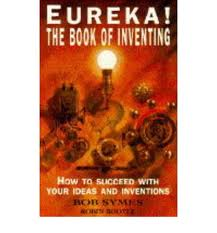 * himself the inventor of toilet ventilator, was also instrumental in setting up and chairing the 'Institute of Patentees and Inventors' for inventors and patent attorneys to provide advice on issues relating to invention and innovation, ranging from 'intellectual property rights' and 'originality searching' to 'manufacturing and pricing practices', 'presentation techniques' and 'funding.'

* in 1992 launched 'National Invent-A-Thing Week', said the image of the 'mad professor' had to be discouraged and in 1994, wrote and published jointly with Robin Bootle 'EUREKA ! Book of Inventing'.

* at the age of seventy-three in 1999, narrated, with love and unabated enthusiasm, 'Model Building International' based on 'The Pendon Museum' http://ow.ly/HHAE8 in Long Wittenham, Oxfordshire and considered by him to contain the best scale model railway in the world, centred on the Great Western Railway of the 1920s and a typical village in the Vale of White Horse.

* in 2012 took the trouble to write, with characteristic charm and good manners to the Manufacturers of a baavet or 'matress topper' he had bought :

'Dear Lesley and Roger,
As a broadcaster on Tomorrows World for many years I came across many unusual inventions and I am sure that yours would have merited viewing. I grew up in a family which had its bedding from its own land and I well remember the goose down plumau which I had as a child – very warm but heavy. Therefore I was delighted to receive your Baavet which is equally warm but so much lighter. Having reached the grand old age of 86 I am very conscious of the cold. Since receiving the Baavet it is the first time that I have slipped into bed and not felt chilly for more than a minute and then neither too hot nor too cold all through the night. The Baavet also solves a well know marital problem – ‘the cold spot between husband and wife’! The Baavet also works very well as a mattress topper – so soft and comfortable to lie on. One might have expected a degree of country smell from this natural product  – i.e. sheep wool – but there was no trace of farmyard. My congratulations on your product and also on the presentation -the small bag of lavender tucked into the Baavet was delightful. I must say that as myself, Bob Symes, I would recommend anyone to change over to this so aptly named Baavet.
PS. Archie the cat loves it too !'

* in 2012, at the age of eighty-eight, was still running his 'Dene Green Railway', set in the grounds of his beautiful house, nestled in a Surrey forest, with rides on open days on three locos on his 10 1/4 inch gauge running for about 1/4 of a mile in a U shape from the 'Top Sheds' to the 'Lower Station', with funds donated to 'Children in Need' and the facility of a smaller gauge layout where visitors could bring their own trains and enjoy shunting up and down the tracks all day long : http://ow.ly/HIMnc This photo of Bob : courtesy of Gullwing Photography.http://gullwingphotography.blogspot.co.uk/2012/10/bob-symes-steamdays.html

* in 2012 undertook a house move from Surrey to Mid Wales, completed in 6 days, with 6 men and a convoy of 6 trucks and with his wife, set about plans to rebuild his garden railway ,with a view to opening, once again, to the public and on his ninetieth birthday in May 2014, drove his newest loco and prize possession, the Great Western, Lady Melrose'.

* in Surrey, until its closure in 2014, was patron of 'Hospital Radio Lion' based at the Royal Surrey County Hospital in Guildford and served as President of the Guildford-based model railway circle, 'Astolat MRC' and once extolled the virtues of model making when he said : "We always wanted to be bosses in our own lives, where we give orders and what better than a model railway ? You switch it on and it comes. You switch it off and it stops. It goes where we put the tracks. In fact, we are total masters and sometimes this hobby takes hold of you like me and you can even use it in your job."

* would have appreciated 'Flanders and Swann' singing 'The Slow Train' being offered to him as a mark of farewell and affection  : http://ow.ly/HL2mb

No more will I go to Blandford Forum and Mortehoe
On the slow train from Midsomer Norton and Mumby Road.
No churns, no porter, no cat on a seat
At Chorlton-cum-Hardy or Chester-le-Street.
We won't be meeting again
On the Slow Train.

I'll travel no more from Littleton Badsey to Openshaw.
At Long Stanton I'll stand well clear of the doors no more.
No whitewashed pebbles, no Up and no Down
From Formby Four Crosses to Dunstable Town.
I won't be going again
On the Slow Train. 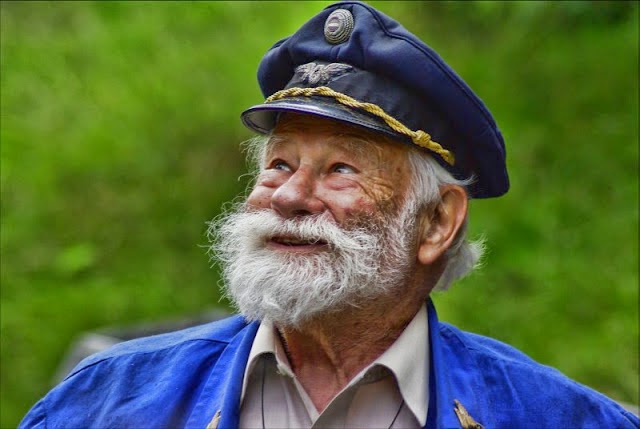 * was perfectly captured in this wonderful photo :   courtesy of Gullwing Photography
http://gullwingphotography.blogspot.co.uk/2012/10/bob-symes-steamdays.html