Britain is a country where, apparently, in fairness to the young, a few rich old Lords recommend the denial of financial benefits to the many poor old commoners

In Britain today there are still almost 2,000,000 poor old men and women, mostly subsisting on a state pension, which is the lowest of any developed country, as their sole income and are living in defined 'poverty.' Many of the old people in this group, who have worked all their lives, live out their bleak and often lonely days with little cheer. Their television set may be their only company and source of information about the outside world.

Also in Britain today, there are 781, mostly old, but all, most certainly wealthy, men and women in the House of Lords, mostly subsisting on generous, private and occupational pensions and their income from investments and property.

Eleven members of this group, sit on the Select Committee on 'Intergenerational Fairness and Provision' which has an average age of 67 and is chaired by Lord True, who sits with the Lords : Chandos, Bichard, Hollick and Holmes of Richmond alongside Baronesses : Blackstone, Crawley, Thornhill, Jenkin of Kennington and Tyler of Enfield.

The 72 year old Baron Bichard came in for criticism back in 2012 when he suggested that retired people should contribute to society by doing community work in order to help the state or lose their pension. At the time, Robert Oxley of the Tax Payers Alliance said : "it's a bit rich from a civil servant who was able to retire early to lecture us on working during retirement".

The good Lords and Ladies have just delivered a Report entitled 'Tackling Intergenerational Unfairness' in which they suggest that the state sponsored financial benefits and services currently currently paid to old people should be stopped and the money saved money be reassigned to young people instead.

In their Report the Lords warned that it was time to rebalance Government policy in favour of the young, in order to remove the risk of the social bonds between generations fraying further. It argued that because many pensioner households across the country have become better off on average than many working-age families, it was time for the Government to curtail several benefits given to all old people. These were an end to :

* the Triple Lock, which raises state pension payments in line with the highest of consumer price inflation, average earnings growth, or 2.5%

* to free TV licences for the over 75s

Lord True, said: “We are calling for some of the outdated benefits based purely on age to be removed. Policies such as the state pension triple lock and free TV licences for over-75s were justified when pensioner households were at the bottom of the income scale, but that is no longer the case.”

In response, Caroline Abrahams, Charity Director at 'Age UK' said :  “Young people may well need more help but we disagree that this should be at the expense of the older generation. This underplays the extent of need among older people and skates over the great difficulty of ensuring a targeted approach  which actually reaches those older people who are the most vulnerable. All the evidence suggests that means-testing, for example, results in significant numbers of very poor older people missing out. More profoundly we reject the notion that helping younger and older people is an ‘either/or’; in practice many at both ends of the age spectrum need our society’s support and an advanced twenty first century economy like the UK is well placed to provide it.”

Anna Dixon, Chief Executive, 'Centre for Ageing Better' said that with levels of pensioner poverty on the rise for the first time since 2010,  the ‘triple lock’ on the State Pension provides “a vital safety net” for people at risk of poverty in later life. “Nor should we be complacent about changes to benefits, given the level of inequality amongst people in later life. This includes access to affordable transport, which is critical to many people’s ability to get out and about and access essential services. But none of this is as potentially catastrophic as failing to build decent, accessible homes that meet the needs and aspirations of our ageing population, or making our workplaces fit for our longer working lives.”

In addition to support from Caroline and Anna, poor old pensioners also have a A Department for Transport spokeswoman on their side who said : "We know that buses are a vital way for older and disabled people to maintain their independence, which is why we renewed our commitment to continue the free bus pass scheme last year. There are no plans to amend this legislation and we are committed to ensuring that free local bus travel continues for these groups.”

Less certain is the future of the free tv licence, witness that a Department for Culture Media and Sport spokesman said : "Following the BBC Charter Review, the Government has committed to maintain the current licence fee funding model for the BBC until 2027. The BBC will take on responsibility for free licences for the over 75s from 2020 and it is right that they have consulted the public before making any decisions. We’ve been clear that we would want and expect them to continue with this important concession."

More than 90,000 people have signed Age UK’s 'Switched Off ' e-petition calling for the licences to be preserved and actor Ricky Tomlinson and former Labour Prime Minister, Gordon Brown, have supported the fight.

Ricky, who is 79, said of pensioners :  “A shocking three in ten of this age group live in poverty or just above the poverty line, and it’s these people who will find it almost impossible to pay for a TV licence. They’ll have to find at least an extra £154.50 a year when they’re already struggling to pay for the essentials like heating and food. TV means the world to many older people, especially those who are disabled or can’t get out and about like they used to. It’s the only form of companionship for many who are lonely. Much more needs to be done to protect vulnerable older people."

Caroline Abrahams said: “We’re glad the Committee agrees with us that the Government should take back responsibility for funding the free TV Licence for over-75s from the BBC, but dismayed that they also recommend the entitlement should effectively end by means-testing it. The evidence is crystal clear that under means-testing a substantial proportion of the poorest and most vulnerable pensioners would miss out and it’s really disappointing that the Committee was either unaware of this or chose not to take it into account.”

Independent Age’s Director of Policy, George McNamara, said : “subsidies such as free TV licences” were  “not luxuries, but lifelines, for many older people."

Asked by MPs in September to guarantee licences will remain free, BBC Director-General and another Lord, Lord Hall said : “I can’t give you a guarantee it will continue. The concession, as formulated, comes to an end in June 2020. We have got to decide what will replace it.”


Britain in 2019 : a country with the world's 5th largest economy and one which cannot guarantee to waver the payment of an annual £154.50 licence fee to its poorest pensioners. 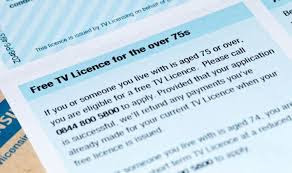