Judge Richard Tracey who died last month at the age of 71, served as Chair of the 'Royal Commission into Aged Care Quality and Safety.' 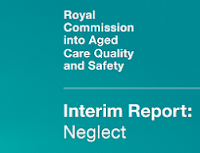 He passed away before he saw the publication of 'An Interim Report by the Royal Commission into Aged Care Quality and Safety' but the Report has his indelible fingerprints all over it.

Fellow Commissioner, Tony Pagone QC said : "Few people ever have the privilege to be a Royal Commissioner but Richard was made for it. He was experienced. He was wise. He was admired. He knew the law like the back of his hand. He was prepared to take a punt if it meant getting a better outcome for older" citizens.

Entitled 'Neglect,' Richard's Report is a shocking indictment of the treatment of old men and women in the country. It describes : the failures to meet the needs of old people in a system that ignores the concerns of those receiving care, is rife with substandard care and relies on an overstrained workforce that is undervalued and often unskilled to provide safe and humane care. The Commissioners described 'a shocking tale of neglect' in an ageist society where many old men and women struggle to navigate a complex care-entry process into a depersonalised system that can enable cruelty and abuse.

The Commission uncovered a story of untreated wounds, poor continence management, malnutrition, assaults, medical sedation without clear consent and fragmented palliative care for those who are dying in a harmful system that is awash with gaps in services and clinical knowledge.

Its first chapter is entitled 'A Shocking Tale of Neglect' and begins with : 'It’s not easy growing old. We avoid thinking and talking about it. As we age, we progressively shift our focus from work to the other things that give us purpose and joy : our children and grandchildren, our friends, our holidays, our homes and gardens, our local communities, our efforts as volunteers, our passions and hobbies'.
It says the community 'generally accepts that older people have earned the chance to enjoy their later years, after many decades of contribution and hard work. Yet the language of public discourse is not respectful towards older people. Rather, it is about burden, encumbrance, obligation and whether taxpayers can afford to pay for the dependence of older people.'

It goes on to say :
'We have found that the aged care system fails to meet the needs of our older, often very vulnerable, citizens. It does not deliver uniformly safe and quality care for older people. It is unkind and uncaring towards them. In too many instances, it simply neglects them.'

It observes that the nation  'has drifted into an ageist mindset that undervalues older people and limits their possibilities. Sadly, this failure to properly value and engage with older people as equal partners in our future has extended to our apparent indifference towards aged care services. Left out of sight and out of mind, these important services are floundering. They are fragmented, unsupported and underfunded. With some admirable exceptions, they are poorly managed. All too often, they are unsafe and seemingly uncaring. This must change.'

It says that the country 'prides itself on being a clever, innovative and caring country. Why, then, has the Royal Commission found these qualities so signally lacking in our aged care system? We have uncovered an aged care system that is characterised by an absence of innovation and by rigid conformity. The system lacks transparency in communication, reporting and accountability. It is not built around the people it is supposed to help and support, but around funding mechanisms, processes and procedures. This, too, must change.'

Now here's the thing :
The Report was produced by a Royal Commission in Australia and Judge Tracey was an Australian Judge who served in the Federal Court of Australia from 2006 until 2018. He concluded :

'The hallmark of a civilised society is how it treats its most vulnerable people, and our elderly are often amongst our most physically, emotionally and financially vulnerable. Frail and elderly members of our community deserve to, and should, be looked after in the best possible way, and we intend to do our best to see that it happens.'
— The Hon Richard Tracey AM RFD QC, Chair