Is Britain still a country for an old Polish warrior from the Second World War called Captain Zbigniew Mieczkowski ?

The focus on BBC's 'Newsnight' programme on Friday was
the latest proposals by Prime Minister, David Cameron, to control the number of European immigrants coming to Britain by stopping all Government sponsored 'in work' benefits until four years after the start of their stay in Britain. In particular, the programme focused on the impact these changes, if implemented, might have on Poles coming to Britain given the fact that at 600,000, they are the largest group who have settled in Britain since 2004. After talking to young Polish workers about this, Kirsty Wark interviewed 92 year old Zbigniew Mieczkowski who has fought for and lived in Britain for the last 74 years and although he is clearly still fiercely and proudly Polish, deserves the status of an 'Honorary Briton'. http://www.bbc.co.uk/iplayer/episode/b04t65tq/newsnight-28112014

"I'm joined by Captain Zbigniew Mieczkowski who was evacuated to Britain after the collapse of France. He then served as a troop commander in the Polish First Armoured Division in the Allied Invasion of 1944. He was decorated by France and Poland and Britain for his services and now lives in Henley where he's lived in Britain since the end of the War."

What this didn't tell us about Zbigniew was that he :

* was born in 1922 into an aristocratic family on Estate Dzierzanowo, Plock County and educated in gymnasia in Warsaw and Wloclawek and at the age of 17, on the outbreak of war with Germany in September 1939, was sent  by his father to Warsaw with his pregnant sister, as the driver of the family car, an American Hudson. 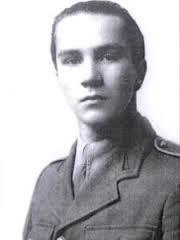 * with the car requisitioned by Air Force officers, was ordered to drive east to reserve airfields to 'welcome' the Allied war planes in an intervention which did not materialise and with the invasion of the Red Army, from the East, travelled to the Romanian border and then answered General Sikorski's call to 'join the Polish Free Army in France'.

* explained his trouble-free passage from Yugloslavia, through Italy to France by the fact that he had "such a young and innocent face that nobody could suspect me of wanting to harm Germany" and having joined the Army, spent his first winter in exile sleeping in barns and stables and began training in armoury near Orange, before the Fall of France to Germany in May 1940 saw him evacuated with the Army to Scotland via Liverpool.

* later said about his arrival in Britain that : "The British treated us very differently from the French. They were calm, self-possessed and cheerful. Ladies treated us with sandwiches and cups of tea. The manner in which they cared for us was a delight and contrasted with the messy, petrified French. The Scots were even friendlier." 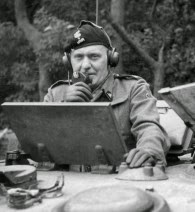 * continued his cadet training in armoury and graduated from the High School J.Slovak in Glasgow and in 1942 joined the newly formed First Armoured Division, equipped with state-of-the art Churchill and M4 Sherman tanks and remembered first meeting General Maczek (left) : "I was standing to attention and hoping to be noticed."

* while based with the Division in Berwickshire, combined training with defending the Scottish coastline between Montrose and the Firth of Forth, from possible German attack across the North Sea from Norway then in February 1944, knew that, with the signing of the Yalta Agreement between Churchill, Roosevelt and Stalin, where much of Eastern Poland was ceded to the Soviet Union and a pro-Russian government set up in Poland, he, with his fellow soldiers, could never return home without fear of imprisonment and death.

* crossed the Channel in June 1944 at the age of 22 with the First Armoured Division as part of the Allied D-Day Invasion and began the process of liberating towns in France, Belgium and the Netherlands with a minimum of damage and loss of civilian life which was appreciated by the crowds who cheered their Polish liberators until hoarse.

* after his first day in combat in August, in which he lost two friends, recalled that :"It was a terrible feeling to see that half the regiment had ceased to exist, we counted about eighty dead" and on being injured on the 9th  : "Suddenly a volley of mortar shells hit a universal carrier travelling near making it explode. I threw myself down, but shrapnel hit my leg", refused hospital treatment and soldiered on. 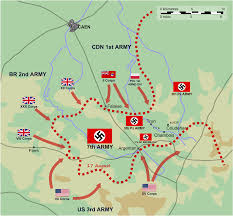 * went on to play his part in the brilliant victory against the German Army at Mont Ormel and the town of Chambois, followed by a series of offensive and defensive operations in the Battle of Falaise in which their 3,000 men confronted 14 Wehrmacht and SS divisions of 70,000 who were trapped.

* with his Division, played a crucial role in blocking their escape route and the surrender of 50,000 troops and later said :"Field Marshal Montgomery, when he visited us later in Holland, told us the Gap was like a bottle of Germans and we were the cork" and "It was a very difficult campaign because we were fighting very good German troops. They were magnificent soldiers." 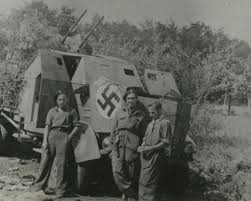 * at Breda, took part in an outflanking manoeuvre which freed the town after a hard fight, but without a single loss of civilian life and serving as a captain and troop commander (centre left), pushed on into Germany and enjoyed the Division's finest hour when its forces accepted the surrender of the German naval base of Wilhelmshaven, taking captive the entire garrison, together with 200 Navy vessels and continued to serve in Germany after the War until he was demobbed in 1947. 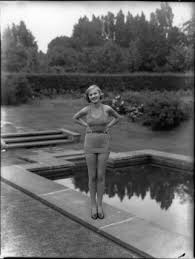 * returned to Britain at the age 25, having been invested with French Legion of Honour, the Belgian Order of Leopold, to start a new life as an immigrant along with his fellow combatants and General Maczek, who was stripped of his Polish citizenship on Stalin's orders, denied a war pension by the British Government and reduced to serving in a bar in Edinburgh and he himself, along with the other veterans was seen as a possible communist spy, was debarred from working in either a government-run organisation or business.

* starting initially as a manual worker, built a lucrative business career, married Caroline (right), the daughter of Lady Elizabeth and Victor, Second Baron Grenfell and lived in a country house near Oxford where he bred Polish Arabian horses.

* involved himself in Polish affairs as a member of the Polish Institute and Museum of General Sikorski, was instrumental in the creation of a monument to the First Armoured Division in Berwickshire in 1981, published 'Horizons - Reflections of a Polish Émigré ' dealing with his involvement in the political life of Polish diaspora.

Kirsty's first question to Zbigniew related to the proposed cut in benefits which would affect future immigrants from Poland :


Kirsty : "Captain, what do you think of David Cameron's proposal ?"

Zbigniew : "Well, I'm very disappointed by what the Prime Minister said because he's undoing the great effort of great English statesmen like Winston Churchill who, after the War, managed to consolidate Europe as one big nation. Although there were different nations, but there was one big organisation very connected together and I think, now, to dismantle this would be catastrophic to everybody, to Europeans, British and at the same time I am rather disappointed by linking us, I mean the Polish people, with the other nations coming to this country, because we played a very special role in the Second World War and the Second World War started in Poland with Mr Chamberlain promising Poland help which never arrived, of course with French, supposing attacking Germans on the other side, which never happened. Poland was left to die in 1939 and eventually it was partitioned with Russian help."

Zbigniew : "I feel that Mr Farage, is a pain in the neck in a way because he's creating a situation, for Prime Minister to gain votes and for this very reason says things which are very unpopular in this country, I don't feel will help him. I have a strong feeling that Poland should have a very special case. As I said, because we are not in the same league with the Romanians, Hungarians and other people who were fighting together with Germany during the Second World War. We helped you win the War."

Kirsty : "So you think there is a particularly special place for Poles and Czechs and. Slovaks and I wonder then, if you think that, in his heart, David Cameron actually believes in what he is saying or whether he feels pressured into it ?"

Zbigniew : "Well that is a difficult question of course. Politicians have language .... they say different to what they mean. I think it should be regarded a certain priority for Poles who helped to win the War, pilots who had managed to in the Battle of Britain. For the enigma, which was discovered by Polish scientists who had finished the War quite quicker than expected. We should be recognised in a different way."