John, acknowledged as one of Wales' most influential landscape artists with a  worldwide following, has died at the age of 83.

* was born in Kensington, London in 1931, son of Heather and Arthur, a then 43 year old architect, who had set himself up in partnership in 1919, became Professor of Architecture at the Royal College of Art when John was two years old, designed a number of schools and hospitals in the 1930s and St. John the Baptist Church, Stoneleigh in Surrey when John was seven and who he acknowledged when he was eighty as "a brilliant draughtsman, much better than me."

* was packed off as a boarder at St. Andrew's School Pangbourne, Berkshire, set up in 1934 as an independent preparatory school for boys bound for Eton, Harrow and Winchester and later reflected that : "I think my parents were despairing of my lack of ability. I was quite good at English and I suppose the only two things that I've pursued all my life are writing and painting. In childhood I wasn't particularly aware of art or painting or drawing, I don't think I was better at it when I went to school."

* made acquaintance of the sea at the age of 13 in 1944, during the Second World War, as a boarder at independent  Eastbourne College on the Sussex coast then moved inland to Kent in 1949 to study of 'Graphic Design and Typography' at Maidstone College of Art and after graduation in the early 1950s, served his two years National Service in the Army then worked in London as an exhibition designer and typographer. 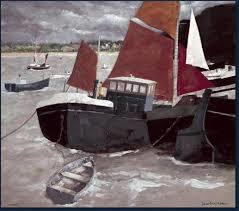 * in 1958, at the age of twenty-seven made a reacquaintance of the sea as set designer at the Theatre Royal Margate in Kent and began painting, then worked at the Castle Theatre Farnham, married Sheila Bassett in 1960 and took the decision to become a full time working artist on his 'boat gallery' and sailed the rivers and harbours of Suffolk, including Pin Mill (left) with a land address in Hadleigh and a son and daughter born in Ipswich in 1962 and '64.

* later recalled that : "I resolved to make a living at my art. I work, in the initial stages at least, direct from my subject – direct from nature... I observe, feel and interpret. I do not copy. Nor do I invent, which is why I am not an abstract painter in the accepted definition of the term.” 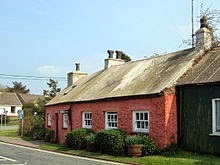 * exhibited his paintings regularly from his boat around East Anglia where they were advertised locally and held a major exhibition in Suffolk in 1966 at the Festival Gallery, Aldeburgh, having already moved to Pembrokeshire, South West Wales in 1965, where he opened a studio gallery in Croesgoch, with its view of the sea, in 1967. 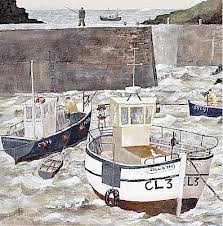 * began a career which would see him work in water colour, ink and oil to capture cottage, farm or church against the majestic, rugged landscape of the Pembrokeshire coastal area with his long, thin 'letter box' paintings in near monochrome becoming his signature style, never painted from photographs, always ventured out on foot or by boat, with sketchbook in hand at St.Davids, the harbour at Porthgain as he described to BBC Wales on the occasion of his 80th birthday : http://ow.ly/JEk37

* received accolades in the shape of : in 1992, at the age of sixty-one, election to membership of the Royal Cambrian Academy; exhibition of his work in the  National Museum Wales, the National Library of Wales and The Contemporary Art Society for Wales and in addition, in Britain, Europe, Africa and North America and the development of a large and loyal following with his biggest show in Johannesburg and a display of 65 paintings.

* in 2003 became a supporter of the 'National Literacy Trust', set up to motivate and inspire reluctant readers and fund a book-gifting programme targeting children, young people and their families in disadvantaged areas, by taking part annually in the 'Pushing the Envelope Auction', with celebrities putting their efforts to put pen to paper sold in an ebay auction and in 2008 was top seller with his mountainside cottage raising £3,000, in front of Turner Prize Winner, Grayson Perry's colourful motorbike and in 2012 raised £1,366 in front of Academy Award Winner actress, Dame Helen Mirren’s design.

* contemplated slowing down a little, at the age of seventy-seven in 2008, on the occasion of his exhibition 50 paintings, at Martin Tinney Gallery, Cardiff  when he said : “It’s a bigger show than I’ve had before and probably a bigger show than I will have again. It takes two years to get the work together so I don’t really want another large show for some time.”

* continued to paint and said : “I tell students to do something every day – even if it’s a quick thumbnail sketch. Rather like a dancer has to practise every day, a painter has to oil the hinges by doing little drawings”, but admitted : “It’s a lonely life really. One spends hours in the studio working on one’s own or walking around the countryside making notes. But I like it.” 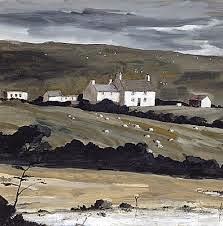 * said, on the occasion of his 2011 Exhibition at the Martin Tinney Gallery, with his scenes of striking white-washed cottages, Pembrokeshire alongside images of London and the Suffolk coastal town of Aldeburgh : “I’m well known for my dark, dramatic paintings but there are also some slightly more sensitive watercolours too. I think this collection is one of my best as I’ve been working towards it for two or three years. I shall not be going on to have too many more big shows – I’m more interested in retrospective shows now.”

* speaking on the BBC Radio Wales Arts Show to mark his 80th birthday, when questioned on his atypical studio in an old converted cowshed said : "People always say that you've got to have a good north light... I've never had a good north light in my life. You've got to be practical as an artist. There's no point in being airy fairy and artistic, putting a beret on and standing at a rickety easel; you've got to be very hands on."

* said : "I do like the older ways of life which are gone now. I mean to me life is not about sitting in front of a computer pressing buttons."

* in his passing, was paid tribute by the BBC :  http://ow.ly/JGBze and Huw Davies, of Harbour Lights Gallery in Porthgain, who recognised :

"He was dedicated to his work and had an incredible influence on Pembrokeshire and Welsh art. He was a great influence and friend to many artists and a mentor to many young artists. He was a very tender, gentle person and he would always donate pictures to different local causes. He was a beautiful man, a very special man and everybody loved him." 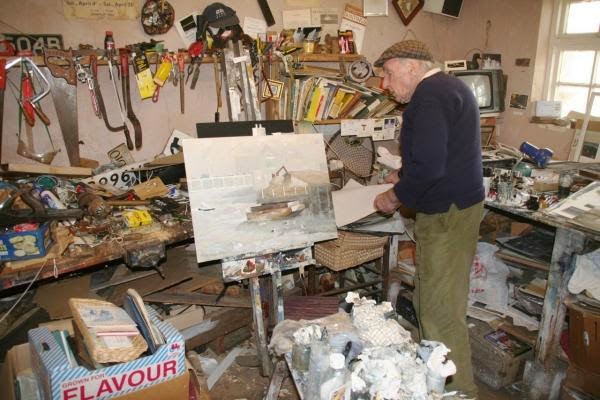