Field Marshal Lord Bramall, former Chief of the Defence Staff and veteran of the Normandy landings, is 92 years old. Born in 1924 he was educated at Eton, on whose playing fields, according to the Duke of Wellington, the Battle of Waterloo was won.
At the age of 20, during the Second World War in 1943, he was commissioned into the King's Royal Rifle Corps and the following year, took part in the Normandy Landings. He then fought with his regiment in North West Europe during the later stages of the War and

received the Military Cross from General Montgomery in March 1945 in recognition of his 'act of exemplary gallantry' in capturing a German Army outpost.
After the War he followed a career in the Army, was promoted to 'lieutenant' at the age of 23 in 1946, became an instructor at the School of Infantry in 1949. By the age of 34 he had been promoted to 'major' and after a series of subsequent promotions, finally became 'Field Marshal' and 'Chief of the Defence Staff'  at the age of 59. He retired from the Army at the age of 62 in 1985 and then served as 'Lord-Lieutenant of Greater London' from 1986 to 1998.
This old soldier's life changed dramatically last year when 20 police officers arrived unannounced at his house in Farnham, as he was having breakfast with his wife, Avril and proceeded to search the premises. As he recalled : 'My wife had Alzheimer's and when the police came she was downstairs. She kept on saying : "What are all these people doing ?"and I couldn't explain it. She was very distressed. Given my distinguished career, to have 20 policemen come through your house for ten hours, it was a bit rough' and 'the police had lunch in the pub five minutes away. If that is not making sure the public knows about it, I don't know what is.'

He was accused of the 'rape and indecent assault', of a boy between 1976 and 1984, at a military base in the West Country. His accuser was and is anonymous and known only as 'Nick'. The investigation then dragged on for nine months during which time he was not allowed to know the name of his accuser. Not a shred of evidence was produced to support the accusations and last Friday he received a brief email from the police telling him that there would be 'no further action'.
His lawyer, Drew Pettifer, said : "He's very honourable and he's a man of great integrity. For a man who has devoted himself to Queen and Country and lived his life in public service, to then suddenly be accused, essentially by a country he'd fought to protect, it was mortifying."
No apology has been offered by the Metropolitan Police or its Commissioner, Sir Bernard Hogan-Howe. Of course, as Lord Guthrie has said : “High rank and public service does not disbar a man from committing heinous crimes” and it is pertinent to ask : What would have happened, if it turned out that they had gone soft on the Field Marshal, just because he was so well- connected and if it looked as though our police were conniving in some Establishment conspiracy to cover up rape or child abuse ? In addition, it must be said that there are plenty of wholly innocent people who are maliciously accused of all kinds of things, so why should Field Marshals get an apology and not everyone else? The answer is :
His fame and distinction have not helped to make things better and easier for him, but instead, much, much worse. If he hadn’t been the famous old soldier that he is, the papers and websites would not have given the story 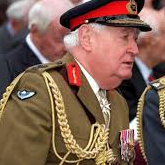 the publicity which aggravated his distress. If he hadn’t been Lord Bramall, the investigation wouldn't have been conducted with quite such zeal.

Rarely, but in certain circumstances, Britain is No Country for famous old men.