Tom Sharpe, comic novelist, whose bawdy style, savage pen and biting turns of phrase helped to earn him the title of the 'Master of British Farce', died aged 85 in the summer of 2013. It was not until he was 48 that he gained a large readership as a bestseller author when, in 1976, he introduced his most popular character: Henry Wilt, a mild-mannered teacher of literature at the fictional 'Fenland College of Arts and Technology', who gets involved in a murder investigation and claimed that the account of teaching day-release apprentice butchers and tradesmen in classes timetabled as 'Meat One' and 'Plasterers Two', were based on his own experiences as a college lecturer.


After his death in Spain, Dr Montserrat Verdaguer Clavera, his partner of ten years, apparently discovered documents in which he had written of his desire to return to the church in Throckington where his father, the Rev George Sharpe, had been a minister and was later buried. As a result, she made made a 1,200-mile pilgrimage from their home in Llafranc on the Costa Brava, via the Channel Tunnel, with the ashes propped up carefully on the passenger seat. 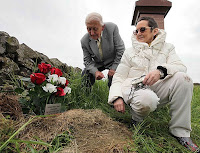 When Montserrat finally arrived at St Aidan’s Church, she dug a hole with her bare hands and conducted her own impromptu service, burying alongside the ashes :
* a photograph of the young Sharpe taken by his father in Thockrington
* a bottle of his favourite tipple, Famous Grouse Whisky
* a Cuban cigar
* his much-cherished pen with which is wrote many of his most famous novels, including 'Wilt', 'Porterhouse Blue' and 'Blott on the Landscape'.

Then she said : “In this ancient church in Northumberland, Tom Sharpe, rest in peace forever.” 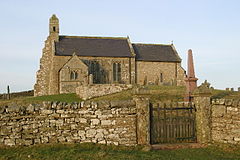 When details of the burial emerged the following year, the 'Diocese of Newcastle' said it was keen to speak to Tom's family and noted that, in relation to the use of churchyards, there were 'rules and regulations, traditions and customs' which had to be followed. As a result, last November, Rev Michael Slade, minister of St. Aidain's Church

carried out a dig at the cemetery on the orders of Euan Duff, Chancellor of the Diocese of Newcastle. Tom's ashes, his pen, the bottle of whisky, and two small tea-light candles were duly unearthed.

The Chancellor, convened a hearing of the Church of England's Local Consistory Court and has now handed down a written ruling on the matter and has issued an ultimatum to Montserrat stating that she must pay the £1,320 costs of the Court hearing, upon which she can have back the ashes and other items unearthed from the churchyard. If she does not pay up, then he will decide himself what should be done with the ashes and the other items.

The matter is complicated by the fact that throughout the hearing, Montserrat denied that she did not bury any human remains in the Churchyard. She now claims that an empty casket had been buried there and that the whole exercise had been staged for a Spanish tv documentary. The Chancellor, however, said that the Rev Slade was not at all convinced and was 'as certain as he can be that the remains found were human' and 'I am wholly unable to accept Dr Verdaguer's account of what happened and, in particular, that no human remains were buried by her. She has admitted at every stage that she entered the churchyard and buried items therein.'

Apparently, after his cremation, Tom's ashes were divided between Montserrat and his American widow, with whom he had two daughters and who was said to have 'expressed her surprise and distress' on learning of the event, although she acknowledged that he had wanted his ashes to be buried there.

The good Chancellor recorded that : 'The domestic arrangements of Mr Sharpe are not clear but it seems he was living apart from his wife prior to his death and in some sort of relationship with Dr Vergaduer. He was apparently cremated and, according to what Dr Verdaguer has later claimed, the majority of his ashes were taken by his widow, but some were left with Dr Verdaguer.'

With Montserrat denying she planted her share of Tom's ashes in the Churchyard and the Chancellor and the Rev adamant that she did plant some human ashes, one thing's for sure : Tom did not get his wish that his ashes be interred in the ground where his old Dad was laid peacefully to rest, an interesting man in his own right, who had been a Unitarian minister, a fascist, follower of Oswald Mosley and believer in Adolf Hitler, who, when the Second World War broke out in 1939, moved young Tom and the family continuously to avoid being arrested and interned with other British Nazis.
Posted by ...............................JohnBoy at 12:41