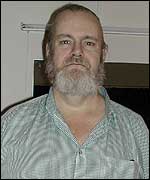 Andy "Thunderclap" Newman, who has died aged 73, was a jazz pianist and founder member of 'Thunderclap Newman', a cobbled-together session band whose 'Something in the Air' was the surprise hit of the summer of 1969. In this he has achieved immortality with his stomping Dixieland bridge which blended perfectly with his younger bandmates’ psychedelic rock : https://www.youtube.com/watch?v=k8zmkzshUvE&t=1m56s

Andy was born in Isleworth, Middlesex in 1943 during the Second World War and grew up in Hounslow, West London the son of Alice, who worked at the Ministry of Pensions and Charles, a park superintendent whose love of the piano rubbed off on young Andy who later recalled : "I somehow taught myself the play, not very well I'll admit, by watching the hands of my father when he played the piano and one of my teachers, I sort of worked something out from it but I never had a formal training." Those first musical efforts were on his great-grandmother’s old wooden-framed piano, later replaced by an iron-framed upright model. His father would play Victorian ballads and short classical pieces, but Andy’s tastes inclined towards New Orleans jazz and dance bands from the 1920s and 30s.

In 1954, having failed the 11+ exam he attended Bulstrode Secondary School for Boys and it was here that he acquired the nickname 'Thunderclap'  as he recalled : "It was my school friends in the latter part of my secondary education who called me that because they thought the clumsy style I played on the piano was reminiscent of a lightening bolt."

Andy left school at the age of 16 in 1959 having picked up playing the saxophone, clarinet and penny whistle and joined Ealing College of Art and its vibrant music scene and where, in 1961, he met the 16 year old Pete Townshend, who was two years his junior. https://www.youtube.com/watch?v=u8c1ZB_v15k&nohtml5=False&t=10m47s

With Art school behind him Andy joined the General Post Office as a trainee telephone engineer and nine years were to pass before, at the age of 25, in late 1968 he would play his role in the band which bore his name and was formed at the instigation of Pete, now known for his lead in 'The Who', and comprised Andy alongside a drummer and vocalist, John “Speedy” Keen  and a 15 year old guitarist, Jimmy McCulloch.
https://www.youtube.com/watch?v=u8c1ZB_v15k&nohtml5=False&t=2m24s

Andy, who had met Speedy a week before, first met Jimmy in the studio on the day of the recording before Christmas 1968. and he recalled that in the genesis of  'Something in the Air', Pete originally "had in mind putting us together to make some music for a film being produced by a colleague of his doing a sandwich course between Bristol University and the BBC Western Region in Bristol and we were just putting these skeleton numbers together for consideration for soundtrack which would later on be elaborated. It turned out that the film took place but they didn't use the music but Pete thought it would be a good idea if we put this together." In the recording Pete played the bass under the pseudonym 'Bijou Drains'

The name of the band had little to do with Andy who recalled : "There was no thought of the band's name at that stage. It was after the tracks were completed that they decided that they were going to do something, but they had terrible problems thinking of a name to give it. One of the names was 'My Favourite Freaks', but that got thrown out and then they had a deadline coming up because they'd done the assignment with Polydore and they had to come up with a decision I was then notified the band had been named after my nickname, 'Thunderclap Newman.'" 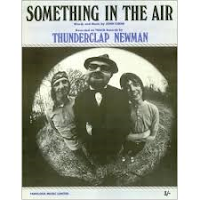 'Something in the Air' was released as a single in May 1969 and the song went to the top of the UK charts and stayed there for 3 weeks and as a gentle anthem to the prevailing mood of social and political change it struck a chord with millions of post Second World War baby boomers.
http://www.dailymotion.com/video/x15qfh_thunderclap-newman-something-in-the_music

Andy said : "I'm of the opinion that if we'd started this thing six months before it probably wouldn't have got anywhere and it probably wouldn't have got anywhere six months after. It just so happened at that particular moment in time everything came together and that just happened to be the right moment for that particular song."

The overnight celebrity the song brought took the nascent band by surprise : "To us it was like absolute Bedlam. We were just doing this music and suddenly the whole world all around us was going crazy and we were being lauded left right and centre and people would come up to me, this is a person who's never been really in the professional music business before, as though I was the person who knew how to pull hits out of the stratosphere, which wasn't true and of course we didn't really come up with anything like as sensational as 'Something in the Air' after that. One of the difficulties is that it's very difficult to repeat something like that twice." https://www.youtube.com/watch?v=ZSYqUULcCEM&t=7m52s

Performing in a trilby with short hair and spectacles, braces and bow tie, the bearded Andy seemed a generation apart from his younger long-haired bandmates. The band itself broke up in 1971 and Andy released a solo album, 'Rainbow' and recorded with Roger Ruskin Spear, who had attended Ealing Art College, before joining the Bonzo Dog Doo-Dah Band. From that point on Andy returned to the relative obscurity from whence he'd come, working as an electrician and campaigning on behalf of the housing cooperative in Clapham where he lived.


Call out the instigators
Because there's something in the air
We've got to get together sooner or later
Because the revolution's here, and you know it's right
And you know that it's right

Lock up the streets and houses
Because there's something in the air
We've got to get together sooner or later
Because the revolution's here, and you know it's right
And you know that it's right

Hand out the arms and ammo
We're going to blast our way through here
We've got to get together sooner or later
Because the revolution's here, and you know it's right
And you know that it's right

January 1 :  About 40 members of 'People's Democracy' began a four-day march from Belfast across Northern Ireland to Derry which was modelled on Martin Luther King's 'Selma to Montgomery March'. It was confronted and attacked by Loyalist crowds on a number of occasions, the most serious attack occurring on 4 January 1969 at Burntollet Bridge in an ambush planned in advance and where around 200 Loyalists, including off-duty members of the 'B-Specials', used sticks, iron bars, bottles and stones to attack the marchers, 13 of whom received hospital treatment. http://ow.ly/10jrKe 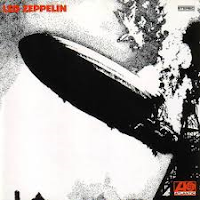 January 12 : The first 'Led Zeppelin' album, was  released including 'Dazed and Confused' :
https://www.youtube.com/watch?v=UNVRIPgfRNE&t=3m05s


Martial law was declared in Madrid, as the University was closed and over 300 students were arrested. 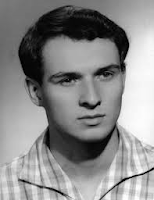 January 16  : Student Jan Palach set  himself on fire in Prague's Wenceslas Square to protest the Soviet invasion of Czechoslovakia and 3 days later he died.
https://www.youtube.com/watch?v=A26Z4MB1yJ8

March 20 : John Lennon and Yoko Ono were married in Gibraltar and proceeded to their Amsterdam honeymoon 'Bed-In' for Peace. https://www.youtube.com/watch?v=ceYbeE4jyDk&t=1m22s 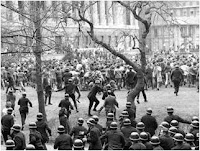 April 9 : The Harvard University Administration Building USA was seized by 300 students, mostly members of the 'Students for a Democratic Society' and before the takeover ended, 45 were injured and 184 arrested.
https://www.youtube.com/watch?v=I-QKb5E1X9U&t=0m12s
:  Fermín Monasterio Pérez was murdered by the ETA in Biscay, Spain, the 4th victim in the name of Basque nationalism.

:  A grassroots movement of Berkeley community members in the USA seized an empty lot owned by the University of

California, to begin the formation of 'People's Park'. https://www.youtube.com/watch?v=en9YzsnJFuo

May 10 :  'Zip to Zap', a harbinger of the Woodstock Concert, ended with the dispersal and eviction of youths and young adults at Zap, North Dakota USA by the National Guard.
"It's interesting to reflect that this took place just a month or two before Woodstock and so one has to wonder if  there wasn't something in the air, some kind of sense that the tribes are to be gathering."
https://www.youtube.com/watch?v=p7LjNcwqqCQ&t=1m27s

: The Battle of Dong Ap Bia, also known as Hamburger Hill, began during the Vietnam War.

May 21  : Civil unrest broke out in Rosario, Argentina, following the death of a 15-year-old student.

May 26 - June 2 : John Lennon and Yoko Ono conducted their second 'Bed-In', the follow-up to the Amsterdam event  held at the Queen Elizabeth Hotel in Montreal, Quebec and John Lennon composed and recorded the song Give Peace a Chance during the Bed-In. https://www.youtube.com/watch?v=QrM5R-OkN3s&t=0m13s

May 29 : A general strike and civil unrest broke out in Córdoba, Argentina.
.

May 30  : Riots in Curaçao marked the start of an Afro-Caribbean civil rights movement on the island.
June 7 : The rock group Blind Faith played its first gig in front of 100,000 people 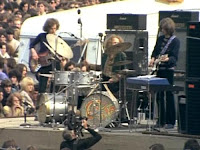 June 28  : The Stonewall Riots in New York City mark the started of the modern Gay Rights Movement in the U.S.A.

July 8 : Vietnam War : The first U.S. troop withdrawals were made.

August 5 : Mariner program : Mariner 7 made its closest fly-by of Mars and US proto-punk band 'The Stooges' released their homonym debut album. https://www.youtube.com/watch?v=FT0L2Xg5k4c

August 14 : British troops were deployed in Northern Ireland following the three-day Battle of the Bogside.
https://www.youtube.com/watch?v=Re2CFxouDS4&t=1m15s

August 15–August 18 : The Woodstock Festival was held in upstate New York, featuring top rock musicians from both sides of the Atlantic.
https://www.youtube.com/watch?v=Wyx053CNMag&t=0m17s

August 21 : Strong violence against a demonstration in Prague and Brno saw the 'Prague Spring' finally beaten' 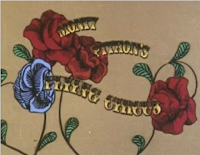 October 15 : Hundreds of thousands of people took part in 'Moratorium to End the War in Vietnam' demonstrations across the United States. 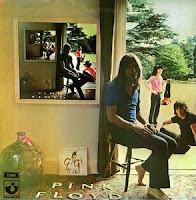 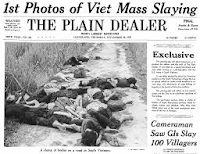 November 20 : Vietnam War: The Plain Dealer published explicit photographs of dead villagers from the My Lai Massacre in Vietnam.

December 5 : The Rolling Stones released 'Let it Bleed' with 'You Can't Always Get What You Want'.
https://www.youtube.com/watch?v=azOL4-zC2Xc&t=0m18s


And I went down to the demonstration
To get my fair share of abuse
Singing, "We're gonna vent our frustration
If we don't we're gonna blow a 50-amp fuse