Britain is a country where even more old men, marooned in rural England, lose their bus lifeline to the outside world 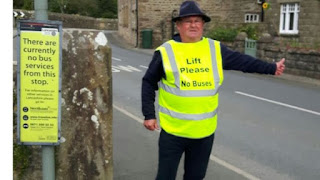 This is likely to become a more common site in future : pensioners like Duncan Foster thumbing for lifts out of their villages.
Duncan lives in the village of Whittington in Lancashire where the number of buses serving the inhabitants has been reduced from 111 a week to 5, all of which are school buses,
Duncan told BBC Radio 4's Today Programme that the situation was so bad he had been forced to resort to hitch-hiking from the village bus stop in a hi-visibility jacket and said it was "a sad state of affairs" and he and other residents feel "totally abandoned" as a result of the cut in services. 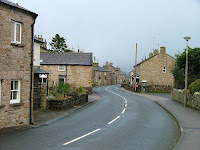 "Virtually anyone living in Whittington is obliged to have the use of a car and people have to rely on local taxis now to go to hospital appointments. I know an elderly gentleman who had to go to hospital quite regularly had to leave the village. One or two other people don't appear to be able to get out anymore. The company which ran the buses stopped doing it because they weren't being subsidised, and the local authority says it hasn't got the money to keep subsidising them and that is down to the Government."

The LGA Transport Spokesperson, Martin Tett said "Years of underfunding of the scheme has forced councils to spend millions of pounds of taxpayers' money to subsidise the scheme. This is now impossible with councils having to make savings while struggling to protect vital services like adult social care, protecting children, filling potholes and collecting bins."

Duncan and Martin, however, can set their minds at rest, since a Department for Transport Spokesperson has said :

" While decisions on funding for local bus routes are a matter for local authorities, we provide around £250m to support services every year, serving local communities up and down the country. Our Bus Services Bill will give councils powers to work in partnership with local transport companies to improve the service passengers can expect and boost bus use."

The new Bill makes pedestrian reading. It begins with :

'The loss of a local bus service, particularly in rural areas, can leave people isolated or dependent on friends and family to help them travel. But it can also be in rural areas that commercial services are most difficult to provide, because the critical mass of passengers required for a regular service can be difficult to achieve.'

It goes on to state that 'through the provisions in the Bus Services Bill .. the Department provides a range of tools and options to help local authorities deliver better local bus services, particularly in rural areas.'

Apparently these new 'tools' or 'powers' : 'include the ability to work more effectively
with bus operators through advanced quality partnerships or enhanced partnership
schemes, and the potential to establish a system of franchising.'

So there we have it 'enhanced partnerships' and 'franchising' and nary an extra £ in sight.

No extra money but a new Bus Service Law and all will be well. Magic.

My earlier post on rural isolation for old people :

Britain is a country where more and more old men, marooned in rural England and Wales, lose their bus lifeline to the outside world