Britain is no country for an old ex-coal miner Stefan Wysocki, veteran of the Battle of Orgreave and still seeking justice after all these years

Stefan will be 66 at the end of this month, but back in the summer of 1984 he was in his early thirties and in his prime as a Nottinghamshire miner. He was one of thousands of striking miners who flocked to the Orgreave Coking Plant on that hot summer's day on Monday 18 June who wanted to stop lorries carrying coke to fuel the Scunthorpe steel furnaces and thought disrupting production would help win their three month national coal strike against pit closures and job losses. The day would prove to be one of the pivotal moments, in what would be the year long strike, a bloody battle which saw Stefan and 94 other miners arrested.
https://www.theguardian.com/global/video/2016/nov/01/what-happened-at-the-battle-of-orgreave-video-explainer

At stake for Stefan and the miners was the future of their industry and livelihoods built on coal. The Government, led by Prime Minister Margaret Thatcher saw the secondary picketing at Orgreave as a threat to law and order which the police had to resist and crush.


The police on that day were determined not to see a repeat of the 1972 Miners Strike's 'Battle of Saltley Gate', where 30,000 pickets had overwhelmed 800 police officers. They now deployed around 6,000 officers drawn from 18 different forces and equipped with riot gear and supported by police dogs and 42 mounted police. 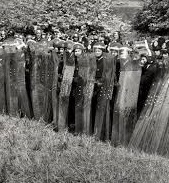 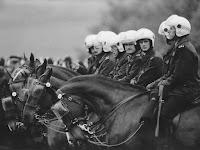 Having corralled the pickets into a field overlooking the coke works, the police positioned officers equipped with long riot shields at the bottom of the field and mounted police and dogs to either side. A road along one side of the field allowed the mounted police to deploy rapidly and a railway cutting at the top of the field made retreat by the pickets difficult and dangerous. When the pickets surged forward at the arrival of the first convoy of lorries, South Yorkshire Police Assistant Chief Constable Anthony Clement ordered a mounted charge against them. The miners responded by throwing stones and other missiles at the police lines. Clement ordered two further mounted advances and the third advance was supported by 'short shield' snatch squads who followed the mounted police, delivering baton beatings to the unarmed miners. 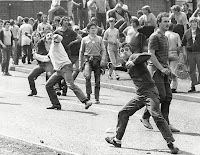 Stefan recalled the moment when he was arrested : "I'd been chased up the field and over this bridge by the police. I needed to sit down and get my breath back. Then I heard one of them say, 'Get that big bastard there with the white shirt on'." At that point, having marched him down the hill to a group of police officers he is adamant that he was : "punched and kicked. I walked in and I was carried out."

There followed a lull of several hours, during which many pickets left the scene. The coking plant had closed for the day and no more lorries were due to arrive. Those pickets that remained in the field were sunbathing or playing football and posed no threat to the police or the plant. By now, massively outnumbering the pickets, the police advanced again and launched another mounted charge. The police pursued the pickets out of the field and into Orgreave village where Clement ordered a 'mounted police canter' against pickets and onlookers alike on the streets.

The Chief Constable decided that instead of the usual charge of disorderly conduct, more serious charges of'unlawful assembly' and 'riot' would be pressed. Of the 95 pickets arrested Stefan was one of the 71 charged with riot, which at the time was punishable by life imprisonment. Stefan, who was effectively facing 25 years in prison, had been accused of stone throwing, was held in a Rotherham police cell and was told, late that night, he was to be charged with riot. He recalls : "I still cannot explain how that felt. It was unbelievable, that it was happening in this country. It was extremely stressful. But we believed we were going to prison, because they wanted to make an example of us."

Subsequently, months later the whole trial collapsed and the charges against Stefan were dismissed and and the other miners awaiting a court date were told they had no case to answer, There were celebrations among the miners and although there were questions about the conduct of the police, no one was either disciplined or held to account.

Fast forward 28 years to 2012 when the 'Orgreave Truth and Justice Campaign' was formed to agitate for a public inquiry into the policing of the events of 18 June 1984, following the success of the Hillsborough Justice Campaign on refocusing on the role of the West Yorkshire Police in the events of 15 April 1989, when a fatal crush developed at the Leppings Lane end of the Sheffield stadium before an FA Cup semi-final between Liverpool and Nottingham Forest which resulted in the deaths of 96 supporters in the crowd. The original verdict of accidental death was quashed in December 2012 following years of campaigning by families, survivors and supporters and the publication of the Hillsborough Independent Panel's Report.

In October 2012, a BBC One regional news and current affairs programme, 'Inside Out : Yorkshire and Lincolnshire', broadcast a 30-minute film about the events at Orgreave which re-examined the evidence that South Yorkshire Police had deliberately attempted to co-ordinate arrest statements in order to charge the miners with riot. Following the programme, South Yorkshire Police referred itself to the Independent Police Complaints Commission.

In 2015, the Independent Police Complaints Commission reported that there was 'evidence of excessive violence by police officers, a false narrative from police exaggerating violence by miners, perjury by officers giving evidence to prosecute the arrested men, and an apparent cover up of that perjury by senior officers.'  It did, however, announce that it would not launch a formal investigation into the events at Ogreave because too much time had passed.

The Orgreave Campaign took heart on April 26, 2016, when a inquest jury sitting at Warrington concluded in April the 96 Liverpool FC supporters who lost their lives after a crush at Hillsborough were 'unlawfully killed'. After a hearing spanning just over two years the panel also ruled the fans played no role in causing the April 15, 1989, disaster. Following the inquest verdict, previously censored documents suggesting links between the actions of senior South Yorkshire Police officers at both incidents were published. This led to renewed calls for a Public Inquiry to be held into the actions of the police at Orgreave.

Papers released in September this year, showed that the Home Secretary Leon Brittan in 1984 and the Prime Minister, Margaret Thatcher, discussed speeding up prosecutions and giving greater publicity to convictions and sentences. In Stefan's opinion :  "I think it was all set up from start to finish. I think Mrs Thatcher wanted to prove a point. She wanted it to end her way, to put us down and make us look like thugs. But we weren't. To be treated like that - it was disgusting. It's still disgusting."

In October this year the BBC TV programme 'Inside Out : Yorkshire and Lincolnshire' examined the possibility of a Battle of Orgreave Inquiry and interviewed for the programme and thinking back to that June day at Orgreave in 1984 Stefan said (at 3m07s) :  "Two police officers there had got both me arms. They said I were under arrest and I said :"What am I under arrest for ?" They said "throwing stones at police officers." So I said : "Look at me hands. They're clean, I owt thrown nothing," They said : "They all say that when they get caught." They threw me, bounced me off the riot shields, the long interlocking ones. Bust all me face, opened them up. Basically knocked ten bells of crap out of me there."
http://www.bbc.co.uk/iplayer/episode/b07y6x12/inside-out-yorkshire-and-lincolnshire-10102016

The Home Secretary Amber Rudd has now ruled out any kind of inquiry, saying very few lessons for the policing system of today could be learned from any review of events 30 years ago. She told Members of Parliament : “I know that this decision will come as a significant disappointment to the Orgreave Truth and Justice Campaign and its supporters, and I have set out in a letter to them today the detailed reasons for my decision, which include the following points. Despite the forceful accounts and arguments provided by the campaigners and former miners who were present that day, about the effect that these events have had on them, ultimately there were no deaths or wrongful convictions.”

Barbara Jackson, Secretary of the Truth and Justice Campaign, said the announcement had come as a “complete shock and a great disappointment” and the decision meant there would be “no transparency, no accountability, no truth and no justice”.

The South Yorkshire police and Crime Commissioner, Dr Alan Billings, shared her concern and said : “The former miners and their families deserved to know the truth about what happened that day. I am therefore shocked and dismayed by this decision. The government have marched the Campaign for Truth and Justice to the top of the hill only to march them down again." 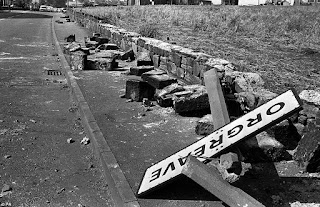