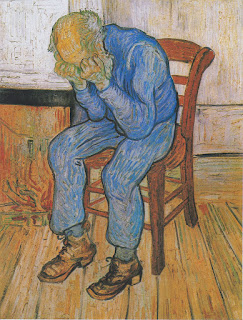 Around 500,000, mostly old men and women in Britain need home help services, but the new figures suggest that one in 25 people may be suffering at the hands of their carers.

The BBC Radio 4 'File on 4' programme has asked every council in England, Scotland and Wales with responsibility for social care, for the numbers of allegations of abuse and neglect made against home carers who were contracted by local authorities. They discovered 23,428 accusations of mistreatment, including :

Given the fact that only half the councils contacted in England, Scotland, Wales and Northern Ireland provided data to the BBC, the true number of allegations could be far higher. In fact double the figure means that the national picture could be one approaching 50,000 cases of mistreatment.

The vast majority of these allegations related to care of old men and women in their homes, with more than 9,700 involving people aged over 80. In addition, the investigation revealed how some old people were left for days without proper medication or attention to personal hygiene.

Although File On 4 pointed out that it was not possible to find out whether all these reports were valid and fully investigated, it is a known fact that complaints to the Ombudsman about home care rose by 25 %  last year to 372 and 65 % of them were upheld.

Despite this mountain of apparent abuse, just 700 of the allegations resulted in police action and there were only 15 prosecutions.

Gary Fitzgerald, from 'Action on Elder Abuse', said : "The overwhelming majority of abuse is criminal in nature and never gets prosecuted. If there's an investigation, rarely will the police be involved. If the police are involved, they don't actually want to upset that old person, so they won't prosecute. So you might get a police caution if you're lucky, or there might be no prosecution at all."

Bridget Warr, Chief Executive of the' UK Home Care Association', which represents care companies in Britain, described the findings as "horrifying" and blamed cuts to local Government budgets. She has also said :  "I think that the challenges of too little money in the system from Government, through local authorities to providers and, indeed to, workers absolutely needs to be investigated and put right.” 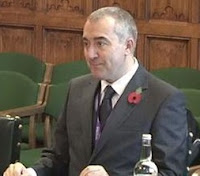 Michael King, Local Government Ombudsman said : "What we see is just the tip of the iceberg. We see a whole range of complaints; failure to look after people’s personal care needs, helping them with eating, with their own hygiene, helping them with medication, all sorts of day to day tasks that people should be getting help with." 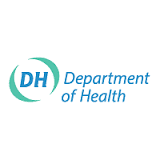 Old men and women receiving care need have no fear for the future. All will be well and help is at hand because a Department of Health spokesperson on behalf of the Government has said : "The abuse of people who depend on care services in their own homes is completely unacceptable and we are determined to stamp it out."

Anxious relatives, suspicious that their elderly loved one receiving care was being abused might want to emulate Elizabeth Budnik, who feared for her Mother and installed a hidden camera which caught husband and wife 'carers', Maurice and Deborah Campbell assaulting and abusing the 86-year-old dementia patient Dora Melton in her Peterborough home. http://ow.ly/wSJP309qHFT

Elizabeth told the BBC about the moment she had watched footage of her mother being attacked and said : "He hit her round the head with real force.He didn't even stop to think. He just lifted his hand up and hit her across the head as hard as he could."

Last September, the Campbells both pleaded guilty in court to ill treatment and wilful neglect.
Maurice Campbell was sentenced to 28 months in jail and his wife was sentenced to 38 weeks in jail, suspended for two years. The company which had employed these totally unsuitable people was 'Sagecare', operating through a contract with Peterborough City Council. A company representative said it was "appalled and shocked" by the abuse but gratified justice had been done and it is not known whether or not Elizabeth is or is not gratified by the fact that it continues to provide care for her Mother.

The BBC 'File on 4' programme ; 'Neglect : The Story of UK Homecare' : 'With an ageing population the need for carers to help elderly people stay healthy and safe in their own homes has never been greater' will be broadcast tonight. 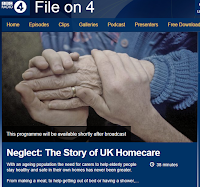