Now a the age of 84, Michael Heseltine, a member of the House of Lords, a politician considered to be one of the grandees of the Conservative Party and affectionately referred to in the press as the 'Lion in Winter', has pinned his colours to the mast over the issue of Britain's decision to leave the European Union after 40 years of membership :

" I believe the referendum result is the most disastrous peacetime result we have seen in this country. The point comes in life that you have to do what I believe to be right."

In his younger days his mane of flaxen hair and physicality, demonstrated when in 1976, at the age of 43 and a member of the Shadow Cabinet, he seized the mace, the symbol of the authority of the House of Commons and waved it aggressively towards the Labour Government Front Bench, earned him the nickname, 'Tarzan'. Michael now has the 'gravitas' he built up serving in the Governments of Ted Heath, who took Britain into the European Common Market in 1972, Margaret Thatcher and

John Major including acting as his Deputy Prime Minister. In 1990 he stood for the leadership of the Conservative Party against Margaret Thatcher and although he was unsuccessful in his bid, his action triggered her eventual resignation. His old-fashioned 'One Nation' Tory credentials were illustrated by his support for the regeneration of the City of Liverpool, at a time when it was facing economic collapse and, with his support, its subsequent transformation and recognition in his award of the status of 'Freeman of the City of Liverpool' in 2012. Now in the twilight of his political career, Michael has once again entered the limelight as one of the most prominent opponents of his own Government's support for Britain's withdrawal from the European Union.

Just as the motives of Brixiteers are firmly lodged in the past and a desire to return to a 'Great' Britain which probably never and certainly no longer exists, Michael's motives for opposing his Government's Brexit policy are also firmly lodged in his interpretation of history. He reached back all his 84 years when he said : "For someone like myself, it was in 1933, the year of my birth, that Hitler was democratically elected in Germany. He unleashed the most horrendous war. This country played a unique role in securing his defeat. So Germany lost the war. We’ve just handed them the opportunity to win the peace. I find that quite unacceptable.”

He developed his argument when he said : “We’ve now abandoned the opportunity to influence Europe, the Council of Ministers will meet and we won’t be there. Our ability to speak for the Commonwealth within Europe has come to an end. The Americans will shift their focus of interest to Germany."

Michael put his money where his mouth was on the 7th of March when, with a heavy heart, he voted against his Conservative Government's three-line whip, having done so only three times in a parliamentary career stretching back more than 50 years. Then, with the majority of his fellow peers, he spoke https://www.youtube.com/watch?v=bSCLVmTEZwU and voted in the House of Lords against his Government's wishes, not to give Parliament a veto over the final outcome of  Prime Minister Theresa May’s Brexit negotiations and as a result found himself sacked from five advisory roles in the Government.

“Everyone in this House knows that we now face the most momentous peacetime decision of our time and this amendment secures in law the Government’s commitment ... to ensure that Parliament is the ultimate custodian of our national sovereignty. It ensures that parliament has the critical role in determining the future that we will bequeath to generations of young people.”

Today, the day a letter signed by the Prime Minister is hand delivered to the President of the European Union, Donald Tusk which will signal the end of Britain's most significant diplomatic and economic association since the Second World War, the front page of the Guardian carried the headline : 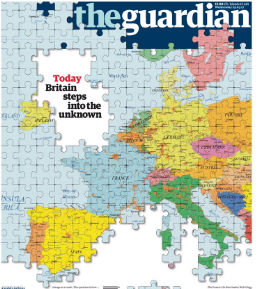 In the article that followed Michael told the paper that this move represented the : 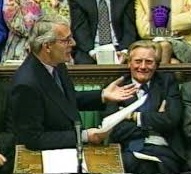 “worst peacetime decision taken by any modern postwar government. Our friends and allies in Europe will now tell us what conditions we must accept to trade in our largest market. This is the moment when the empty phrases and undeliverable promises of the Brexiteers will be replaced by the hard reality. They will decide. We will be told. It is what every Conservative Prime Minister I have worked for was determined to avoid.”

Labels: No country for Lord Heseltine