Britain is no country for old men with prostate cancer

Despite the fact that, every hour, one man dies from prostate cancer, most British men still have no idea what the gland does and some don’t even know they have one.

For years campaigners have warned that British survival rates for most cancers are way behind those in Europe and the US and studies suggest 10,000 deaths could be prevented each year if Britain merely hit the European average. The analysis shows Britain is also left trailing by developing nations such as Jordan, Puerto Rico, Algeria and Ecuador.

A study, published in The Lancet Medical Journal, analysed the records of 37.5 million patients with 18 of the most common cancers, comparing survival rates for 71 countries and found that Britain languished in the bottom half of the league table for 7 of the 18. Because women do not have a prostate gland, prostate cancer is a disease which affects only men and mostly old men at that and Britain is ranked 27th for survival rates out of the 61 countries for which data was available. 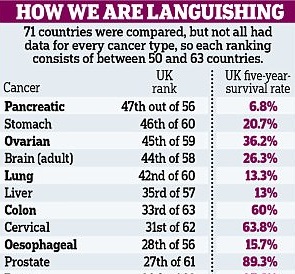 The figures indicate that in Britain almost 11 old men in 100, diagnosed with prostate cancer will die with 5 years of diagnosis and they would have had a better chance of survival in 26 other countries.

* Men enter a period of 'poor health management' in Britain their fifties and sixties, just when they become higher risk of prostate cancer.

* 45% of men aged 50 – 69 will only see their GP either when ill or in an emergency, yet we know men with early diagnosed prostate cancer often have no symptoms.

* Less than 20% of men in Britain know where the prostate gland is and what it does.

Angela Culhane, Chief Executive of Prostate Cancer UK has said : ”Ignoring your prostate can be lethal. You can’t see it, you can’t feel it, and shockingly many men only realise they have a prostate when it starts to go wrong. If men really knew what the prostate can do to them, they wouldn’t ignore it. As a country, we need to wake up and stop men dying needlessly. Ignoring prostate cancer won’t beat it – only fighting it will. Now is the time to join the fight to beat this disease."

A survey of 2,000 men by Prostate Cancer UK in 2016 found a 92% of men had no idea that the prostate helps make the fluid sperm swims in and contains muscles for ejaculation, with more than half not knowing where it was in their body and 17% were unaware of it altogether.

In addition, and of more concern, is the fact that 88% of men from higher risk groups : those over 50, black or with a family history of the disease, were unaware of their increased danger. 11% of them believed they were actually at lower risk of developing prostate cancer, and 86% of black men didn't know they were twice as likely as any other racial group in Britain.

Former England footballer, who lost his grandfather to the disease, the 52 year old Les Ferdinand, has played a role in highlighting the problem : "I'm not surprised so many men don't know what their prostate does - it's an easy gland to ignore. However when it goes wrong, it can be deadly. Prostate cancer affects one in four black men - double the risk faced by all men, and it kills a man every hour. Don't ignore the statistics and don't ignore your risk." 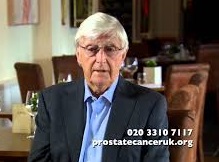 One old survivor of prostate cancer is the 83 year old TV broadcaster Michael Parkinson who has said : "Luckily for me I was aware of the potential threat my prostate posed to me long before I was diagnosed with prostate cancer. I had regular check-ups and thankfully my cancer was picked up at an early stage and I was successfully treated. However, too many men are still reluctant to go to the doctors and too many turn a blind eye to their risk of the disease. But ignoring prostate cancer won't beat it. Speak to your doctor, if not for you, for your family." 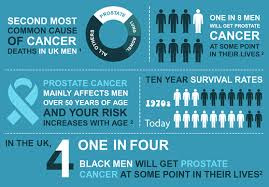 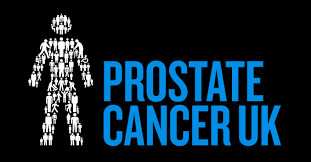