Should Britain's isolated old men and women, "take heart" that their Government has given them a brand new 'Minister for Loneliness' ?

According to research by the Co-op and the Red Cross, loneliness affects at least nine million people in Britain and the lion's share will be old. The Campaign to End Loneliness reports that over three-quarters of GPs say they are seeing between one and five patients a day who have come in mainly because they are lonely and most of them will be old.

Peter Coville expressed the essence of loneliness, when he said in his article : 'A 'Minister for Loneliness' is a sticking plaster for the ills of neoliberalism' :

'Anyone who really knows what loneliness is knows it well : that permanent vague aching sensation in your chest when you haven’t meaningfully engaged with another human being for days or weeks or even months, and yet here you are, alone once again. When it finally comes, that moment when someone says something to you that goes beyond work orders or neighbourly pleasantries, or touches your hand, or hugs you, can be so powerful that you fear your legs will give way under you, or that you will start sobbing uncontrollably. But you manage - more or less - to maintain appearances.'

Following the murder of MP Jo Cox, who campaigned energetically on loneliness, the 'Jo Cox Commission On Loneliness' was set up by the Government last year and has recently published its recommendations and has given responsibility for 'loneliness' as an add on to the Minister for 'Sport and Civil Society,' Tracey Crouch, who will be acting as the champion of old people in England, but not Wales, Scotland and Northern Ireland.

Will Tracy Crouch follow in the footsteps of William Beveridge, who after the Second World War, set out to slay the five giants who stood in the way of social progress : Want, Disease, Squalor, Ignorance and Idleness. Will she slay the new Giant of Loneliness ? 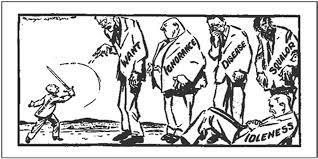 In order to slay this new giant, will Tracy set her civil servants the task of addressing his historical roots ?

Will they consider the fact that loneliness in Britain today has its roots in the 18th century ? That it is, to some extent, the negative corollary of the modern desire for individual freedom from the restrictions and constraints of traditional institutions and forms of life, like :
* religion
* family
* village
* tyrannical bosses

Will they consider the fact that loneliness in Britain today is also the negative corollary of the fact that British people have wanted to exercise greater choice over :
* their work
* the place where they live
* their moral and political beliefs

Will they consider the fact that loneliness in Britain today is the downside of this desire is the creation of the more mobile and restless individual people, who choose to opt out of traditional communities like the :
* extended family
* neighbourhood
* church
* union.

The answer to all these questions is, of course, "No." :
Brexit Britain in 2018 is not the optimistic, reconstructive Britain of 1945.
There is no real determination to solve social problems.
Tracey Crouch is no William Beveridge.

The numbers of old men and women living in loneliness will continue to increase and :


Britain will continue to be : No country for more and more lonely old men