Britain : to this day and after 25 years, still no country for an old father called Neville Lawrence seeking justice for a murdered son

Neville, who is 76, was 51 years old when, on 22 April 1993, he was told, along with his wife Doreen, that his son, Stephen had been stabbed to death in an unprovoked attack by a gang of white youths as he waited at a bus stop with his friend Duwayne Brooks in Eltham, South-East London, Unbeknown to them, over the days that followed, the police received several tipoffs and the sources pointed to the same suspects : brothers Neil and Jamie Acourt, Gary Dobson, and David Norris and despite having enough grounds to make arrests, the police decided instead, to begin surveillance of the suspects’ homes.

On the 4th May, Neville and Doreen held a press conference and aired their frustrations that not enough was being done to catch the killers and two days later, they met Nelson Mandela in London. Twenty-five years later Neville recalled : "I remember the door opened and I saw this tall, elegant-looking man come in and I remember thinking : 'I'm in a dream.'" Needleass to say, police action swiftly followed after Mr Mandela's visit : the Acourt brothers and Dobson and Norris were arrested and Duwayne Brooks identified Neil Acourt and Knight from an ID parade and the pair were charged with murder, but denied all allegations.

In July they saw the charges against Neil Acourt and Knight dropped when the Crown Prosecution Service said the evidence from Duyanne was 'unreliable' and it wasn't until the following September that they started a private prosecution against Neil Acourt, Knight and Dobson.

By this time the strain was taking its toll on Neville who recalled : "I was told by my doctor to take a spell away. I'd been through three hard years of pain and suffering" and as a consequence he felt he "couldn't take any more." "I couldn't go to another court thing and I stayed in Jamaica until it finished."

The relationship between Doreen and Neville also suffered. He said : "We never talked about what each other was going through. We were never able to sit down and discuss with each other or with anybody what was happening. It was never done. Never been able to talk about how much pain each of us was going through."

Doreen said : "I noticed, more or less from the same night that Stephen was killed, how things was changed, just like that. People say it either makes you stronger together or it tears you apart. I had to keep it together for everybody and I expected some support from him and it wasn't there. It was as if the tragedy only happened to him and the rest of us wasn't going through anything."

Neville said : "It was like I was in a different country or different space. I was totally consumed with grief."

Neville wasn't there to witness their private prosecution against Neil Acourt, Knight and Dobson at the Old Bailey collapse after Mr Justice Curtis ruled that identification evidence from Duyanne as 'inadmissible' and the were three acquitted. He knew that the 'not guilty' verdicts and the double jeopardy rule meant they couldn't be tried for the murder of Stephen again.

Neville was 55 when the Coroner’s Inquest resumed in 1997 and he heard the verdict of 'unlawful killing in a completely unprovoked racist attack by five youths'. He and Doreen formally complained to the Police Complaints Authority about the police’s handling of the investigation. On 14 February, he saw the Daily Mail front page, display the names and photographs of the Acourt brothers, Norris, Knight, and Dobson under the headline : 'Murderers' and read the paper's accusation of their killing of Stephen and challenge to sue for libel.

That summer they met the Labour Home Secretary, Jack Straw, after his Conservative predecessor, Michael Howard, had refused to see them and as a result they saw the Home Office announce a Judicial Inquiry would be held led by retired High Court Judge, Sir William Macpherson. Early that winter they read that the Complaints Authority Report on the original police investigation of Stephen's murder identified 'significant weaknesses, omissions and lost opportunities', but said that there was no evidence of racist conduct by police.

Another year turned and Neville and Doreen called on the Metropolitan Police Commissioner, Sir Paul Condon, to resign for police failings and received an unprecedented apology to them, saying : 'I am truly sorry that we let you down.'

Neville was in his 57th year when, in February 1999, he read the Macpherson Report found the police guilty of mistakes and 'institutional racism' and make 70 recommendations on changes to policing and wider public policy. He also read the report suggestion of a rethink of the principle of 'double jeopardy', to allow the retrial of acquitted defendants in exceptional circumstances if new evidence emerges of their guilt. In April, he and Doreen saw the five men arrested in 1993 deny involvement in the murder in a TV interview with Martin Bashir : Part One, Part Two, Part Three, Part Four .

The strains in Neville's marriage led to their divorce in 1999 and at the end of 2000, in acknowledgement of their failings, the Metropolitan police paid him and Doreen £320,000 in damages. But it wasn't until he was 65 in 2005, that the double jeopardy legal principle, preventing suspects being tried twice for the same crime, was scrapped for certain offences when there is new evidence.

The following year he saw the BBC documentary based on claims from former detective Putnam the the criminal father of David Norris, Clifford Norris, may made payments to DS Davidson, who served on the first police investigation, allowing them to be kept one step ahead of the investigation

Eighteen years after Stephen's murder, Neville and Doreen saw the the Court of Appeal agree that Dobson’s 1996 acquittal for the murder could be quashed in the face of new forensic evidence and had some satisfaction in the fact that, in November 2011, the trial of Dobson and Norris for Stephen's murder began at the Old Bailey. They heard Mr Justice Treacy tell the jury they must disregard previous publicity and “start this case with a clean state.”

At the end of 2012 they witnessed the conviction of Gary Dobson and David Norris 'under joint enterprise' for the 1993 murder of Stephen, after new DNA evidence had shown a blood spot on Dobson’s jacket, with a one in a billion chance of the blood coming from anyone other than Stephen and two hairs belonging to Stephen found in an evidence bag recovered from Norris’s bedroom. Neville was interviewed by Jon Snow on Channel 4 News before the verdict was announced. After the guilty verdict and the life sentences were given, Neville said, through his solicitor, that he was 'full of joy and relief” at the convictions.

That summer Neville learnt that The Guardian and Channel 4 Dispatches reveal claims by Peter Francis, a former undercover police officer-turned-whistleblower, that he was sent to spy on him and Doreen to find “dirt” on them, in the period shortly after the murder, in April 1993 and claimed that senior officers deliberately withheld this information from the Macpherson Inquiry.

This year, his 76th, Neville was told that Scotland Yard admits it has no new lines of enquiry in the investigation into Stephen's murder and is considering closing the case, but will wait until after the broadcast of a three-part BBC documentary, 'Stephen: The Murder That Changed A Nation', to see if any new leads come forward.

In that documentary they would have hear Neville say of Stephen's murder 25 years ago : "I still haven't accepted that I wasn't there. When you read the Bible it tells you in the day of Moses and the Pharaoh, one of the punishments that need to be dished out was that if you did something wrong, you lose your first born and so I'm thinking : 'Maybe I done something wrong."

Neville has said his decision to forgive the gang for the racist attack was the hardest one he would ever make, but that he was embracing his Christian faith, he is a Seventh Day Adventist, and planned to spend today, the anniversary of his son’s death in church.

“My family, especially me, I will never be the person I was before Stephen’s death. Maybe sometimes people think you can just brush things aside. You can never brush this aside, this is going to live with you for the rest of your life. This is a life sentence that you can’t finish. The only time my life sentence will be finished is when I’m in the ground.”

Neville's frank interview with the Daily Mail was published two days ago. He now spends the lion's share of his life in Jamaica and lives a short distance from Stephen's grave, but he doesn't want the case back in Britain closed completely and still, after all these years hopes for justice.


"My son is in the ground in Jamaica. The killers have walked around, some of them for 25 years, the only time I was able to see anything of my son was going to his grave. You do something, you should pay for it." 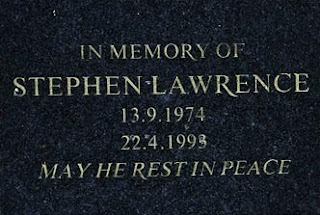 Labels: No country for Neville Lawrence