The 77 year old Roger Law, the co-creator of 'Spitting Image', the satirical puppet show broadcast on ITV from 1984 to 1996, with a peak audience of 12 million, has said the that now would be a good time for 'Spitting Image' to return, but not in Britain :  “I’ve got about 10 or 15 years if I’m lucky. Do I want to spend it repeating Spitting Image as it was? "No". I want to be somewhere you can do what you want, and that would be on the net or pay-for-view. I don’t need some halfwit at ITV or the BBC telling us what you can or can’t do. I’m too old.”

Having said that, he is prepared to admit that if money from Netflix, for example, were on the table for a US version, scripted by Americans, but made in Britain, he would consider the revival. He said : “Now it’s so extreme, what’s going on. What am I going to do for the last bit of my life? And I love to work, it wouldn’t be a waste of time. We never really did it successfully in America. We did it and blew it for all sorts of reasons. It would be very interesting.” In fact, Roger's puppet of President Trump has already been created.

Roger, who created the show with Peter Fluck, said he was pleased the people (who were probably in their 20s and 30s in the 1980s), had fond memories of the episodes, but that it had had misses as well as hits : “I remember some of it being really quite good. Most of it wasn’t and it’s the same for the people that watched it. They’ve telescoped that 13 years down to "what will the vegetables have?" It’s jolly boring of them. But in a way it’s quite good. Unless I’m foolish enough to do it again, they have a very pleasant memory of Spitting Image.”

Those pleasant memories may or may not have included the sketches of the Prime Minister Margaret Thatcher and Norman Tebbit opening the mail full of letter bombs; the Labour leader, Michael Foot, as the alien from ET reaching out with his long bony finger and saying : “Look, if you kids don’t push off I’ll … I’ll … and let me add … er … of course … erm” and an undeniably racist sketch about Japanese people, where all the characters looked the same. Roger said that sketch was 'of its time' and “It is only in retrospect that you realise it was a pretty fucking obscene thing to do.” He admits they got away with a lot and ITV "had all these worries about this" but were complicit because : "Once we had an audience and all those car ads and lager ads and god knows what, we could pretty much do what we wanted”.

Roger is donating his archive of scripts and drawings and a puppet of Mrs Thatcher to Cambridge University Library, including the 'Spitting Image' pilot of 1983 entitled 'The Late Latex Show' which featured Mrs Thatcher and Norman Tebbit eating his own children and based on the fiction that Mrs Thatcher had suggested that the unemployed eat their own bodies. 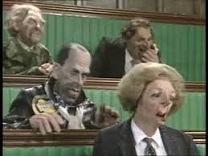 It was later reprised as a 'Modest Proposal' - as a nod towards Jonathan Swift's 1729 essay in which he suggested that the impoverished Irish might ease their economic troubles by selling their children as food for rich gentlemen and ladies.

Despite the fact that Roger has rejected the idea of reviving 'Spitting Image' in Britain he seemed more equivocal when interviewed on the BBC Radio 4 'Today Programme' this week, when he said that he was always being asked to do it, but : "I can hardly be bothered to answer the phone because they never seem to go anywhere. It's in the ether though. You can't have the situation that we have here with this sort of division that you've got and of course America's exactly the same."

Surely the political stage in Britain is full of characters which are tailor-made for a new series of 'Spitting Image' :