The 61 year old comedian, actor and writer, Stephen Fry and presenter and 62 year old, Bill Turnbull, BBC TV and Radio presenter are together the two poster boys for to prostate cancer, a condition confined to men and usually old men at that.

It's the most common cancer in men in Britain where an ageing population means more old men are developing and dying from the disease with 40,000 new cases diagnosed and around 11,000 men dieing from it each year. It can develop slowly over years and many men have no symptoms, but noticeable symptoms include needing to urinate more often and a weak flow of urine.

Stephen recorded his experience on You Tube in February and took his audience through the process he had been through of diagnosis, treatment and recovery, during the course of which he described his cancer as "an aggressive little bugger". He also said : "Here's hoping I've got another few years left on this planet because I enjoy life at the moment and that's a marvellous thing to be able to say, and I'd rather it didn't go away."
https://www.youtube.com/watch?v=9yDNAc8YS9c&t=0m01s

He said : "I went around saying to myself, 'I've got cancer. Good heavens, Stephen, you're not the sort of person who gets cancer. I know it's an old cliche but you don't think it's going to happen to you." He urged men to get their PSA [prostate specific antigen] levels checked with a doctor : "I generally felt my life was saved by this early intervention, so I would urge any of you men of a certain age to get your PSA levels checked."

Bill Turnbull also urged men to get checked for prostate cancer, when he disclosed he had been diagnosed with the disease after suffering aches and pains he put down to simple “old age”. His condition is clearly worse than Stephen's and he said that he would not be cured the cancer, which had spread to his bone in the legs, hips, pelvis and ribs and he couldn't plan "beyond 12 years.” Like Stephen, he was motivated to speak out : “If one man gets tested who might not otherwise have gone to their doctor, it’s worthwhile.”

Ironically, the success of Stephen and Bill, with more men receiving early diagnosis has meant that GP referrals for cancer 'across the board' have fallen below the 93% prompt referral standard, with more people not being seen as quickly as they should. The former Director of 'National Cancer', Sir Mike Richards said : “It is particularly down to referrals for possible prostate cancer increasing – almost certainly in response to the Bill Turnbull and Stephen Fry effect.” 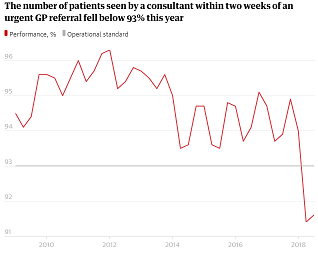