Is Britain, after all these years, finally a country for an old 'peaceful' protester called John Catt ?

John Catt, who is 94-years old, recently won his eight-year legal battle to have details of his protest activity removed from a police 'National Domestic Extremism Database'. Despite the fact that he had no criminal record, his requests to have his personal details and information about his attendance at  protests removed from police records were continually refused.


John, born in 1925, was 14-years-old when, as a farm labourer at the start of the Second World War, his boss delayed paying him and eight others and taking matters into his own young hands he led a protest on the Sussex farm and successfully demanded the money. He recalled : "The owner was a terrible man, a tyrant who used to rant and rave. It was raining hard and we were soaked. I demanded he paid the men, who were a lot older than myself. There was so much electricity running through me at the time the owner eventually paid the eight of us."

His taste for standing up to authority continued when he was enlisted into the RAF during the War. After landing what he described as a "plum job" working in the briefing room of RAF Tangmere, near Chichester, he protested to his superiors over the "dirty and filthy" conditions of the sick bay. As a result his outburst saw him confined to barracks for a month as punishment for insubordination. "That's what first got me into the bad books of the authorities".

Over the years he took part in demonstrations over nuclear weapons, the Vietnam War, perceived racism by the Metropolitan Police, Margaret Thatchers' Poll Tax, the wars in Iraq and Afghanistan and the increase in the cost of student tuition fees.

Alongside his daughter Linda, John was 86 when he obtained access to his police files using Data Protection Laws and the pair found that their attendance at demonstrations had been logged by the police. The police disclosed 66 entries collected from March 2005 to October 2009, mostly related to 'Smash EDO', the arms manufactoring giant, but also concerning 13 other demonstrations and events which included attendance at a Trades Union Congress conference in Brighton in 2006, at a demonstration at a Labour Party conference in 2007 and a pro-Gaza meeting in 2009.
For example, at the time of the Iraq War they attended a protest at the EDO factory in Brighton was recorded as :

Others followed :
'10/05/2006  The following persons were interviewed by Meridian TV, John CATT, who wore a personalised t-shirt and stated his usual stance for peace.'

'31/10/2005  John CATT was using his sketch pad to sketch a picture of the protest and the police presence.'

John said : "When I saw this list I just couldn't believe it. Why all this attention ? It's just ludicrous. It's sick. Sick to the hilt.""Taking notes and listening and filming. I mean, this is the destruction of a free society and circulating society. The triviality, the waste of time. The massive resources put into this type of police operations is a shambles."
John interviewed by the Gaurdian in January :
https://www.theguardian.com/world/2019/jan/24/john-catt-protester-wins-fight-to-wipe-political-activities-from-police-database

Now the European Court of Human Rights has handed down the ruling in the case of  'John Catt v the United Kingdom' : That his details be removed from the records. Speaking to Press Association, he said he was “immensely pleased” with the outcome of the case and felt this was an important ruling for freedom of expression, adding : “This shows they were wrong to keep the details." He accused police of a “conceited culture” because they were tasked with upholding the law. "I have always had a determination to speak up for myself and speak out about injustices in life. I will still continue campaigning.”

At the time of the judgement Rebecca Hilsenrath, Chief Executive at the Equality and Human Rights Commission, which supported John's case, said : “If you express a view in a legal and peaceful way, you shouldn’t end up as a criminal on police records. If we want a healthy democracy then we need to ensure that everyone has the right to participate fully in political life. We made clear in our evidence to the Court that the National Domestic Extremism Database does not sufficiently protect individuals’ personal information and risks having a chilling effect on legitimate political protests. We welcome today’s judgement which upholds the importance of free speech and the right to privacy.”

John's daughter Linda spoke of her “relief” that the lengthy legal battle was over, adding : “It strengthened his resolve to get justice and he has never given up. He did want to find out. We’re pleased that he’s alive to hear it.”

In 2012 his case was at first defeated in the High Court, before being won at the Court of Appeal where the judges said the information about John was at first retained lawfully, but ruled it was held for a “disproportionate” length of time, violating Article 8 of the European Convention on Human Rights. His next setback came when the Supreme Court found in favour of police lawyers who said continuing to keep the details was still lawful.

It was then that John then took his battle to Europe and argued he was not involved in criminality and the continuing retention of data about him on the National Domestic Extremism Database was unlawful and breached his right to privacy under Article 8 of the European Convention on Human Rights.

The European Court of Human Rights agreed and in its judgement said : “The quality of the relevant legal framework was not adequate in a context such as the present one, and therefore the interference was not ‘in accordance with the law’ within the meaning of Article 8. This finding is sufficient to conclude that there has been a violation of Article 8.”

John's lawyer, Shamik Dutta, said : “This ruling sets an important precedent that it is unlawful for governments across Europe to label citizens engaged in peaceful protest domestic extremists and put them on a searchable database for a potentially indefinite period.” He said said the ruling showed the system had “failed” and the police should be “focusing their resources more sensibly”.

He also said it was difficult to understand the reasoning behind why the Government sought to justify its surveillance of a 94-year-old peaceful protester and the judgment was “clear” : the police should have deleted the entries a “long, long time ago”. The ruling served as a “timely reminder” of the importance of the convention in the wake of an “ever encroaching state” and proposals to review human rights laws.

John fought said he fought “for the sake of other innocent people whose lawful political activities are being monitored by the state” and “This is an example of the erosion of freedom and a violation of private life. It is abusive collecting data and it is data control.”

The Metropolitan Police, however, is yet to confirm whether John's data will be removed from the database as a result of the ruling and has not yet responded to requests for a comment. A counter-terrorism policing spokesperson from the National Police Chiefs’ Council said it will “carefully consider” the court’s decision and the “implications for wider law enforcement/policing” and  the Home Office said it is considering the judgement.

When interviewed at the age of 91, after having access to police records had said : "I hope it exposes the shameful activity of the secret police. You could say 'Orwell' is not 'All Well'.

As an accomplished artist he was recorded several times by police for sketching the protests, a hobby he has pursued since he was a young child.

"Protesting makes me feel twice as young. There's very few of my age group - the protesters are young people and it's their future not ours. I never feel that I'm too old for it - on the contrary I try to embody the rights of humanity and combine it with my art." 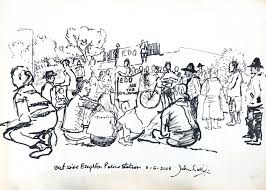