Brexit Britain is no country for a fearless old photojournalist, Don McCullin

Sir Don McCullin, a renown photojournalist, who has concentrated on the underside of society, the unemployed, downtrodden and impoverished, as well as war and urban strife, is 85 years old and not a happy man.

Commissioned by the BBC to tour England, he visited some of his former haunts. He expressed a desire not to knock his country too much, saying he has always been proud of his compatriots’ fortitude, but he added : “Things have moved on from the earlier days and the pride I had for England. For instance, we have had the most appalling, appalling violence, which has overtaken our country in the last yea and that is very, very embarrassing.”

He said : “Many people, young people, tell me they want to become a war photographer. And I say : "Look, there’s nothing stopping you. There are plenty of wars going on in all our cities in England. If you want to be a war photographer, there are plenty of social wars. There isn’t a city in England you can’t go to and find some poverty and unhappiness and tragedies.”

In his view, as a nation we “used to be very tolerant, and now we’ve lost a lot of that tolerance. Right now, England is in such an uncomfortable place, because of Brexit. I’ve found an England even more confused than ever. We’re in a mess, a God almighty mess.”

Britain was once a country for young Don when he was born in 1935, four years before the outbreak of The Second World War and when he did his 'National Service' in 1956 in the RAF and was posted to Egypt during the Suez Crisis, where he worked as a 'photographer's assistant', failed to pass the written theory paper necessary to become a photographer and so worked in the darkroom.

It was a country for him when he had a photograph he took of a local London gang in 1959, published in 'The Observer' newspaper and in swinging 1960s London, was commissioned to take the photographs of Maryon Park in London which were used in Antonioni's film 'Blowup'.
http://vimeo.com/11274009 . He also spent his time on social documentary photography in the East end of London.

Between 1966 and 1984, he worked as an overseas correspondent for the then, great 'Sunday Times Magazine', where he recorded ecological and man-made catastrophes such as war-zones, like Biafra in 1968 and victims of the African AIDS epidemic as well as hard-hitting coverage of the Vietnam War.

This was the photographer who had his beloved Nikon F camera fractured by a sniper's bullet in a rice field in Cambodia in 1970 just as he held it up to his face. Who, wounded and in a field hospital in Phnom Penh in 1970, having been hit by fragments of a mortar shell, said that he was most afraid, when he was captured by Idi Amin's soldiers in Uganda and held prisoner for four days : "They dug pits outside our cell. The sense that something awful was going to happen was constant and almost overwhelming."

He shot his most celebrated image of a dazed American marine, entitled 'Shellshocked', during the battle for the city of Hue in 1968. While closer to home, created some of the most memorable images of the early Troubles in Northern Ireland, where, during a riot in Derry, was blinded by CS gas and recovered in a dingy house which reminded him of his working-class upbringing in London and said that : "I was caught between the two sides, with the Provos warning me off one day and the British army chasing me."

A photographer, whose pictures of struggling industrial communities in County Durham in the 1960s and 70s illuminated the social strife there, has said that England in 2019 was “sliding down the global wealth scale” and “poor people, in the north of England in particular, haven’t had a fair slice of the cake”. 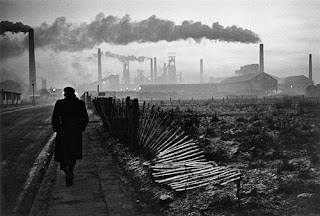 "Photography for me is not looking, it’s feeling. If you can’t feel what you’re looking at, then you’re never going to get others to feel anything when they look at your pictures."

Labels: No country for Don McCullin