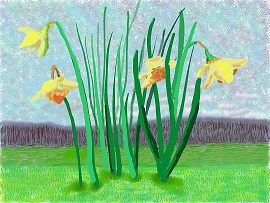 Do Remember They Can't Cancel the Spring

David, who is 83 years old, moved to Normandy from Los Angeles, his home for much of the past 55 years in September 2019. The year before, after debuting a new set of stained glass windows designed on his iPad for London’s Westminster Abbey, he spent some time in Northern France and, on impulse, bought his 17th-century garden home lined with hawthorn thickets and apple, cherry, and pear trees and said : "I fell in love with it" 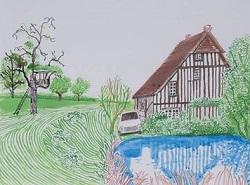 At the moment,  David is in coronavirus lockdown at home with his dog Ruby and two of his long-standing assistants, JP and Jonathan. He has a relaxed routine : waking up early to watch the sun rise, then working in his studio all morning, but more recently, has been in the garden most days, drawing the Spring Awakening on his iPad. He breaks for lunch at midday, his only meal of the day and then after an afternoon nap, he works long into the evening.

His tonic for Britain comes in the form of him sharing 10 of his most recent works from his surroundings, including an animation. When he moved to Normandy he thought it would be a good place to draw and paint the arrival of spring, something he'd celebrated before in East Yorkshire and his paintings and film formed the basis for a successful exhibition,'The Bigger Picture', in 2012 at the Royal Academy in London. At the time he was interviewed on Channel 4 News.

He was attracted to Normandy because it offered a broader range of blossoms, with apple, cherry, pear and plum trees, as well as the hawthorn and blackthorn he had painted before. 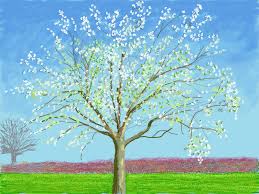 Apparently, he sent some of his work in progress to friends, which led to him releasing one image of daffodils for publication, which he called : 'Do Remember They Can't Cancel the Spring'. He is now sharing with the BBC, nine more, all painted in the last few days. 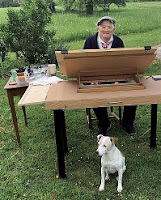 "Why are my iPad drawings seen as a respite from the news? Well, they are obviously made by the hand depicting the renewal that is the spring in this part of the world. I intend to carry on with my work, which I now see as very important."

"We have lost touch with nature rather foolishly as we are a part of it, not outside it. This will, over time, be over and then what have we learned? I am 83 years old, I will die. The cause of death is birth. The only real things in life are food and art, in that order. Just ask our little dog Ruby. Love and food is what it's all about. I really believe this and the source of art is love and I love life." 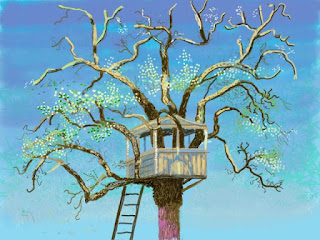