Why, after all these years, is Britain still no country for Anthony Bryan ?

“I told them I was eight years old when I arrived here, but nobody believed me. They told me I was an illegal immigrant and a criminal. They locked me up unlawfully. It was very stressful. It has been a nightmare.” 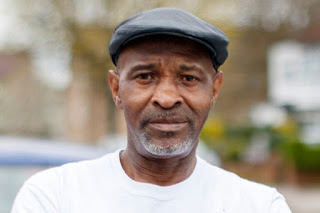 'Sitting in Limbo' is to be aired on BBC One on Monday 8 June at 8.30pm. In a 90 minute docudrama, it will tell the story of 62 year old Anthony Bryan, a builder who was mistakenly classified as an 'illegal immigrant' by the Home Office in 2015, just as the Government turned up the volume on its hostile environment policies and introduced to cut immigration numbers by making it very difficult for those without the correct documentation to continue living in Britain. At that point he had spent 50 years in Britain having arrived here at the age of 8 in 1965.

Scripted by Anthony's younger brother, the novelist Stephen Thompson, it captures the catastrophic consequences of getting placed on the Home Office list of suspected illegal immigrants. It contains the :

* sceptical language used by Home Office staff during their many interviews with Anthony.
* repeated suggestion that he was lying when he set out his life story.
* references to his children as his “alleged children.”
* headteacher who had dug up a photo of him at primary school in the 1960s as “the man you claim is your ex-headmaster”.

During the nightmare that Anthony endured at the hands of the state he was :
* sacked from his job.
* twice arrested.
* twice sent to immigration removal centres, where he spent a total of five weeks.

The actor Patrick Robinson, who plays Anthony, said he was in tears as he read the script. “I knew this was happening to lots of people. I wanted to be involved with the film in any shape or form.”

In his portrayal, Anthony's emotions shift from confusion to bemusement to desperation to silently mounting rage. Patrick said his performance was fuelled by his anger at a scandal that could easily have touched his own family. His parents came from Jamaica in the 1960s; his four older siblings were born in Jamaica, while he and two younger children were born in Britain, where his father tried to continue his career as an electrician, but later accepted work as a bus driver.

Anthony himself is worried that most people have already forgotten the 'Windrush Scandal', which is why he is so pleased that the film has been made and said : “People find it hard to believe that this happened. They can’t believe that I went through all that after 50 years here. People still trust the government; they just can’t believe they would do this to someone.”

He found revisiting the scenes in immigration detention especially painful to watch and said : “It is so close to what I went through. I hope people will watch and understand the trauma. I’d like immigration people to watch this to see what they put so many people through – people who shouldn’t be locked up in the first place.”

Anthony was interviewed for Channel 4 News in 2018. Two years on from the 'Windrush Scandal' things have not been resolved. The last figures published show that only 36 people of the 83 affected have received compensation. That totalled a mere £63,000, from a pot that officials expected to pay out between £200m and £500m.

Labels: No country for Anthony Bryan