Edmund, who is 98 years old, is one of the last remaining fighter pilots from the Second World War. While, at the age of 17, he was too young to fight in the Battle of Britain, Edmund enlisted in the RAF and joined 93 Squadron and based at Biggin Hill he saw action over British waters and above the fields of France during and after D-Day in 1944.

He was involved in a lot of combat mission fighting enemy planes and has said "At 17, 18, 19 or 20 you don't think of it as being unnerving, but you think of it as being exciting. I enjoyed it in a way. My memories are just pleasant. I know I lost a lot of friends at the time, but it helps if it's what you wanted to do. I wanted to be a pilot as I was inspired by Biggles."

Now he has been devastated by the fact that the photograph he kept hanging in the same room as his war medals in his home in Falmouth has disappeared, following a pre-arranged visit by someone who was doing some work for him. It showed the aircraft he flew and the photo was signed by fallen comrades.

He said : "I was so angry. The picture was signed by my friends. Some of whom were killed and didn't get through. Gone before they were intended. I would really like to have it returned. It used to hang on a hook in the study, it had hung there for many decades. Whoever took it had piled up books to fill in the gap in the hope I wouldn't notice. I wouldn't like to say what I want to do them, but I just want it returned to the police." 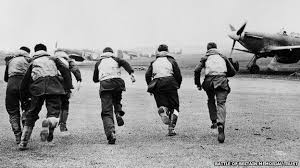 After the War Edmund trained and qualified as a GP and during the 1980s was the head of Child Health in Cornwall.

A reminder of his bravery : https://www.youtube.com/watch?v=30U9CBA7xVo