Page Views : 335
Nick Harvey, who is in his late forties has, has over the last 25 years built a successful career as a composer of musical scores for more than a hundred television productions, including, in this year alone, 'Secrets of the Museum' for BBC 2, 'Tyson Fury : The Gypsy King' for ITV and 'Portrait Artist of the Year' for Sky Arts. Nick studied music at his secondary school, Sackville School in East Grinstead and then for his degree in Music and Theatre at Dartington College of Arts in the early 1990s. In fact he had scarcely graduated when, in his early twenties he wrote the score for 'The Learning Zone' series for BBC 2 in 1995.

Although school and college must have played a role in the formation of Nick Harvey, the young composer, there is no doubt that the formative influence in his life must have been his Dad, Paul. Born in Stoke-on-Trent in 1940 and now 80 years old, he left school in the 1950s to study piano at the Guildhall School of Music. Then, like Nick, he became a composer and in his case, a concert pianist, appearing on the BBC Radio Home Service in 1964.

However, he changed direction and decided to become a music teacher when he was in his thirties in the early 1970s, shortly before his Nick was born. He then spent 20 years teaching at the Imberhorne School, a mixed comprehensive in East Grinstead. In his early years at the school, before he became the Director of Music, him came into contact with a promising young musician called Nick Van Eede who formed a school band. Having left school, Nick went on to have his biggest success with Cutting Crew in the 1980s.

Five years ago, Paul moved into sheltered accommodation and Nick said : “The moment we realised that something was awry properly when Ali, my wife, invited Dad over for Sunday lunch and he arrived at 6am, looking flustered and confused. That was a turning point.” Paul had a fall at home, then a 12-week hospital stay that prompted a cognitive decline. Occupational therapy, regular home care and a memory clinic have all played a part in slowing down dementia, but Nick said that Paul had often been depressed by his condition.

Paul has the usual problem with a declining ability to remember associated with his condition. However, sitting at a piano keyboard, his forgetfulness disappears. He said : “My memory’s fine when I’m playing the piano. I can remember all the things I’ve done. When I am looking at television or other things around where I live, then I start forgetting things and if something is not in the right place, then I panic a bit. But if I’m a bit stressed, I will go and play the piano, and I’ll be alright then.”

The fact that music can help relieve depression, anxiety and other problems associated with dementia, is attested by Professor Helen Odell-Miller, Director of the Cambridge Institute for Music Therapy Research at Anglia Ruskin University. Even those in the most severe stages of the disease, who could not speak or dress themselves, could still improvise music, she said.

According to Helen's theory, back in the 1940s, in Stoke-on-Trent, during the Second World War, when Paul was a baby, his mother, like all mothers, was naturally musical when she interacted with him, so before he understood words, he could understand his mother's expressions through rhythm, pitch and tempo. Helen said that music “is this natural hard-wired element of the brain and the social interactions and musical language that result and build up from this, which lead to procedural musical memories. The start of a song triggers the memory of the whole song, which is owing to the natural pre-language flow of expression. Songs involve patterns and we learn to communicate through patterns and these patterns become embedded in our ‘musical brain.’”

For Paul, five weeks ago, it “wasn’t a great day”, Nick said. Even piano wasn’t helping much. “I remembered this old party trick he used to do, where someone would give him four random notes and he’d compose something on the spot. The first time I saw him do this was when I was nine, he was teaching at a summer school. I remember the pride I felt. So I picked four notes out of the ether and dad did exactly the same thing. And luckily, I filmed it.” He put the resulting 2 minute improvisation using F natural, A, D and B natural and "it went crazy."

Next, after Radio 4’s 'Broadcasting House' featured the song, listeners suggested that it should be played by an orchestra, so the show’s host, Paddy O’Connell, arranged for the song to be recorded by the BBC Philharmonic. Paul watched as his tune climbed to the top of the iTunes and Amazon charts.

In the whirlwind of attention that has followed, the highlight for Paul was the chance to speak to composer and lyricist Stephen Sondheim. “That was very special – I’ve always been an incredible fan,” Paul said. Stephen said : "I love your tune. I'm going to steal it." to which Paul said :"He can have it all for nothing."

Nick said : “I’ve always felt that his music deserves a large audience and the fact that now, he is finally getting it – it fills my heart with joy. For those living with dementia, the ability to communicate is one of the last things to go. I wouldn’t be surprised if this also applies to Dad and his improvising. Dementia won’t be shutting him up for quite a while yet.”

In a Zoom meeting set up by Nick, Paul met, in turn, ex-pupil Dominic Glynn, who became a prolific composer of music for television and film whose work includes the arrangement of the 'Doctor Who' theme music which served as the series' theme for Season 23. Dominic said : "There's no way I would be having a career as a composer if it hadn't been for you Paul. You just allowed people to choose their own route to do music and that's why I felt so encouraged by the way you taught me." https://www.youtube.com/watch?v=OrIBBfAN_6U&t=4m02s

Also present was another ex-pupil, Alix Lewer, who runs a charity which brings people together through music and a choir for people with communication disabilities. https://www.youtube.com/watch?v=OrIBBfAN_6U&t=4m51s

Ex-pupil Nick Van Eede who left school to become a musician, producer and songwriter, best known for singing and writing the 1986 No. 1 power ballad, "I Just Died in Your Arms" for his band Cutting Crew, which saw international success including a top 10 placing in the UK Singles Chart. Nick said, with great emotion : "You made it so inclusive that kids who were just sitting around, not doing great academically, would shine on the stage. You gave people the chance, who wouldn't normally have had." https://www.youtube.com/watch?v=OrIBBfAN_6U&t=5m27s

In another context Nick had said : "I had young and progressive English and Drama teachers and was given the opportunity at 14 to write and sing the narrative songs for the self-written school productions and and more important, most folk didn’t think they were shite. Confidence can be a dangerous ally but at least I got an early glimpse of what really turned me on in life and apart from the obvious teenage pursuits."

Pete Talman was the Drama teacher Nick referred to and was Paul's old colleague and Head of Drama who worked with him on school productions. Paul's son, Nick said : "‘Where’s The Sunshine?’ was written for an original Imberhorne School production in the 1980s when dad was Head of Music and Pete was Head of Drama. It was a fantastic show. I remember it as if it were yesterday."

Paul's ability to compose piano music stayed with him into later life and his 'Rumba Toccata', released in 2003, is still used in grade 6 piano exams.

"I love the printed word, but where the printed word stops, you can't describe anything anymore. Music takes over because with music you can do whatever you want with it, in your mind's eye and that's what I feel about music. I think music just comes in. It's a higher level than the printed word." 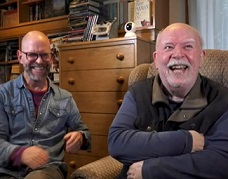