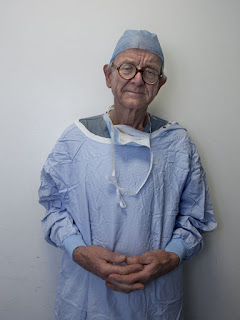 Henry, who is 71 years old and is one of Britain's leading brain surgeons and a bestselling author, has called for an urgent inquiry into assisted dying after revealing he has advanced prostate cancer which is probably going to kill him. He said dying of cancer could be “a very horrible business” but the law “insists I must suffer”.

If Henry had been Spanish, he wouldn't have a problem, because last month, Spain became the latest European country to approve legislation giving patients with incurable diseases or unbearable conditions the right to choose to end their lives with the assistance of a doctor. The same would apply if he was a citizen of the Netherlands, Belgium, Luxembourg, Switzerland, Canada, New Zealand and in the USA, a citizen in California, Colorado, District of Columbia, Hawaii, Maine, New Jersey, New Mexico, Oregon or Vermont.

Henry's call for an inquiry is backed by more than 50 MPs and peers from different political parties, some of whom have previously voted against changing the law. Their letter to Robert Buckland, the Justice Secretary, argues that Britain has now fallen behind many other countries on the issue of assisted dying.

At present, under the 1961 Suicide Act, if someone helped Henry end his life, they would be committing a criminal and face a  potential prison sentence of 14 years. The British Parliament last voted on the issue in 2015, rejecting by 330 to 118 a Private Member’s Bill to allow assisted dying for people with a terminal illness who are likely to die within six months. Yet an opinion poll two years ago found that about nine in 10 people believed assisted dying was acceptable in some situations and survey of doctors carried out by the British Medical Association last year found that half believed there should be a change in the law to allow patients to be helped to die.

Henry, whose cancer was diagnosed six months ago, said : “Having spent a lifetime operating on people with cancer, the prospect of dying slowly from it myself fills me with dread. Despite the best efforts of palliative medicine, I know that dying from cancer can still be a very horrible business – for both patient and family, despite what the opponents of assisted dying claim. I fiercely believe that if people in my situation knew they had the ability to choose how, when and where they would die, it would greatly reduce their suffering. Knowing that I had this choice, if life became unbearable, would certainly give me much greater confidence now in facing whatever the future might hold for me. But as the law stands, I am not allowed this comfort, and the law insists instead that I must suffer. Many politicians have shown a striking lack of compassion by ducking this issue for too long, and are inadvertently guilty of great cruelty”.

He continued: “Irrespective of your view on assisted dying, I would hope everyone could agree that our laws should be based on evidence and informed decisions, not alarmist, unfounded opposition that flies in the face of all the evidence from countries where assisted dying has been legalised. It’s time for all MPs to start taking this issue seriously and I urgently call upon them to undertake an inquiry into the law”.

Crispin Blunt, MP and Co-Chair of the 'All-Party Parliamentary Humanist Group', said : “In the years since Parliament last scrutinised the law underpinning our ban on assisted dying, 250 million people worldwide have gained the option of a dignified death, new evidence has emerged demonstrating that respect for autonomy can be balanced alongside robust safeguards, and professional opinion has dramatically shifted towards a change in the law”.

The Chief Executive of Humanists UK, Andrew Copson said he was "deeply sorry" to hear about Henry's  diagnosis "The ability to choose how, where, and when we die is a fundamental freedom, which cuts across party political and ideological lines. In coming together to demand an inquiry, Henry and the lawmakers who have signed this letter have put the voices of the terminally ill and incurably suffering at the centre of the debate".

Henry, who is due to start radiotherapy treatment for his cancer in a few months' time has said :

"My own suspicion as to why the opponents to assisted dying oppose a public inquiry is they fear that actually the evidence is so strong that their hypothetical arguments against it don't hold       water, that they will lose the debate". 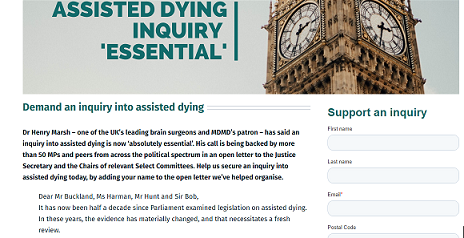