John, who died last December, at the age of 89 and crystallized his disillusion with Brexit Britain by adopting Irish citizenship and rejoining the European Union just before he died. He once described himself as "English to the core" and deplored what he saw as the aggressive nationalist sentiment behind Brexit. He published his 25th and last novel, 'Agent Running in the Field' in 2019. It has a plot line that was based covert collusion between Trump’s USA and the British Security Services with the aim of undermining the democratic institutions of the European Union.

Interviewed back in that summer he said : " I think it would be impossible to write at the moment without speaking from within the state of the nation. We are part of it. I'm part of it. I'm depressed by it. I'm ashamed of it and I think communicates itself in the book. inevitably. I'm disconcerted by sense of loyalty. I don't know where to place it. I am extremely concerned by the rise of nationalism which is quite different from patriotism. For nationalism you need enemies and for patriotism you need your one conviction and that's the difference".
His attitude to Brexit was expressed by one of the characters in the last novel who said : “It is my considered opinion that for Britain and Europe, and for liberal democracy across the entire world as a whole, Britain’s departure from the European Union in the time of Donald Trump, and Britain’s consequent unqualified dependence on the United States in an era when the US is heading straight down the road to institutional racism and neo-fascism, is an unmitigated clusterfuck bar none".

In the interview he said :"What really scares me about nostalgia is that it's become a political weapon. Politicians are creating a nostalgia for an England that never existed and seeing it as something we could return to. It's used in the rhetoric of the day, particularly on the Conservative side, I believe, as a polemical weapon - that we've got to go back to the good old days, which means restoring the dignity of the British labourer and patronising concepts of that sort, which are completely impractical in our industrial age".

"I saw the film 'Dunkirk'. I thought it was, consciously or otherwise, an offensive piece of propaganda. It excluded, for instance all the Lascars who went across in their boats and it pretended that the small boats rescued everybody from Dunkirk. It was itself a prize piece of reconstructive nostalgia and it did'nt quite happen that way".
https://www.youtube.com/watch?v=F-eMt3SrfFU&t=1m44s

"The rest is something I can hardly bear - the wallowing in the '39-'40 experience. We're back to the Blitz. For Heaven's sake, how long ago was that ? I just remember the Blitz. I'm 86 and it's somehow the notion that we were all behind it all the time; that we won single handed".
https://www.youtube.com/watch?v=jvxPid5xB3Y&t=0m09s

"Who remembered, watching all those D-Day celebrations, that 30 million Russians died; that the Russians got to Berlin before we did and that there was a Second Front, which coincided with D-Day, in Russia, launched by the Russians which was enormously successful and absorbed a huge amount of Nazi troops".
https://www.youtube.com/watch?v=IdvfJFU7lvE

“The wonderful right wing military historian, Max Hastings, points out that we were bad fighters, that we were extremely badly organised, and our contribution in terms of blood and wealth and material was – I can’t say trivial, but tremendously small by comparison to the sacrifices of the other major powers. We were on the winning side by the end, but we were really quite minor players”. 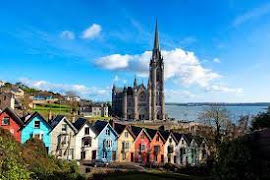 Now John's son, Nicholas Cornwell, has revealed that : “He was, by the time he died, an Irish citizen. On his last birthday I gave him an Irish flag, and so one of the last photographs I have of him is him sitting wrapped in an Irish flag, grinning his head off”. Prior to adopting Irish citizenship he visited Cork, from whence his maternal grandmother, Olive Wolfe, came and researched his roots.
When he was interviewed by the late Marian Finucane on her Irish RTÉ Radio 1 radio show in October 2019 he said : “I am indeed applying for an Irish passport. And it means a lot to me for two reasons: firstly, I want to remain in the EU and an Irish passport will enable me to do that; I am a European and I would like the passport of a European. Secondly, I have much to learn. I was completely enchanted by my journey to Ireland where I visited my grandmother’s birthplace in Inchinattin near Rosscarbery in Co Cork and that was where she grew up. And at the age of 16, from there, she went to England as a lady’s maid. That was in 1911 and a couple of years later all hell broke out in that region and there was a terrible religious war and carnage. And she escaped that, so I went and found this tiny little spot, Inchinattin near Rosscarbery.

Afterwards I went to Skibbereen where there is a heritage centre and a wonderful lady called Margaret Murphy, an archivist, first of all looked rather sternly at her computer for a long while and then she turned up to me and with a beautiful smile said, "welcome home".
When she said this to him his son said : "It was vastly moving for him, a huge emotional shift, an awareness of history and self which had genuinely eluded him his whole life".
John maintained his belief that Brexit was :
“Without doubt the greatest catastrophe and the greatest idiocy that Britain has perpetrated since the invasion of Suez. Nobody is to blame but the Brits themselves – not the Irish, not the Europeans”.
Posted by ...............................JohnBoy at 08:45