My tribute to the life of Colin Jones, published last Friday, was composed after a week of research on my part :

It was gratifying to receive this tweeted accolade from the Chartered Institute of Journalists :

However, this was eclipsed by the wonderful recognition given by 'The Times' which, in its obituary of Colin on Monday this week, used no less than 14 of the quotes I used, constituting a magnificent 25% of the text of their obituary, and proudly highlighted here by me : 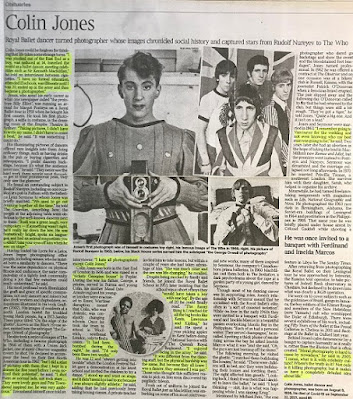 I had started my tribute with a first quote from an article written in the 'The Richmond and Twickenham Times', by Louise Hale back in 2005 under the title : 'Taking moral view through the lens' and, to my great honour, the Times writer started their obituary with the self same quote.
Louise, who presumably interviewed him and you'll notice makes no mention of Colin smoking a cigarette, had written in her introduction :

I had written in my introduction :

But for some reason, The Times obituarist in their introduction had written : 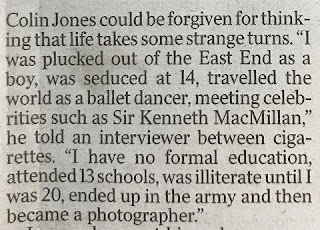 And I am left asking the question :
'Where did that cigarette, which embellished The Times quote, come from ?'
Even so, joking aside, even though I have received no credit, it has been immensely gratifying to see that so much of the work I put in researching and composing my tribute to Colin was put to such good use by The Times obituarist last weekend. I am a truly honoured old blogger and long may 'The Times' feel free to plunder my posts for the nuggets I have unearthed.
Posted by ...............................JohnBoy at 06:16