Why has Britain failed to say "Farewell" and "Thank you" to John Bartlett, the Engineer who gave it the Dartford and Channel Tunnels and the Victoria Line in London ?

John's death at the age of 94, has been noted only by my single comment on twitter and has received no attention from press or media and no obituary from either the pages of the Times, Telegraph *, Guardian or Independent. Yet, in the last century he was recognised as a premier civil engineer who, not only was instrumental in creating state of the art underground tunneling machinery, but also went on to lead and execute the construction of the Cross Thames and Cross Channel Tunnels, which have transformed the way that millions of British citizens travel by road across London and to the Continent. In addition, he was in charge of the construction of the Victoria Line in London (link) which transformed the way that millions of Londoners traveled north to south and back again, across their city by tube.
* Telegraph obituary published 19th Jan 2022

He was born, to the day, exactly 20 years before me, on the 18th June 1927, the son of Olga and Vernon, a civil engineer. He was packed off as a boarder at the fee-paying Stowe Public School for Boys at the start of the Second World War. It was here that he was captain of cricket and rugby and head boy and left in 1945, at the age of 18, with a career in the legal profession in mind.

In 1946, although the Second World War was over, conscription for men into the armed forces was to continue for two years and, at the age 18, John, given his public school background, joined the Army as an officer cadet in the Royal Engineers and held a regular army commission, being promoted to Second Lieutenant in June 1947. After he was demobbed, he gained a place at Trinity College Cambridge as an undergraduate in the Autumn of that year to study for a Law degree.

As an undergraduate he acted and sang with the Footlights and performed in Julian Slade’s 'Bang Went the Meringue' and his success in it led to an audition with the D’Oyly Carte Company, which he attended in the largest sombrero he could find and a costume to match. However, having graduated he now switched to study for a degree in civil engineering and on graduation got his first job with the contractor John Mowlem, while still continuing to study for his bar exams. At the age of 30 in 1957 he left Mowlem and he joined the consulting engineers, where his father was a senior partner, 'Mott, Hay and Anderson' and stayed with them from 1957 until his retirement at the age of 61 in 1988.

In the late 1950s he worked on the first, Thames crossing, Dartford Tunnel, now known as the West Bore. Engineers started work on this tunnel in 1936, but construction stopped with the outbreak of the Second World War. Digging restarted in 1959, which was when John became involved. The project team used a traditional tunneling shield to excavate the tunnel with a frame with pockets and each pocket had a man with a spade who dug out the earth in front of him. Built at a cost £11million, approximately £226 million in today's money, it opened in November, 1963.

In the same year, John was on a visit to Milan to advise a contractor on tunneling through the city’s gravel deposits who was laboriously using traditional methods. However, while there, he was able to see how the city's first metro line had been built, using the ‘cut and cover’ method, rather than bored tunnels. In this, Italian engineers had developed diaphragm walls, an ingenious method of constructing vertical retaining walls in non-cohesive ground by exploiting the properties of bentonite clay to support trenches during excavation.

Bentonite was a commonly available clay material that, when activated by chemical treatment to form a slurry, became 'thixotropic', which was a gel when at rest, but a liquid when agitated. On his flight back to London, John, in a stroke of brilliance, visualised how slurry trenches and mechanical digger technologies could be combined to create a new type of tunneling machine, with fluid support of the working face. 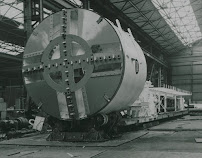 With this in mind, back at the drawing board John began developing plans for his prototype and on completion, patented the 'Bentonite Tunnelling Machine' in 1964. After that it took many years to find the funding to take the invention forward, but in 1971 his prototype machine (left) was built to drive an experimental section of tunnel in New Cross, Southeast London, for London Transport who were planning to extend the tube network. To service the machine, a spoil/slurry treatment plant was built at the head of the shaft with twin 12-inch diameter hydrocyclone units and a vibrating screen behind (right).

In technical terms, the new machine used pressurised bentonite slurry in a sealed bulkhead behind the cutting face to balance the water pressure in the ground and stabilised the tunnel while supporting rings were installed. The excavated soil was then separated from the slurry, which was recirculated to the cutting face. The experiment was deemed to be a great success, with tunnelling rates of four metres per 10-hour shift achieved. The invention, and the prototype, included all of the essential ingredients of a whole new class of slurry tunnelling machines (STMs) that were to follow all over the world, with many improvements were made on the way and by the end of the 1970s more than 1000 had been used worldwide. Unfortunately, further development happened outside Britain, since – apart from a single sewer contract in Warrington – no suitable projects emerged here for a decade or more.

In 1966 John became the partner for Mott, Hay and Anderson and director responsible for the firm’s transport and tunnelling work, including further projects in Toronto, advisory appointments in Madrid, Brussels and the Melbourne Underground Rail Loop. He also headed the project management of the Tyne and Wear Metro, coordinating its design and construction.

In 1971 John became a founding member of the British Tunnelling Society (BTS), a professional association established in London by tunnelling professionals, led by Sir Harold Harding. A 'Learned Society of the Institution of Civil Engineers', its mission being to provide a forum for meetings and discussion on tunnel-related matters. It subsequently took part in the founding of the International Tunnelling Association in 1974 and by 2016 it had 800 members.

The origins of the London Underground's Victoria Line can be traced back to the 1943 County of London Plan, but the shortages of the post-war years had caused delays. Parliamentary powers to build the line were obtained in 1955, but further funding delays meant that construction work did not start until 1962. (link) In his mid 30's, John was appointed as the 'Project Engineer' and was 41 when he saw it opened in 1968 between Walthamstow Central and Highbury & Islington and on to Warren Street a few months later and then saw the line was completed to Victoria in 1969. 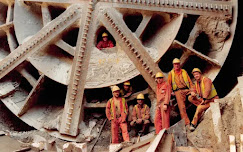 John now faced the greatest challenge of his career as the 'Engineer with 'Design Responsibility' for the British side of the Channel Tunnel, first as a Principal Designer for the scheme and following the project's revision in the early 1970s, as a 'Principal Design Consultant' for all civil and geotechnical engineering on the British section. Digging began on both sides of the Strait of Dover in 1987–88 and was completed in 1991 and the tunnel was officially opened on May 6, 1994.The digging was done by huge tunnel boring machines, known as TBMs, which cut through the chalk, collected the debris and transported the debris behind it using conveyor belts.(link)

The descendants of John's original machine have been used in many major civil engineering projects. They include 'Ada' and 'Phyllis' (left), named after Ada Lovelace, the world's the world's first computer programmer, and Phyllis Pearsall, who created the London A-Z, the giant boring machines used by Crossrail to construct tunnels between Royal Oak and Farringdon. Also 'Busy Lizzie', which was used to cut the Lee Tunnel, the first section of London’s Thames Tideway ‘super sewer’. 'Mary' and 'Sophia' (right), the two tunnelling machines which completed the Thames Tunnel, were named after the wives of Isambard and Marc Brunel who constructed London’s first Thames Tunnel over 150 years ago. (link)

When the Martime  Maritime Museum was created in Cornwall in 1992 it was the result of collaboration between the National Maritime Museum, Greenwich and the former Cornwall Maritime Museum in Falmouth. It formally opened in February 2003 and its research work was led by the 'Bartlett Maritime Research Centre' which incorporated the 'Bartlett Library'. This was a resource of books, archives and records on maritime matters, the core of which was a library collection of 16,000 books donated by John, whose interest in all types of maritime craft prompted him to start a library collection when he was 18 years old,  back in 1945. Since this time the collection has grown to include around 19,000 maritime reference books.

John served as President of the Institution of Civil Engineers form 1982 - 1983, but the greatest tribute he received from his profession came when he was 91 in 2018. As the inventor of prototype soft ground pressurised TBM technology, he was recognised by the Royal Academy of Engineering with its highest accolade, the Sir Frank Whittle Medal, named after Britain’s jet engine genius and awarded to an engineer resident in Britain whose : 'Outstanding and sustained achievements have had a profound impact on their engineering discipline'.

In a congratulatory letter to John, Ivor Thomas, the Chair of the British Tunelling Society wrote : 'Your invention of the slurry machine and its subsequent development has made a tremendous difference to how and where we can tunnel. Slurry tunneling has allowed us to develop tunnels in geology that would previously have been either very difficult and costly or impossible. Much of the Jubilee Line to the south of the River, the Channel Tunnel Rail Link Crossing and the Crossrail River Crossing were only made possible by the use of slurry machines'.

Lord Robert Mair, President of the Institution of Civil Engineers, echoed these sentiments with : 'There can be no doubt that a major revolution in the worldwide tunnelling industry was triggered by John Bartlett's invention of the bentonite tunnelling machine. It has enabled a rapid increase in tunnel construction around the world, particularly in urban areas, for water supply, sanitation and transport with remarkable benefit to humanity'.

On receiving the award, John said, with perfect self-effacement :

"Civil Engineering today is a team game. I hope members of my team will enjoy sharing the recognition given by this award. Many thanks to those who put me forward".