Britain, a country awash with Royal Jubilee celebrations, is no country for old Republicans .... for now

Elizabeth Windsor, has now sat on the throne in Britain for seventy years. The woman, who had a poor education as a girl, has neither earned her position as Head of State through ability, nor as the result of the vote of the people, but purely through the accident of birth. And this in the Twenty-first century in a country which advertises itself as a mature 'democracy'.

Republicans in Britain take heart at the fact that although polls indicate the vast majority of people in The country support the monarchy and the Queen herself is hugely popular, there is not as much support for her eldest son and heir as King Charles and surveys suggest there is growing republican sentiment among younger Britons. They might well ask themselves : Who are these people dressed in strange archaic costumes ? What are these people for ? Why am I expected to lower my head, if I meet them, making myself shorter as a mark of deference and acknowledgment that they are 'higher' than me ? 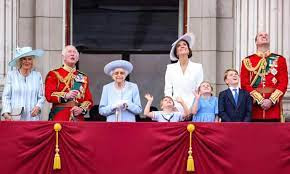 A recent Reuters article was headlined :

It reported :
'According to the survey by YouGov, 41% of those aged 18 to 24 thought there should now be an elected head of state compared to 31% who wanted a king or queen. That was a reversal of sentiment from two years ago, when 46% preferred the monarchy to 26% who wanted it replaced'.
"While there is no possibility of an end to the monarchy while the Queen remains on the throne, there is concern for the royals about a declining support among younger Britons. The survey of 4,870 adults found 53% of those aged between 25-49 supported keeping the monarchy, down five percentage points from a similar poll in 2019, while support for an elected head was up 4 points'.
Republicans, no doubt receiving this as good news and not partying this weekend :
Journalists :
Mark Seddon