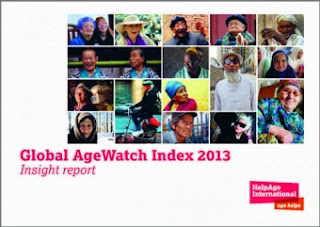 Katherine Butler reported in 'The Independent' a few weeks ago :

' Britain’s unimpressive ranking in the first ever Global Age Watch Index released by the UN this week is a symptom of this.The UK does better than Afghanistan, where you are lucky to make it beyond 59. But what pride can the fourth richest country in the world take from failing to make it even into the top 10, lagging behind not just the Scandinavians, but bankrupt Ireland and Obamacare-hating America? '

The Index, the first-ever overview of the wellbeing of old people around the world, published as their number and proportion increases at an unprecedented rate, illustrates how the world is adapting to this new reality by ranking more than 90 countries in terms of how their old people are faring.

It measures their wellbeing in terms of  four domains :

* income security : their pension income, poverty rate and relative welfare in relation to the rest of the population, where old man and women in Britain live in a country which rates :
10th.

* health status :  life and healthy life expectancy at 60 and a subjective assessment of their psychological wellbeing as to whether their life has an important purpose or meaning, where old man and women in Britain live in a country which rates :
19th.

* enabling environment : social connections, support from ralatives and friends, physical safety, how safe they feel in their neighbourhood, civic freedom, how much control they have over lives and access to public transport and so to healthcare, shops, friends and family, where old man and women in Britain live in a country which rates :
17th.

So, who are the other old men in the 10 countries around  the world who fare better than those in Britain ? 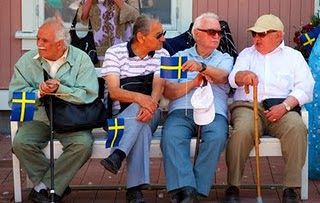 Swedish old men are on top in all 4 domains.