Britain, no country for those old men stuck in hospital wards, you have a champion in Professor Ian Philp 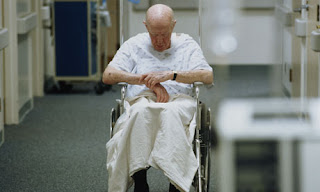 A recent article in 'The Guardian' by Ian Philp was entitled :

How to combat 'bed blocking' in hospitals.
The longer elderly people are kept on acute hospital wards, the more danger they are in of suffering complications.

I wanted to know who Ian was and found that old men of Britain have a worthy 'champion' who :

* is 'Professor of Health Care for Older People' at the 'Sheffield Institute for Studies on Ageing' which he set up and which won the 'Queen's Award for Higher Education' in 2000 for research into 'improving the quality of life for old people.'

Here he is talking to people in the street in Sheffield :
http://www.youtube.com/watch?v=MWymerzKWMQ

Ian made the following points in his newspaper article :

* going into hospital can be a frightening experience for anyone; for older people it can be harrowing.

* he had looked after a group of old people who had experienced 'delayed discharge' from an 'acute' hospital ward. Fifteen had been affected, one was 'delayed' for more than a year and out of the 15, 3 died, one of whom was an old man who acquired a chest infection the day before he was due to be discharged which progressed to pneumonia, heart and kidney failure.

* he said that :
"I remain upset and angry about how we let down this man who lived out the last weeks of his life, with great dignity, on our ward, rather than enjoying more time in his own home."

* the old man's story isn't unique and the longer an older person remains in hospital, the higher the risk of 'adverse events', loss of confidence to cope at home again, atrophy of social support networks and an increased likelihood of moving into permanent institutional care, often under pressure to clear a hospital bed.

* between 2000 and 2004, a range of 'intermediate care services' were introduced to help avoid admission to hospital and support early discharge and as a result, delayed discharges from hospitals dropped by 70%, releasing more than a million acute hospital beds.

* however, plans to complete the investment in these services by 2006 were not pursued and 'delayed discharge' not eliminated because policy attention switched to other priorities and intermediate care services 'drifted'.

* as a result, the problem of 'bed-blocking' has re-emerged and in a recent survey of doctors working in UK hospitals, 50% said the problem was worse now than a year ago.

Britain's old men, Ian's message to you is that :

* he believes it is possible to redesign our health and care system to provide the right services in the right place for you.

* if you have a fall, go off your legs or become confused, it is better to provide care and support in your own home, with expert assessment of your needs there, rather than admit you to hospital for assessment.

* those of you who are frail and in hospital will do better under the care of 'old age specialists'.

* any delay to transfer you from acute hospital care is is likely to lead to worse outcomes for you and transfer to post-acute care in the community should take place within 24 hours, with assessment of ongoing needs undertaken in the community setting.

* you take up to 6 weeks to recover from illness requiring hospital admission and during this period you need additional support, expert assessment of your ongoing needs and an approach which encourages 're-ablement', rather than simply meeting your current care needs.

* these changes achievable and says we just need to look to Hong Kong which adopted, and fully implemented, the 'English Intermediate Care Plan' and have eliminated delayed discharge from their hospital systems.