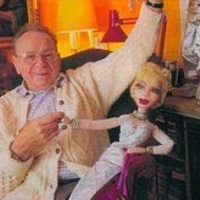 The passing of Frank Mumford, who has died at the age of 95 and whose career in puppetry spanned eight decades, took me back to those puppets on black and white children's tv in the 1950s : 'Bill and Ben', 'Muffin the Mule' and the 'Woodentops' which had entranced me as a child in the 1950s.

What you possibly didn't know about Frank, that he :

* born in Edmonton, North London, just before the end of the First World War in July 1918, a late addition to a large family and therefore a solitary child who, while recovering from mumps at the age of six, amused himself by making a miniature theatre from a Maynards sweet box and later remembered the he had “cut a proscenium in the front and had curtains and cut figures out of magazines with hairpins to hold them.”

* at the age of 10 in 1928, saw the 'British Puppet and Model Theatre Guild's Annual Exhibition' in Leicester Square and became the 'resident puppeteering teaboy' at 'Lanchester's Marionette Theatre' in Chiswick and learnt much from Waldo Lanchester (left) and Harry Whanslaw (right) who together they evolved aspects of marionettes such as the vertical control and new types of joints and methods of balancing and played a large part in the regeneration of the art of puppetry in Britain.

* was convinced he had found his vocation when his drama teacher at school gave him a copy of American puppeteer Tony Sarg's book : 'Marionettes and How to Make Them' and in 1932 at the age of 14, was accomplished enough to be billed as 'Master Mumford and His Marionettes' at  London’s Wood Green Empire.

* in the following year, had a stand of puppets at the 'School Boys’ Hobbies Exhibition' at Alexandra Palace and at 15, left school to work at the drapers,' Edmonds of Wood Green' (left) making window displays, where, to bring customers in, created a puppet theatre, performing afternoon shows and special ones at Christmas.

* still in his teens founded a company with friends and began playing at small theatres around London and in his early twenties in the 1930s, met his future wife, Maisie Tierney, who was then working at Morley's Department Store in Brixton and joined his act in 1938.

* during the Second World War in 1943, trained as an RAMC medical assistant and then volunteered to join airborn forces and qualified as a parachutist in February 1944 and was posted to the 16th Parachute Field Ambulance surgical team. http://www.paradata.org.uk/media/30480?mediaSection=Photos

* married Maisie on leave in July 1944, then in September served in the Battle of Arnhem and was working in St. Elizabeth's Hospital when it fell into German hands and was sent, along with 400 paratroopers as a prisoner of war to Stalag XIB at Fallingbostel in Lower Saxony where he and his fellow recruits were kept fit and clean by their Regimental Sergeant Major until their liberation by the Hussars in April 1945.

* returned to Britain at the end of the War and before he was demobbed, transferred to the 'Central Pool of Artistes' providing entertainment to the Armed Forces and put together a two-hour touring show with 11 staff and 100 puppets, 'Stars on Strings' for the RAF branch of the Wartime 'Stars in Battledress' Organisation and toured air bases with performances until 1946. 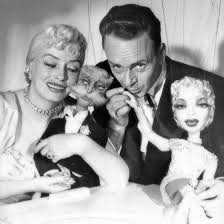 * worked in a two-handed act with Maisie from 1947, featuring 2ft-tall puppets with large heads and scaled-down bodies, hippos, skating cats, skeletons, dancers, a matador and bull and their most famous creation, 'Mademoiselle Zizi', a diminutive chanteuse based on Lana Turner and Gypsy Rose Lee.

* in addition to the puppet shows designed pantomime sets and costumes for 'Lucan and McShane Productions' and for the music-hall star George Robey in his last years on the stage,

* designed his puppets, carving the heads and hands and making the costumes with one of Zizi’s gowns, lined in shocking pink, designed by Schiaparelli and specialised in giving each character their own nuance of natural movement, from a belly dancer seductively removing her veil to Zizi demurely dabbing her face with a handkerchief to the oriental elegance of the Japanese dancer :.
https://www.youtube.com/watch?v=H4iDPKMnTcY

* enjoyed Zizi, being described in a newspaper as 'sex appeal on strings' and after a show in Juan-les-Pins, 'Miss Venus of the Cote d’Azur' and when the moral arbiters, the 'Birmingham Watch Committee', banned her at the Birmingham Hippodrome 'for kissing men in the audience', enjoyed the resulting publicity which inceased his income.

* at the age of 31 in 1949, had a 3 month contract at 'Le Beouf Sur Le Toit' in Paris and the 'Palm Beach Casino' in Cannes and in the 50s played top London nightspots : the 'Coconut Grove', ' Grosvenor House', 'Ciro’s', The 'Embassy','The Dorchester', variety shows and cabarets around the world.

* on occasion, performed in front of Charlie Chaplin and Elsa Schiaparelli, dined with Jean Cocteau , joked with Josephine Baker, performed at  private parties for the Duke and Duchess of Windsor in Paris and had a two-week run in Monaco performing for Prince Rainier and Princess Grace and recalled : “Princess Grace hardly spoke, but Prince Rainier was absolutely easy to chat to. He was the one I had to go to for Zizi to kiss, but after about 10 shows he got fed up with it.”

* in addition, designed costumes for dancing girls in 1950s and 60s Paris revues, like 'Les Scandales de Paris' at La Boule Blanche in 1962 (right) and pantomime sets and costumes for 'Lucan and McShane Productions' and the music-hall star George Robey in his last years on the stage. 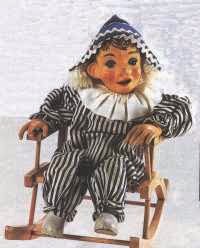 * appeared on tv working at Alexandra Palace in the early days of 'Children’s Television', carved the early versions of the 1950 'Watch with Mother' puppet character 'Andy Pandy' (left) and also featured in 'Time for Tich' in the 1960s alongside the ventriloquist Ray Alan’s dummy Tich and his pet duck Quackers.

* after Maisie’s death in 1985, carried on alone, giving his last performance in 2004 at the Leeds City Varieties and was remembered by the magician David Berglas in 2011 : http://www.puppethub.com/video/david-berglas-interview-promo

* at the age of 93 in 2011, was rediscovered by film director, Richard Butchins in the apartment he had lived in since the 1940s, along with his puppets in the attic and an archive of reel to reel film : http://www.puppeteers.org/news/blog/frank-and-maisie-mumford-documentary-film-in-the-works/ and confessed about his puppetry that : "I will say one thing about this : dedication. I lived, and I'm glad Maisie is not around to hear this, but I lived for nothing else" and saw the resulting documenatary of his life, 'An Attic Full of Puppets', shown at the Victoria and Albert Museum as part the' Suspense London Puppetry Festival'. http://vimeo.com/57865414

* was chosen by Richard as the focus of his documentary because there was one other thing he wanted to achieve "and it's probably the most important thing. That is to remind people that Elders are a resource, a repository of knowledge, wisdom and skill. Our society increasingly perceives Elders as a burden and that's wrong."