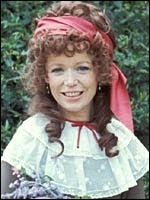 The broadcast of the first episode of the new 'Poldark' on BBC TV this evening, revives memories of the original series based on the novels od Winston Graham and broadcast in Britain between 1975 and 1977. Ralph Bates who played George Warleggan in 23 of the 29 episodes, died in 1991 at the age of 51 and Angharad Rees, who played Demelza in 28 episodes, died at the age of 68 in 2012. Pancreatic cancer killed them both before their time.

What you possibly didn't know about Angharad was that she :

* was born in Edgware, Middlesex in 1944, the daughter of a distinguished Welsh psychiatrist, Linford Rees, originally from the Burry Port, Carmarthenshire, educated at Llanelli Grammar School and a medical student at the Welsh National School of Medicine, and Catherine from the Swansea Valley.


* as a baby at the age of two, moved with the family back to Wales and grew up in Rhiwbina, Cardiff and later went to the independent Commonweal Lodge School in Surrey where she struggled with dyslexia and at 16 went on to study at the Sorbonne for two terms and then won a scholarship to the Rose Bruford Drama College in Kent,

* studied at the University of Madrid and taught English at a psychiatric clinic in the capital before returning to Britain and starting her acting career in repertory theatre in England, appeared in  'Hands of the Ripper' in 1971
http://ow.ly/K4Qvn  and then as 'Gossamer Beynon', alongside Welsh actors Richard Burton and Siân Phillips and with Elizabeth Taylor and Peter O'Toole, in the Dylan Thomas inspired tale of a day in the life of a small, Welsh fishing village, Llareggub, 'Under Milk Wood', in 1972 http://ow.ly/K4QGQ  followed by Sarah Churchill, the daughter of the Wartime Prime Minister, Winston Churchill, played by Burton in 'The Gathering Storm' tv series in 1974.

* soared to fame in 'Poldark' the BBC's 1975-77 dramatisation of Winston Graham's  novels set in 18th-century Cornwall, playing the fiery servant 'Demelza', whose beautiful smile, wide-open eyes, flowing red locks and headstrong nature won over the brooding hero and helped to attract 15 million viewers in Britain and many more around the world. http://ow.ly/K4QMa

* was involved in much location filming as the cameras moved from one evocatively sounding location to the next : Lostwithiel to Botallack, St Just to Braddock, Mount's Bay to Port Quin, Land's End to Bodmin, Lundy Bay to Pendeen, Pentireglaze to Perranporth, Port Isaac Harbour to Porthcurno Beach, Porthluney Cove to Portholland, Portloe to Prussia Cove, River Fowey to St Mawes, St Agnes to Mousehole and St Ives to Newlyn.

* got the news that the villainous banker and land owner in the series, Sir George Warleggan, played by Ralph Bates had died from pancreatic cancer at the age of 51 in 1991.

* played a part along with her brothers and sisters in supporting her father, Linford, after the death of her mother in 1993. 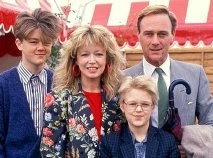 * in 1973, married the actor Christopher Cazenove with whom she had two sons, divorced in 1994 and had to cope with the loss of her eldest son, Linford James, who died at the age of 25, in a car accident in 1999.

* did poetry readings and recited in front of the 14,000 present at the Gala Opening of the Welsh Assembly in Cardiff in 1999 and in the company of Tom Jones, Shirley Bassey, Sir Harry Secombe, Max Boyce, Shakin' Stevens and Bonnie Tyler and teenage singing star Charlotte Church with the BBC National Orchestra of Wales, rounded off by a new anthem for Wales by Karl Jenkins. http://ow.ly/K4QVo

* after the end of her marriage, had a relationship with the actor, Alan Bates until 2002, who also suffered from pancreatic cancer when he died from at stroke at the age of 69 in 2003 and who had suffered the loss of his own son years earlier, but turned down his proposals of marriage and said : "We were very close, but it was difficult because I had not yet given way to my grief over the loss of my son."

* renewed her link with Cardiff when she was made an honorary fellow of the Royal Welsh College of Music and Drama.

* was appointed CBE in 2004 and the following year, married David McAlpine of the construction family. 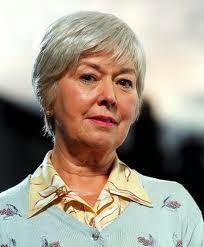 * had fellow Welsh actress Ruth Madoc say of her : “Angharad was a lovely, gentle woman and very pretty. Poldark was a landmark series which everyone remembers so well. I knew her very well socially back in London and we worked together from time to time. We did a poetry reading in the Grand Theatre in Swansea about 12 years ago. I haven’t seen her for some time and hadn’t realised she was so ill.”

The cancer which killed Angharad remains the Cinderellas of cancers in comparison with bowel, breast and prostate. Only more funding and public awareness will lead to earlier detection and, ultimately, better survival rates. It is often called the 'silent killer' since many of its symptoms mirror other less critical illnesses and doctors may not recognise these early enough, resulting in lost time before diagnosis and a terminal outcome. It kills 7,900, mostly, but not exclusively, older men and women in Britain each year with 75% of cases in those aged 65 years and over.

In 2013, Maggie Watts, who lost her husband to pancreatic cancer at the age of just 48 in 2009, launched a UK Government E-petition to push it further up the political agenda.
The petition is a call to :
'Provide more funding and awareness for pancreatic cancer to aid long overdue progress in earlier detection and, ultimately, improved survival rates'

Maggie got the  100,000 signatures she needed for her E-petition and a backbench debate in Parliament last September, in which the Health Minister Jane Ellison admitted that :  "it is a hard disease that is hard to diagnose and research... This is not easy territory, but we need to do better."

Maggie's Petition was one victory in the battle to get more funding for research into the cancer which killed Angharad in 2012. 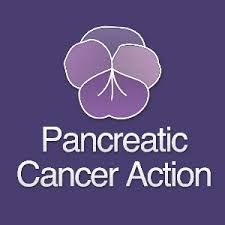