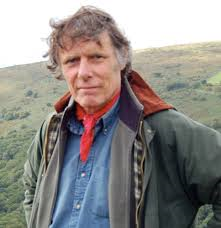 What you possibly didn't know about Patrick, that he :

* was born on in 1949 in Devizes, Wiltshire into the Vickers family and brought up in Somerset where he remembered "back to the age of three : 'I want to be a famer' and all through my childhood, I had absolutely no doubt about it, through agricultural college and after that. Not coming directly from a farming family, my Grandfather was a farmer, we just had a small holding, which was mainly about my mother's horses and it is quite rare for somebody not born into a farming family to end up as a farmer."

* after study from the age of 11 to 18 at Downside,an independent Catholic 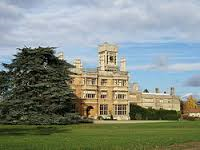 School for Boys run by lay staff and Benedictine monks attached to Downside Abbey, Somerset, and three years at Shuttleworth College, Bedfordshire, qualified in 1970 with a National Diploma in Agriculture and spent the next thirteen years working on farms in the Middle East and Africa, where he caught brucellosis from cattle which gave him continuing health problems, before settling in the village of Butleigh, four miles south of Glastonbury in Somerset.

* flirted with politics and was a member of the Ecology Party in the early 1980s serving as its 'Agricultural Spokesperson' and later ruefully reflected : "Politics is all about competitiveness and negativity and I didn't like how it brought it out in me "

* had a life-changing moment in 1983 and later recalled : "I got to the age of about thirty five and I was lucky enough to inherit some money and I bought a field", a flower-rich hay meadow, the 'White Field', " So there I was with this wildflower meadow. I had a tipi so I moved in and I lived there for eight years, but in winter there was a caravan I used to go into. I've been so, so lucky and that was the most incredible experience to have, living so close to nature, seeing the changes of the seasons, seeing different plants, getting to know them, seeing different wild animals." 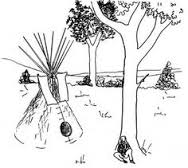 * in 1987 extolled the benefits of the tipi in his book : 'Tipi Living (Simple Living)' : "Contact with the Earth is not a metaphor in a tipi. When I sit down I can feel the skin of our Mother under my bum. I look up to see the circle of poles reaching up into the air to meet in the patch of sky through the smoke hole. In the centre of the circle the flames of an open fire dance their dance of life.  Sun, Moon and stars, clouds, wind and rain have a much more practical effect on the tipi dweller's life and I  find myself living in their rhythms rather than the clock or the calendar." 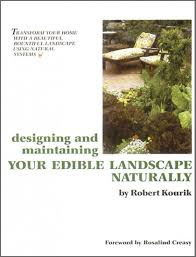 * made his living by a variety of country crafts, planted an orchard which gave him a supply of apples from September to May and turned for inspiration as an emerging permaculturalist to 'Designing and Maintaining Your Edible Landscape Naturally' by Robert Kourik with its look at the tools, techniques needed to make an edible landscape with natural, non-chemical methods and later admitted that : "right at the beginning of my permaculture career I learnt more from this book than any other."

* in 1990, at the age of forty-one made the decision to devote himself to permaculture, dropped the surname 'Vickers' and emerged a butterfly from his chrysalis as 'Patrick Whitefield', teaching his own form of land-based, practical permaculture at Ragmans Lane Farm in Gloucestershire saying : "I find permaculture makes use of the varied skills I've acquired during my life and puts them into a cohesive whole." 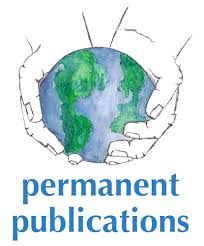 * from 1992, helped steer 'Permaculture Magazine' Practical Solutions For Self-Reliance' in its fledgling days, contributing articles, giving a detailed critique of each issue, which he humorously termed 'Slag the Mag' and later kept his benign eye on the output of 'Permanent Publications' as a sounding board and advisor.

* set up 'Patrick Whitefield Associates', based in  Leg of Mutton Road, Glastonbury, where he practised as a permaculture design consultant, passed his skills and experience on to providing residential courses, videos,  a series of you tube films for his 'The Land Course Online', all underpinned by his simple definition that : 'Permaculture means learning from nature. The aim is to make our lives more sustainable and more productive while reducing the work and energy required. We do this by taking nature as the model for designing our own houses, gardens, farms, woodlands, town and villages.'

* in 1993 published 'Permaculture in a Nutshell ' to make the subject more accessible and easy to understand and saw sell, in subsequent years, 20,000 copies with translation into seven languages and three years later : 'How to Make a Forest Garden' and in 2004, 'The Earth Care Manual', reviewed by Kim Wilde and recommended to readers in Daily Mail in which he stated that : 'Permaculture is not about dogma. It's not about knowing the right answers, but asking the right questions, the answers to which will be different for each person and each place.'

* on film, provided an example of his skill as a teacher working with a group of students learning : 'How to identify trees : What to look out for' and through him really 'looking' at trees for the first time  : "I'd like you to look at these two trees. There are various things I want you to look at. One is the general shape of the tree : has it got a single stem or many stems ?  Is it tall and narrow or short and broad ? Second thing : the bark. What's the texture of the bark like ? Third thing is : twigs and branches. Does it branch 'opposite' or 'alternate' ? What I mean by that, if you come and have a look closer at this twig..."  http://ow.ly/JYO9I

* in 2006 featured in a Channel 4 TVs : 'It's Not Easy Being Green' programme with Brigit Strawbridge taking part in one of his courses, on which she had : "probably learnt more in the last week and a half, than in the last 10-25 years" http://www.youtube.com/watch?v=uele2a0P-zY&t=13m20s and in 2009 featured in the BBC TV 'Natural World' episode 'Farm of the Future' and was introduced by Rebecca Hosking (right) as Britain's "leading expert on permaculture" and in which he stated : "People often think that there are two ways of doing things. One is by drudgery and the other is by chucking fossil fuel at it. Permaculture is about a third way of doing things and that is by design, by conscious design" in answer to Rebecca's question :http://www.youtube.com/watch?v=ixx1c3RSw_8&t=28m33s

* in 2008 parted with his beloved Whitefield and said : "Recently I gave it to the Somerset Wildlife Trust and it gives me great satisfaction to know that it will be looked after in perpetuity" and the following year published 'The Living Landscape : How to Read and understand it' and stated 'For the purposes of landscape reading the most important groups are trees and wild flowers. Although animals are just as much a part of the landscape as plants, they're less useful because they move around and hide while plants stay put' and in 2014 published his last book, 'How To Read The Landscape'  devoted to rural and urban landscapes which gave testimony to his ability to  'farm' the landscape as he travelled through it.

* in 2011 spoke of his part played in 'Transition Glastonbury', part of the 'Transition Network' founded in 2004 by Rob Hopkins to 'inspire, encourage, connect, support and train communities' to reduce Co2 emissions : "My favourite project has been 'Fruit Trees for All', in which we buy fruit trees wholesale for people to grow in their own gardens. What a buzz! My favourite moments have been the Harvest Shows in September, when the town comes together in celebration of what we grow to eat in our gardens and allotments."

* to mark 'International Permaculture Day' in 2012, gave a message to fellow permaculturalists  : "Get to know your neighbour, get involved locally get involved in the local community. We should get to know our neighbours whether they are interested in permaculture and sustainability or not and I don't mean trying to preach to them. I mean, just to get to know them. So when the crunch comes you've got that firmer base of connection with people which can be so valuable." http://www.youtube.com/watch?v=wW5esmyxx0w&t=5m59s

* in later life, painted a poetic picture of himself at the age of thirty-five, when walking in the countryside, sheltered from the rain under a yew tree and sat down on the edge of the wood
" looking out over the countryside beyond. And after a time a hare lolloped along with exactly the same thing in mind and sat down in front of me, also looking out over the countryside. And so for a little while, we just sat there, me and the hare. And eventually me being the sort of fidgety, kind of can't- stand-still-for-long human being that I am, I fidgeted. The hare looked round and said : "Oh. Better go". So he lolloped off. So ever since then I've had a very strong affinity with hare. Not the kind of animal I would have chosen consciously as a 'pair animal', but of course all this stuff is unconscious." http://www.youtube.com/watch?v=zABtAgrlCYE&t=5m48s

* was philosophical about death and wrote in 2011 : 'Is it a cause for grief when a person is old and approaching death? I’m past my sixtieth birthday and I’ve got my bus pass. I’m old. I’m going to die. OK, maybe it will be a decade or two, but I’m well past half way. Yes, there are things I used to be able to do which I can’t do now. But I don’t find this sad. It’s just the way it is. We’ve all got to die some time, and so has the world, or at least the world as we know it.' 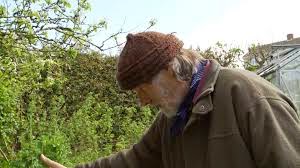 'In the global situation we find ourselves in now, it is very easy to get depressed and it's very easy to say : Why are we bothering to do this stuff ? We may not succeed. It's the wrong question. The question is :     How do I want to live my life ?'

Also this year :
Wednesday, 18 February 2015 :
Britain is no longer a country for and says "Farewell" to an old historical ecologist called Oliver Rackham
http://britainisnocountryforoldmen.blogspot.co.uk/2015/02/britain-is-no-longer-country-for-and_43.html