Britain is no longer a country for and says "Goodbye" to a scarce 'old' Member of Parliament for Sheffield and ex-coalminer, Harry Harpham

When Harry became an MP at the General Election last year, he had already served Sheffield on its City Council for fifteen years, he said : "I love our city. It’s my home. It’s where I’ve raised my kids, where I live and where I represent. Thank you for electing me as your MP, so I can take the views and issues of people here to Westminster." Diagnosed with cancer just a week after the Labour Conference in September, Harry has died at the age of 61 and the people of Sheffield know they have lost a great champion.

Harry was born Robert Harpham in the market town of Mansfield in Nottinghamshire, described by D.H.Lawrence in Lady Chatterley's Lover as 'that once romantic now utterly disheartening colliery town', in 1954. Harry admitted that : 'I had little in the way of education – lads from my community didn’t stay on in school, we left as soon as we could, put on a hard hat and went down the pit' and in his maiden speech as a Member of Parliament last year said : "I am originally from Nottinghamshire. At 15, I left school on a Friday and started down the pit on the Monday morning. I had no qualifications to speak of."

The pit in question was Clipstone Colliery, where, on his second day down the pit, he was given a copy of Robert Tressell's 1911 socialist novel ‘The Ragged-Trousered Philanthropists’ and found the book ‘fired his enthusiasm’ for politics. 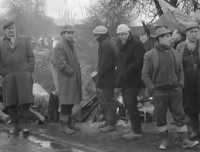 At the age of thirty and out on strike in the massive 1984 coalmining dispute, he was an enthusiastic NUM member and colliery rep. For a number of reasons, the Nottinghamshire miners were less militant than their Yorkshire counterparts and Harry and his 60 fellow miners at the colliery, who remained loyal until the strike ended in 1985, found themselves suddenly living in a hostile village where former friends would not look him in the eye. https://www.youtube.com/watch?v=KfshBtU2r3o&t=0m23s

Along with the other strikers at Clipstone, Harry had been led and probably shared the sentiments of fellow coal-face worker, John Lowe, who recorded at the end of the strike : 'This report is the hardest I’ve ever had to try and write. I feel so full of emotion – anger, frustration, shame, bewilderment. I’m finding great difficulty in putting my thoughts together. Mid-afternoon the news came through that the conference had decided narrowly, ninety-eight to ninety-one, that the strike was at an end. My wife cried tears for me that I couldn’t cry for myself; they’ll probably come later.'

With his first hand experience of the struggle between the NUM and the Thatcher Government it is not surprising that he said : 'For someone from my background who had experienced what a Tory government meant for people like me and communities like mine, joining the Labour Party was a given. I joined because then, as now, working people have never been handed change, we've had to fight for it and I wanted to play my part.'

Having lost his job in the aftermath of the strike in 1985, Harry 'got a second chance in education' and attended Northern College based at Wentworth Castle in Barnsley, South Yorkshire, which had been founded seven years before, with trades union backing and a mission to 'transform individuals and communities' and the promotion of a 'pedagogy of social purpose education.' After two years of residential education, Harry moved to Sheffield and at the age of 33 undertook his three year degree course and in 1990 'was proud to graduate from the University of Sheffield.' He was, by now, not only a Labour Party member but also an active campaigner in the Anti-Apartheid Movement and CND. 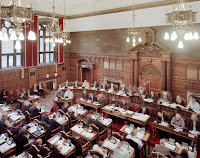 Harry took his first step into urban politics as representative of Manor Ward on Sheffield City Council at the age of 46 in 2000 followed by Darnall Ward in 2004. He lived in one of the most deprived districts, worked as a warehouseman by night and advice centre volunteer by day and said : "I live in the real world. I get it." In 2012 he was elected as Deputy Leader of the Council in 2012 and not unsurprisingly, chaired the 'Primary Capital Programme' to ensure primary schools were fully equipped for 21st Century learning and was justifiably proud to have 'led a delegation to Downing Street to secure half a billion pounds of funding for local schools.'

In addition, as Cabinet member for 'Homes and Neighbourhoods', he oversaw the implementation of the £700 million 'Decent Homes Programme' in the City, a massive undertaking as Sheffield has twice the national average number of council homes, and successfully brought council housing back under municipal control from an arm’s length company and said that he was 'incredibly proud to have overseen the biggest expansion of Council housing in Sheffield for 20 years by bringing stock back in house and building new houses too.'

He also 'led the charge to make our Council a living wage employer - a fair day's work should always mean a fair day's pay' and expanded recycling across our city as Cabinet member for 'Streetscene and Waste Management' and made the decision to stand as an MP : 'because time and again people say they don't want politicians who are 'all the same'. I'm an ordinary bloke who used to work down for the pit for a living. I've worried about pay the bills like everyone else here. I think I fit the bill of someone who has lived a 'real life'.

When former Home Secretary David Blunkett stepped down at the 2015 General Election as the MP for Sheffield, Brightside and Hillsborough, Harry was asked by the Labour Party to put himself up as the candidate and recalled : “I thought you’re mad! But actually I was quite proud that people thought I was able to do that job so I talked it over with my family and decided to go for it. I heard all the time how I’ve got huge shoes to fill."

He was out and about on the streets of Sheffield drumming up votes in the General Election in April 2015 where he explained to first time voter Saeed Amin : "The Conservative Government only looks after those who have plenty. They believe that those at the top should get more and it trickles down to the rest of society, which has been proved wrong time and again and only Labour will create an economy that works for everybody so that everybody gains from the economic recovery." https://www.youtube.com/watch?v=6rgwzuSD7Ms&t=1m59s

Once elected with his 14,000 vote majority, Harry knew that his mining background gave him and advantage : “It gives me a unique perspective and a different voice that we don’t usually get in Westminster. I didn’t come up through the usual ranks.” Ideally suited to serve as the Parliamentary Aide to Shadow Energy Secretary, Lisa Nandy, he also served on the 'Environment, Food and Rural Affairs Select Committee.' He was a member of the 'All Party Parliamentary Humanist Group' and registered his support for the 'Brain Tumour All Party Parliamentary Group' which had been set up by John Bercow in 2005 : 'To raise awareness of the issues facing the brain tumour community in order to improve research, diagnosis, information, support, treatment and care outcomes.'

Harry said in his Maiden Speech in the House of Commons in June last year : "I got into politics because I know the good that can be done by public servants working in the interest of the communities they serve. From the Opposition green Benches, I will do what I can to protect those services from ideological attacks that would reduce them to a shadow and leave those they serve paying the price."

He was perfectly attuned to the needs of his more needy constituents and stated : "Much of the so-called economic recovery in our area has come in the form of low-paid, zero-hours contract work, leaving families unable to budget from one week to the next. Despite the Chancellor's crowing, far too many of my constituents are still struggling to make ends meet. There are 6,000 households in my constituency living in fuel poverty, 14% of the total in the whole of the Yorkshire and the Humber region. That is one of the issues I will take up vigorously over the coming weeks and months."

Harry made his final contribution on the floor of the House of Commons a few weeks ago when he asked David Cameron : "The Prime Minister may be aware and should be aware that Sheffield Forgemasters announced this morning a loss of a hundred jobs in this crisis-hit industry. Many of those jobs will be in my constituency. We have had lots of warm words, hand wringing and some crocodile tears from the Prime Minister and Ministers in this Chamber about the tsunami of job losses across the steel industry. Can he tell me when he's actually going to do something to support world class companies like Sheffield Forgemasters." http://www.bbc.co.uk/programmes/p03g1jv3?ns_mchannel=social

“If somebody had told me as a 16-year-old starting down the pit that one day I’d end up representing a constituency sitting on the green benches at the heart of democracy, there would have been a few choice words and I’d have never of believed it.”