Research by the charity, 'Independent Age' has found many older pensioners are worse off than their younger counterparts by thousands of pounds a year on average and around 20% of over-75s, up to 950,000 old men and women, are living below the poverty line. It said that this 'Silent Generation' of pensioners who, as children, lived through the Second World War, are being forgotten while public discussion focusses on the wealth of younger, post-Second World War 'Baby Boomers.'

ndependent Age's Chief Executive, Janet Morrison, said the Britain's 11.8m pensioners could not be considered as "one group" and "It would be foolish to assume that inequality simply ceases to exist at retirement age, but that is exactly what some of the recent rhetoric around 'intergenerational unfairness' does."
“This is the ‘Keep Calm and Carry On’ generation that lived through the Second World War. The older people we spoke to as part of this research talked about ‘keeping a brave face’, ‘cutting their cloth’ and not wanting to ask for help. There is a real risk that this generation will be forgotten and left to suffer in silence.” 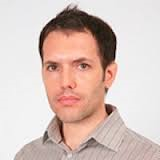 Dr Matt Barnes from the Department of Sociology, City University London, who worked on the report with Independent Age, said : “It’s all too easy to take the narrative about wealthy Baby Boomers and apply it to all pensioners. But this report shows that just doesn’t hold true. There are huge variations in incomes of pensioners, with hundreds of thousands of older pensioners living below the poverty line."

The Report argues that : 'It is vital for the government to take concerted action to ensure older people have the support they need to live independently, and to maintain their dignity, choice and control.'
Needless to say, we can rest assured that little or nothing will be done for this group which constitutes the 'weakest of the weak' in Britain in 2016, the estimated 950,000 pensioners in this older age bracket who live in poverty.

This Silent Generation consists of men like 86 year old widower, Jack, who
doesn’t spend as much money now as he used to. He doesn’t buy any new clothes and he doesn’t go to the pub anymore and said :
“I know I have to spend less. You know your commitments. And the thought of being without a penny would be terrible. I wouldn’t ask anyone for help, wouldn’t want to rely on anyone." Having around £1,500 savings, he said : "I've got enough in the bank to bury me, so my daughter doesn't have to do it."
With £1,500 in the bank Jack isn't one of those 1.1 million old people over the age of 75 who have no savings at all, but is one of the 750,000 who have no source of income other than their state pension and benefits. Living in poverty means he lives on less than £134 a week and below 60% of household median average for the rest of the population.

Jack certainly is part of the cohort of poor pensioners who don' t : 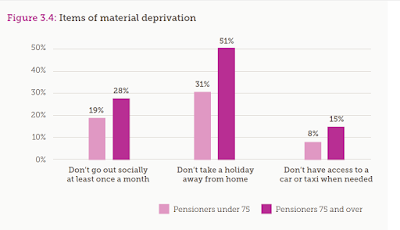 Jack's generation lived through the Second World War and started work, like him, in the 1940s and 50s. Half of them like him are now single and a quarter of these are men. The Report argues that : 'Those who lived through the Second World War must be given the support they need to prosper in their older age, rather than being left behind and overshadowed by their more prosperous successors.'

In order to achieve this goal, the Report made the following recommendations : that the present Conservative Government  should :

Rest assured that, in Britain in 2016, the Government will do little or none of these things on behalf of old men like Jack and his Silent Generation.

Labels: No country for the Silent Generation