Britain is finally a country for and says "Sorry" to old, gay campaigner called George Montague

George is 93 years old, yet back in 1974, when he was 50, he gained a criminal conviction for an an 'act of gross indecency' with another man in a public toilet in Slough. In the last two years George has not been trying to clear his name, but elicit from the Government an apology for the fact that he was criminalised in the first place.

In 1967 in Britain, the 'Sexual Offences Act', decriminalised homosexual acts in England Wales performed in private between two men, both of whom had attained the age of 21. Apart from that exception, the 1956 Anti-Homosexual Laws still applied, with sex between men illegal in all other circumstances. In fact, immediately after decriminalisation there was a big crackdown on gay men involved in 'age of consent violations', cruising and meeting in public places and sexual acts in public toilets and parks and contrary to expectations, convictions for these forms of consenting homosexual behaviour soared.

The number of men found guilty of the gay offence of 'gross indecency', which stood at 420 in 1966, had more than trebled by 1971. It wasn't what the reformers had intended and got worse. Following the moral panic over AIDS, convictions for this offence rose to 1,503 in 1989, compared to only 890 in 1954 at the height of the anti-gay witch-hunts when homosexuality was still totally illegal.

It was against this background that George who was born back in 1924 and after service in the Armed Forces in the Second World War, found himself in his twenties, living in the small village of Hitcham, Buckinghamshire, where he ran an engineering business employing 40 people. He became a scout commissioner and, in his own words "a pillar of the community."

George married and raised a family and in 1974, when he was 50, he went to Slough for the day because : "There was no one else of my persuasion in Hitcham, so I used to go looking for company. There was no internet or gay scene and hardly any bars, so we used to gravitate to 'cottages', or public toilets." George found "the place was empty but for one man in a cubicle" and "went into the adjoining cubicle and locked the door. There was a hole in the wall between" them "a sure sign it was a gay haunt."

George "had a glance through" and finding the man was much older than him "blocked up the hole and waited for him to go, but instead he pushed the paper out and attempted to put his penis through. At that moment there was a scuffling outside and a police officer craned over the top of the door. I was doing nothing; I hadn’t invited any contact from the other man, but the timing was awful. We were both arrested and taken to the police station."

When he was questioned by the police they produced a 'queer list' with his name on it : "They made it their business to find out the name of anyone locally who was gay. They’d do it by arresting a young gay boy and threatening him until he gave them as many names as possible. I was charged with gross indecency and sent for trial. I employed a solicitor and counsel, which cost a lot of money and pleaded not guilty."

George said that subsequently : "The man in the adjoining cubicle to me pleaded guilty, which, I suppose, he was. That was also all over the papers – that he was a married man with children. The disgrace for many men was terrible" but "there was no story about me, despite me being found guilty." He "had a few contacts on the local paper because of my community work, and they were kind. There was suspicion in the scout movement, though, which made me angry and upset. I know the word “paedophile” was used, and that was humiliating. I resigned, which hurt a great deal."

He "was fearful it would come out, though. My wife knew I was gay when she married me – she was a wonderfully supportive woman – but no one else knew: not friends, not my children. I took it in my stride. I came to terms with it and had several relationships subsequently."

Today, George lives in Brighton with his long-term partner of 20 years and back in 2015 he said he was "very angry about what happened to me. I served my country during the Second World War. I don’t want a pardon because I’m not guilty. I’m angry with the Government and the entire establishment throughout the 20th century. They need to apologise to the gay community on behalf of their predecessors and the police need to apologise for the way they enforced the law. There are many men out there with this stigma hanging around their neck."


At the age of 93, he appeared on the BBC's 'Newsnight' Programme last November when he was reacting to the news that the Government was to grant a pardon to gay men like himself who were convicted of sexual offences where the act in question is no longer illegal today. His reaction was : "If I get the apology I don't need a pardon. I don't mind in the least. It's just I want an apology. Not only me. There's apparently, still 11.000 older men like me still alive. My great friend Lord Edward Montague, take him. He served a year in prison and I said to him one day "Come on, surely, you deserve an apology" and he said, like other contemporaries who speak to me when I talk to them : "Oh George, let it lie." Well, I'm not going to." 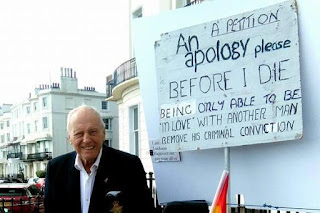 And he didn't. He organised a petition on his behalf and personally presented to the Prime Minister, Theresa May's residence along with his letter :

In 1974, as a Senior Commissioner in the Boy Scout Association, running camps for severely physically disabled boys from six southern counties in the UK, I was forced to resign. As a consequence of the Gross Indecency Law, I was arrested and charged enthusiastically by homophobic police, assisted by provocateurs and informers. If one was born only able to be “in love” with another man, one was automatically presumed guilty.
I, and 49,000 others, still have criminal convictions. I am therefore partitioning for an apology from this government on the part of their predecessors. Some of those past legislators are still alive, often asleep in the House of Lords on £300 per day, many of them refusing to accept the fact that being homosexual is NOT a choice. I agree that any indecency of a sexual nature IN PUBLIC should still be an offence but our “offences” were often “committed” in private. We don’t seek pardons, for that admits guilt (eg; Alan Turing), we believe that these convictions should be quashed.
PLEASE Madam Prime Minister, may we have an apology before I die?

George Montague, aged 93 and author of “The Oldest Gay in the Village” '

Last night on 'Newsnight' George was interviewed by Emily Maitlis and proudly read the reply he had received from a senior official in the Home Office, on behalf of the Government :

Thank you for your letter of the first of November to the Prime Minister about past convictions incurred by gay men, to which I have been asked to respond to your request of an apology from the Government on behalf of its predecessors. Many more lived in fear of being criminalised because they were being treated in a very different way from heterosexual couples. Actually, understand, that we offer this full apology : Their treatment was unfair. What happened to these men is a matter of the greatest regret to all of us. I'm sure that, for the Members across the House, we are, so deeply sorry.
I hope this addresses the concerns you have raised.
Yours sincerely,
John Woodstock

George said, describing his emotion on receiving the letter : "I cannot describe my delight when I opened it. I couldn't believe. I'd hoped we'd get something, but I never thought we'd get such a detailed letter of apology. Wonderful."
http://www.bbc.co.uk/news/uk-39497171

He did, however, add the caveat : "The only thing I'm a little bit concerned about, the whole thing is to me personally. Now, there's 16 - 17,000 other men, many of them did nothing, but they were persecuted by the police and ended up with convictions, some of whom committed suicide. Now, OK, we can't apologise to them but give them at least a postumous apology. Going back to Oscar Wilde, he served in prison for two years. He'd never received any kind of apology." 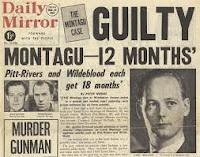 Alan Turing, the genius who was a wartime codebreaker, was granted a posthumous pardon by the Queen in 2013, for his criminal conviction for homosexuality, bearing in mind that he committed suicide in 1954 after his 'chemical castration.' George argued for similar apologies to his friend the late Lord Edward Montague along with the west country landowner Michael Pitt-Rivers and Peter Wildeblood, the Anglo-Canadian journalist, novelist, playwright and gay rights campaigner, who all served time in prison.

George is still inspired by the lessons he learned as a poor boy living with his family in a tied cottage in the 1920s, without either bathroom or toilet, on a large estate with a big house owned by Colonel Handbury in Buckinghamshire where his ex-policeman father was a gardener and his mother, the laundress. It was here that he dug up weeds with the other children to earn some pocket money and :

'It made our fingers sore, but I think it taught me a lesson that would be with me all of my life : if something needs to be done, then best get on and do it.'

George on BBC Radio 4 'The World At One' today : http://www.bbc.co.uk/programmes/p04zrt2x