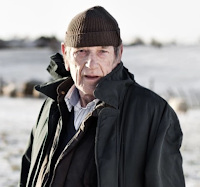 Jim is an 82 year sheep farmer fighting a Hollywood film industry, intent on taking the 24 hectare, Old Pentland Farm in Midlothian, just outside Edinburgh which his family have worked for a hundred years and on which Jim and his mother before him were born. It was first leased from the Gibsone family to his Grandfather in 1915. He now lives there with his wife, daughter, Mary, and Grand daughter. However, if the present owner of the land, Nick Gibsone, has his way the family won't be living there much longer because, with the backing of the approval, 'in principle', of the Scottish Government, the previous objection to the building of a film studio on the on the grounds that it would 'cause significant adverse effects on the character of the local landscape' has been overridden. 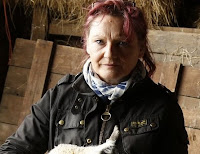 In the face of this, Bill remains adamant : “I’m not moving. No, no, no. There are other places to go for the film studio” and standing alongside him Mary has said : “We will fight it to the utmost” and take their case to the Supreme Court to thwart the proposed building of a £250 million studio. “To lose it would be devastating, hugely to ourselves but to the community – and for something that could be built elsewhere. There’s absolutely no need to be destroying prime agricultural land for this development when there are alternatives.”

Bill has turned down Nick Gibsone's offer of a £250,000 compensation package that would allow him to continue living in the farmhouse until he died and Mary put her finger on it when she said : “At the end of the day money doesn’t mean anything to Dad. He’d rather keep on farming and keep the farm for the community.” 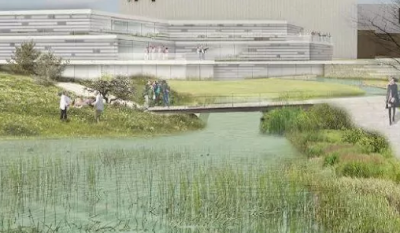 When Jim contemplates the farm's transformation into a studio complex with six sound stages up to 70ft high, a hotel, visitor centre, film academy, workshops and a creative industries hub, he becomes understandably emotional : “I was born there. I could never come back to the place. I could never come back. I could never face the place again, I could not do it. Whenever I wake in the middle of the night I think about them. It’s in the back of my mind all the time.”

Jim's farm, close to Edinburgh, is ideally placed for studio development given the popularity of location filming in recent years and Willy Wands, Chairman of the 'Association of Film and Television Practitioners Scotland' has claimed that Scotland’s lack of a studio was “absolutely a factor” in the new Star Wars film 'Star Wars: The Force Awakens' being filmed in Ireland instead of Scotland. In addition, the latest Avengers film, starring Robert Downey Jr and Scarlett Johansson, is being filmed in Edinburgh but with all the studio filming for the movie is being done in Atlanta, with pre- and post-production in the USA rather than Scotland.

It seems that Nick Gibsone's "hope" will remain unfulfilled in Jim's lifetime : “Since last June, we have asked the Telfer Family to participate with us in independent mediation so that we can discuss this proposal. Whilst we have yet to receive a response to the offer of mediation, it is our sincere hope that this is the chosen path for both parties.”

Jim has the support of Midlothian Council and the banner reading 'Save Jim’s Farm' still hangs on an outhouse where thousands gathered last year to protest against any potential eviction and is still set to hang there for some time yet. Yet Mary bore testimony to the strain from which Bill continues to suffer : “He is under huge emotional pressure. This is his life’s work, not something he can dip in and dip out of. He wants to hand the farm on to his family and hand it down through the generations. He must be crumbling inside. This is not something someone at his age should have to go through.” 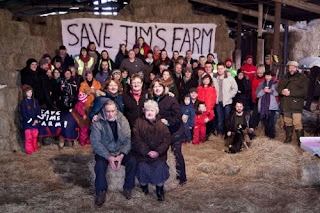