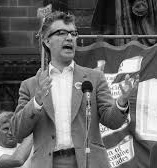 Rodney, who has died at the age of 72, was in the last quarter of the 20th century, one of the best known faces of the British Trades Union Movement. “Bick,” as he was almost universally known, was immediately recognisable by his dark, heavy-framed NHS spectacles and a shock of hair that had many comparing him, fifty years ago, with Buddy Holly. This helped disguise the fact that behind the glasses was a  thoughtful, pragmatic union leader who could be mixing it with Arthur Scargill, the Coal Miners' leader one day and Tony Blair, the Prime Minister, the next.

Rodney's mother, Elizabeth Pearl Bickerstaff, came from a family with a long history rooted in poverty, from the time when, back in the economically depressed 1830s, they migrated from the village that once bore their name near Ormskirk in Lancashire and settled in the mining country of South Yorkshire, where the living was also hard. His great-grandmother, Elizabeth, died in the Doncaster Workhouse as late as 1925 just twenty years before he was born and when his mother was five years old.

Born in 1920, Elizabeth was the eldest of 10 children and no stranger herself to poverty, with the family living, at one time, in a disused railway carriage in a traveller's field. Having left school, almost certainly at the age of 14 in order to work and contribute towards the family budget, she was a resourceful young woman who worked her way through high school and was training as a nurse when, at the age of 19, the Second World War broke out. In the two years previous to this she was working as a children's nurse in South Yorkshire and at the age of 17, was clearly politicised, since she kept a scrapbook relating to events in the Spanish Civil War.

Elizabeth had access to and was cutting from papers across the political spectrum from the Communist Party's 'Daily Worker' on the extreme left, through the 'News Chronicle,' 'Tribune,' the 'Daily Sketch,' and 'Picture Post' to the 'Telegraph' on the right,as well, as, her local, 'Doncaster Gazette.'  She homed in on the extent of human suffering in the war in Spain  and likewise in China, in which civilians were the main casualties and the vain efforts in Britain and by the International Brigade volunteers in Spain itself to prevent this latest triumph for the fascist powers in Europe. She also cut out details of the actions of British workers, members of the International Brigade, engineers, miners, dockers and others in support of the Spanish Republic including the London engineers who had walked out of work in 1939 and marched to Downing Street to demand arms for Spain.

Rodney acknowledged the part played both by the events in Spain and his mother's scrapbook in shaping his political values in the forward he wrote for the scrapbook when it was published in 2015.

Elizabeth was finishing her training in Whipps Cross Hospital, East London, during the 1940 London Blitz and had joined the trade union, NUPE, in the same year. She was working in 'Casualty' four years later when she met a handsome, charming, young Irish carpenter called Tommy Simpson, complaining of stomach pains. He was working in London with his father and, as a result of their romance, Rodney was conceived that summer and born the following spring. By that time Tommy had returned to Dublin with no intention of having any contact with mother and son.

These were the unenlightened 1940s and after Elizabeth gave birth to the son she named Rodney Kevan Bickerstaff, who was given a fatherless birth certificate, she was forced to live, initially, with him in an East London home for unmarried mothers before moving to the 'University Settlement' in Bethnal, East London, where she worked as nurse to a professor. She moved back to Doncaster with Rodney to live with her accommodating parents, when he was two, in a bedroom they shared in the rented Victorian semi occupied by sometimes as many as 10 of the Bickerstaff clan.

It was not a propitious start for a little boy who would one day lead a union of over a million members, but he had and support of his extended family to see him on his way and the love of his clever and resourceful mother who was determined to build a new life for herself. She took a job as a nurse in the local day nursery, eventually rising to the rank of 'matron' and it was here that the little, bespectacled Rodney, learnt the rudiments of the three Rs there. In his primary school playground he fought with boys who taunted him about not having a father and later admitted : "I think I gave one of them a bit of a thrashing, even though he was bigger than me."

In 1956, having passed the 11+ exam, he began his education at Doncaster Grammar School for Boys and in the same year his mother married Norman Topham, a local man whose marriage had ended in divorce and who in Rodney's opinion : "My new dad was as good as gold. He was a wonderful guy."

His school, founded in 1350, carried the motto : 'Confort et liesse', 'Welfare and Jubilation' and would have followed the standard grammar school curriculum, with its dry diet of Latin and Upper class-dominated, Britain-centred world history, devoid of any mention of the rise of trade unions and certainly no analysis of the role of the International Brigades in the Spanish Civil War. Studious young Rodney, no doubt put the hours in the school library, designed by Sir George Gilbert Scott and built in 1869 as part of Victorian Gothic Revival and featuring a large Hammerbeam roof decorated with flowers cut into the massive oak beams.

At the age of 18 in 1963, he took himself off to start life as a sociology undergraduate at Rutherford College of Technology in Newcastle and after graduation in 1966, Elizabeth, herself still only 46, recruited her student son into the union movement and his rise was meteoric : a National Union of Public Employees (Nupe) official in his late 20s, he moved, as an 'Area Officer,' from Yorkshire to Newcastle and later to London. At the age of 36 he was the Union's General Secretary and twelve years later he was the General Secretary of Unison, one of Britain’s largest unions, with 1.3 million members. It was Rodney who had engineered the first major trade union merger between Nupe, the white-collar union Nalgo and the health workers’ union Cohse. He believed that Nupe’s overwhelmingly low paid, blue collar membership could only benefit by coming together with the other more powerful unions.

A fine orator, he took every opportunity to denounce inequality and poverty wages, It was he, more than anyone else, who took up the cudgels for a basic minimum wage for all workers following the winter of discontent of 1978-79, when public sector workers went on strike against the Labour Government’s 'Social Contract'. Two decades later his National Minimum Wage was introduced in 1999 by Tony Blair, a Labour Prime Minister with whom Rodney had little in common, yet for entirely practical and pragmatic reasons, maintained a good-natured working relationship.

In 2009 Rodney said :
"I've been involved with the campaign for the national minimal wage all my working life. I came from a union, originally Nupe. It has always argued way back, into the 20s and 30s that there should be a statutory level of wages below which nobody, young or old, black or white, man or woman should fall and be exploited."

In 2010, while extolling the benefits of the Tolpuddle Festival he said :

"I'm sick and tired of the histories of kings and queens and dukes and duchesses, but nothing about us and our people."

On one occasion, nearing his retirement, Rodney and his wife, Pat, were invited to Chequers, the Prime Minister’s country residence, for lunch. After the meal, an intermediary quietly informed him that Blair wished to offer him a peerage. He immediately and politely declined.