Britain is no country for old men living in Unhappy Hertsmere, but is one for those living in Happy Skipton 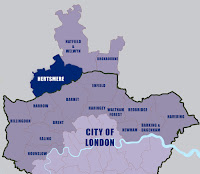 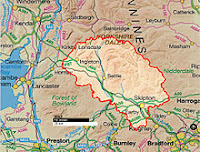 According to the 'Annual Study of the Nation’s Wellbeing', carried out by the Office of National Statistcs, the residents of Hertsmere in Hertfordshire, on the northern edge of London’s suburban sprawl and by implication, its old men, are Britain’s unhappiest. By contrast, at the other end of the spectrum, the old men in Craven, a district council which includes the market town of Skipton and the edges of the Forest of Bowland in the South Yorkshire Dales, are the happiest in the country.

Whitehall statisticians began measuring happiness on the instigation of former Prime Minister, David Cameron in 2011, as he looked for other measures, besides Gross Domestic Product, to measure how the country was doing.

Donald Graham, the Chief Executive of Hertsmere Borough Council, said he was “surprised” by the findings, adding : “Our last 'Independent Residents’ Survey' found that, when asked about the area as a place to live, 90% of residents were 'satisfied', of which 53% were 'very satisfied'." He also said : “Hertsmere is a diverse borough with easy links to London. We have a strong sense of community with committed local partners and engaged residents, alongside a dedicated borough council.”

The league table of Places with the 'Lowest Happiness Ratings' revealed Hertsmere at 6.87, behind Brentwood at 7.01 followed by Glasgow City at 7.02.

Craven District Council Chief Executive, Paul Shevlin said : “As you might expect, I’m very happy to hear this. We’re often recognised as one of the best places to live and this is hardly surprising when you look at our beautiful countryside, brilliant schools, amazing communities and our warm and friendly people.”

The league table of Places with the 'Highest Happiness Ratings' revealed Craven at 8.45,
in front of North Warwickshire at 8.36 and the Orkney Islands at 8.25.

In the corner of 'The Albion,' Skipton's Victorian pub, with his friend Alan, 69-year-old Michael, a retired metallurgical chemist who has lived in Craven all his life, said : “I don’t know whether we consider ourselves to be happier than anywhere else really, but it’s a nice place and we are happy. We might just be simple, I don’t know” to which Alan rejoined : “Well, it’s not because the bloody sun shines, is it ?”

This is not the first time the area has been singled out for its high quality of life because in 2008 the High Street in Skipton beat Portobello Road for the title of the 'Best High Street in Britain' and in 2014 'The Sunday Times' named Skipton as 'The Best Place to Live in Britain'. In addition, in 2016 the 'National Campaign for Courtesy' named the town 'The Country’s Politest Place.'

Simon Myers, a Craven District Councillor and self-described "member or good news", partly ascribed the area’s happiness levels to its self-reliant communities. Sitting in the Bean Loved Cafe in Skipton he said : "They tend to get together and do their own thing" and added : “I wonder what impact the landscape has on us? I mean, there’s a great difference between living surrounded by all this massive, grand openness and living in Hampshire with little farms and hedges and no trespassing signs.” 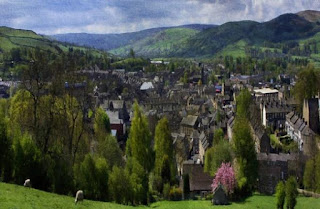 Labels: No country for old men in Hertsmere