Brexit Britain, steeped in nostalgia, is no country for an old author called Alan Garner

Alan Garner will be 84 years old in October and his debut novel, was published when he was 23 years old in 1957. 'The Weirdstone of Brisingamen' is regarded as on of the great works of 20th century children's literature and was followed by 'The Owl Service'. They were both inspired by the Cheshire landscape, in which he grew up. His new memoir, is a series of recollections of his childhood during the Second World War. 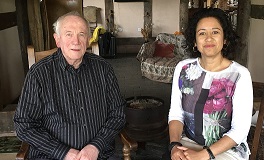 This week, BBC Radio 4 broadcast his interview in its 'Front Row' programme. Samira Ahmed began by asking him :
"Your book is unsentimental and you're quite careful to avoid nostalgia in recounting your childhood, but you'll be aware that, in the country at the moment, there's a huge amount of debate about the past and whether it was better, around Brexit, and particularly this obsession with the Second World War and I wonder if someone like you, who was there at the time, what do you make of Britain's nostalgia for that past ?"

Alan doesn't take words lightly and knows a thing or two about the value of the meaning of words because, as he told Samira : "I missed more than half of my primary school years through dramatic illnesses. I was declared dead three times and I heard it once and that brought me round. The ones that would have killed me were diphtheria, meningitis and pneumonia with pleurisy, but, with the meningitis I also had, at the same time, whooping cough and measles So it was fairly strenuous."

On having been given books to look at, Alan "lay in bed and looked at the words. Some of the big letters were in the pictures and in the story below and some of the little letters were the same as the big. I tried to work out what the strange ones were by putting them together and so, one at a time, I learnt the little letters and after practising over and over, in one moment, I saw I could read everything. I was that excited, I had to stop and lay down flat in the bed. I was shaking and couldn't hold the pages still. The sky was blue with white fluffy clouds and the sun shone on the barrage balloon."

Podcast : https://www.bbc.co.uk/programmes/b0bd6yd2
Interview at 7.47 into the programme

Alan also told The Guardian that : "I think Edgar Rice Burroughs must have had a similar experience. Tarzan is described as seeing the letters on a page as little bugs and then realising that the little bugs fitted together. That was so close to my own experience. I then became a literary gourmand. I just stuffed myself with books."

Having gained a place at Manchester Grammar School for Boys he "learned the hard way that there wasn't much point in rushing home and becoming excited about irregular verbs. But my grandfather, who was a triple smith - blacksmith, whitesmith and locksmith - never said this. He gave me the wonderful advice : "If the other fellow can do it, let him". What he was saying was 'find out what is in you and don't let other people say otherwise', and that has been the single conscious driving force in my life. It haunts me and justifies me."

After leaving school Alan did his National Service as a Second Lieutenant in the Royal Artillery before taking up a place at Magdalen College, Oxford, to read 'Classics.' In his early twenties, although he was active in drama societies, he still wasn't writing and later recalled : "There were lots of people saying they were going to write and they just embarrassed me."

Alan, the gifted linguist would, in his undergraduate years, have a reading knowledge of 12 languages and recalled : "For a time I could absorb any language like a sponge but I still don't understand why I had to learn so many. Was I unconsciously rejecting my real language?"

In Oxford, he once found himself in the same room with those two great wordsmiths, Tolkien and CS Lewis, with whom, incidentally, he would later be compared. He recalled : "I heard Tolkien say that modern English is not a vehicle capable of writing prose." It was back home in Cheshire when sitting on a tree stump at home looking at a wall built by his great-great-grandfather he knew he
: "had to do something that was as well done as that wall. As a writer I had to be true to that wall. When I went back to Oxford it had become a cold and irrelevant place for me."

found Magdalen College, Oxford in 1956 : "a cold and irrelevant place."

Labels: Brexit Britain is no country for Alan Garner