Michael, who has died at the age of 73, was for more than 40 years, at the heart of the British film and television industry, designing sets designed to take the viewer from palatial costume drama interiors to decrepit Cumbrian farmhouses. He will probably be best remembered for his work on 71 episodes of the long-running BBC sci-fi series, 'Doctor Who', from 2010 until 2017 :  https://www.youtube.com/watch?v=UVvv1y156mE

But he will probably best loved for his work on 'Withnail and I' which starred Richard E Grant, Richard Griffiths and Paul McGann. It was this squalid 1960s tale of two out-of-work actors made when he was 43 in 1988 which sealed his reputation and earned his place in the hearts of movie- buffs.

He was born in Windsor in the Summer of 1945 at the end of the Second World War, the son of Anne Payne Cook, a theatre designer and architect and actor William Mervyn Pickwoad, who took the stage name William Mervyn. School was at first St George’s School in the grounds of Windsor Castle itself, before being packed off to the illustrious public school for boys Charterhouse in Godalming, Surrey.

By this time his father was landing bigger film parts and the 13 year old Michael, no doubt went to the cinema to see him play Colonel Buckmaster in Lewis Gilbert's 'Carve Her Name With Pride' in which Virginia McKenna played Wartime SOE agent, Violette Szabo in 1958.

Charterhouse, with its traditions dating back to 1611 and its motto 'Deo Dante Dedi' / 'With God giving, I gave', clearly made its mark on him, as it did on his contemporaries : Max Hastings, future journalist, writer and broadcaster who was in his year and Jonathan Dimbleby, tv and radio presenter and Jonathan King, pop music impresario who were both in the year above him. After leaving school at 18 in 1963, he spent the long vacation working on a cargo ship to West Africa, an experience which he said opened his eyes to “the reality of the extraordinary and the expectation of what something should look like”.

Returning to Britain he took his place studying civil engineering as an undergraduate at Southampton University and after graduation in 1966, with a keen interest in design and mechanics, coupled with his parents’ background in film and the theatre, a career in set design seemed an obvious step.

Michael's road to Withnail began when he was 25 in 1970 and employed as 'Assistant Set Dresser' on  'The Man Who Haunted Himself' starring Roger Moore and this was followed by his promotion to Art Director on 'Blinker's Spy Spotter' the following year. This was followed by work on
27 movies over the next seventeen years, including Richard Eyre's 'The Ploughman's Lunch' in 1983. His final promotion to 'Production Designer' came when he was 42 and with 'Jane and the Lost City' in 1987 and was followed by 'Withnail and I' in '88.

It was Michael's sets : the actors’ seedy London flat : 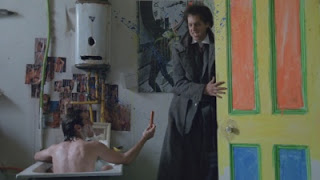 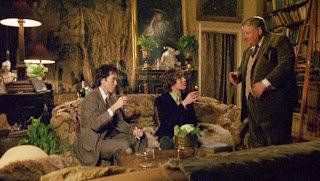 and the spartan 'Crow and Crown' pub : 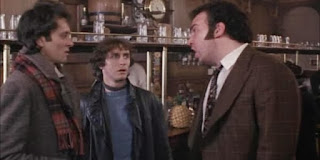 which have fixed the film in the popular imagination of so many ever since. In 2012 Michael said : “So many people say it is their favourite film. It’s wonderful to watch as it was so beautifully written. It was a lot of fun setting it too, especially recreating the feel of the 1960s. I enjoyed the reality and absurdity of it and finding all those wonderful items.”

“I loved Withnail’s kitchen. We found a lovely flat in Bayswater and had to knock a hole in the wall. On the day before we were supposed to start filming I sent out for a Chinese takeaway and smeared sweet and sour pork all over the plates in the sink to make it look realistic. We didn’t actually start filming until four days later, though, so when you see them pulling food out of the sink it really was as disgusting as it looked. Health and safety didn’t mean the same thing back then. It was a wonderful scene.”

Thinking back to his own 1960s Michael said : “It wasn’t inspired by my flat, but by the things I had seen.”

Paul McGann has said : "I honestly think that without the idiosyncratic genius of designer Michael Pickwoad we mightn't be talking about the picture at all today. It was his attention to detail that astonished Bruce Robinson when we first walked onto set. I remember Robinson saying to us, 'Good god, this is just how it was---he's recreated it exactly!'"