Terry, who is 79 years old, was born in Royston, Hertfordshire just before the start of the Second World War in 1938, was 19 when he was 'called up' for his two years National Serviceman attached to the Royal Army Service Corps. It was at the height of the Cold War between the West and Soviet Russia in which nuclear bomb testing was a regular feature of the brinkmanship which underpinned the War. It was also a feature of a vastly weakened post-War Britain, desperately keeping up with its American ally. He was one of 4,000 servicemen based on Christmas Island in the Pacific in 1958 and served as a 'B3 Specialist'  working with the Atomic Weapons Research Establishment and was there to move the equipment for the bombs back and forth.

Today, those exposed to nuclear radiation are covered in protective gear and avoid any sustained contact. Terry, as part of his 'service', along with the 109 other men in his unit, was exposed to 5 nuclear bomb test explosions with 4 hydrogen bombs 22 miles away and the one atom bomb less than 9 miles from where he was based. He was provided with no protective clothing and in the blistering tropical heat, was wearing nothing more than shorts, boots, puttees and a jungle hat. When a detonation was due, he was told to sit on the beach with his back to the blast with his eyes closed with his fists covering his eyes.

Terry recalled :  “It was terrifying hearing that countdown and then when the bomb went off it was so bright I could see through my hands, I could see my bones and the blast pushed us back along the ground. The blast and radiation flattened the palm trees in front of us and tossed the boats out of the water, it was terrible.” The boats in question were landing craft from HMS Narvik. In addition, "It singed the hairs on the back of your neck and of course the noise - the noise from a hydrogen bomb is unbelievable."
https://www.youtube.com/watch?v=4AlUJUWoIzY&t-1m13s 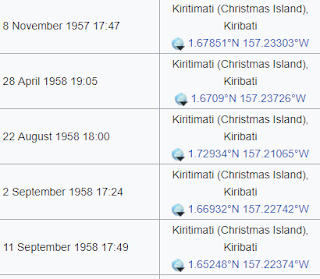 
800 Kilotons
In the aftermath of the blasts Terry remembers seeing : dead fish within a 50 mile radius ; liquidised coral and crystalised sand, turned black. Some men were asked to search the island to catch and kill birds so they wouldn’t fly away and spread radiation and they found the animals lying on the ground where they could easily pick them up.

The British veterans of Christmas Island and other nuclear test sites in the Pacific and around Australia have never been awarded a medal for their service or compensation for their ill health afterwards. It is thought around 21,000 British servicemen witnessed the tests.

Terry has said : “So many died from radiation and cancer and more than that when they had children they were affected too. So many were born with unexplained ill health and some with congenital deformities, all kinds of diseases and we are now seeing that is being passed on to their grandchildren. It’s dreadful. The MOD is insistent to this day that we had protection and that the bombs were exploding so high that they wouldn’t bother us, but there were no safety measures. We were living in these areas in tents, pilots were flying through the mushroom clouds to collect samples with no protection whatsoever and they died. I believe we were guinea pigs really.”

He was contacted by the British Nuclear Test Veterans’ Association who told him there were not many from the Island tests were still alive which prompted him to try and find his colleagues. So far he hasn’t been able to locate a single person in his unit. He is now working with the charity to raise awareness and get recognition for the veterans and their families. Terry said : “Other countries who had people stationed at the nuclear test sites have compensated and recognised their veterans. New Zealand, Fiji, Australia, America, but not us.”

Terry himself suffered health problems after the tests : “I was always a very fit and healthy man, but a couple of years after I left Christmas Island a swelling came up on my side. It got harder and more painful and grew so large I could rest my arm on it. I went to Oldham Royal Infirmary and they operated on me straight away. The doctor described it as a tumorous growth like bunches of little berries and he cut it all out. I can’t say for sure, but I believe it is a result of what happened on Christmas Island because I found out later so many of my colleagues were dying of cancer.”

In addition, in one test : "I was hit in the soft part of my throat during a blast. I thought it was a piece of coral or something, but years later I was having pains and they discovered a foreign body. In 2004 during my triple heart bypass they took out a piece of 8x4mm steel shrapnel, pointed at both ends, which was only an inch away from my heart.”

Given the fact that France, the USA and Australia have all given compensation to their test veterans Terry said : “We have been totally ignored and yet it is still affecting families to this day. It feels like they want to sweep it under the rug until there are none of us left, but there will always be voices and they won’t be quieted. We were young when we went out there and we trusted what we were told. We have been let down and it needs to be put right.”

Terry, along with the British Nuclear Veterans and his daughter Anne are speaking out about the experiences of the veterans and their families and have lent support to an e-petition asking people to sign a request for a plea to be made in a committee room in the House of Commons that those who were involved in the tests receive recognition and a medal for their service.

"It's dreadful really; the fact we never got any recognition
whatsoever, not even a thank you. We were just swept aside." 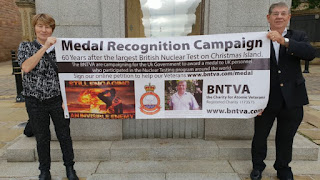 "The very least they could do is give us a medal."